(Las Vegas)–Taiwan’s Kevin Cheng captured the inaugural WPA Players Championship on Friday, storming back from the near dead to defeat the Philippines Carlo Biado, 12-11, in a thrilling final at Griffs Billiards in Las Vegas.

The victory capped a terrific week for the Taiwanese sharpshooter, who showed that not only is he one of pool’s hottest sharp shooters, but also that he is a resilient, never-say-die fighter that can grind it out with the best of them.

It was that trench warfare mentality that helped bring Cheng back from the dead, as he was down 8-5 in the race to 9 final and was sitting in his chair watching Biado clear for the title. It was only when the Filipino unexpectedly missed a 4-ball that Cheng felt a slight heartbeat. He proceeded to win the next four racks, and then slugged it out in a nervy 45 minute stretch with Biado in the win-by-two format, until the pair reached the limit of 11-11 all and played one rack for the title, which Cheng won.

The Taiwan-Philippines final seemed only fitting as the day began with two Taiwan-Philippine semi-finals.  In the first semi, Cheng squared off with Johann Chua and quickly got out to a 4-1. But as he had done all week, Chua stormed back to tie the match at 4-4. The pair stayed even for the next few racks, until the Filipino made several mistakes that opened the door for Cheng.  The Taiwanese then zeroed in on the finish line and won 9-6.

In the second semi-final Biado matched wits with the always daring Chang Yu Lung.  Nothing much separated the pair for the first half of the match. But despite having several chances to take the lead, Chang seemed to run out of gas. That was all the always-focused Biado needed to build up a head of steam and win 9-6.

The race to 9, win-by-2 final was everything one would expect between two of the best not only of their respective countries, but in the entire world of professional pool. After splitting the first 8 racks, Biado upped his game and won the next two to lead 6-4. Cheng got one back, but then the Filipino showed off his amazing potting and cue ball skills to go up 7-5. Cheng looked to be on the back foot when he missed the 4-ball in the next frame, which allowed Biado to clear and move one away from the title.

And it certainly looked like it was all over in the next rack with the Filipino at the table and a fairly straight forward clear right in front of him. Until he missed the 4-ball in the side.

As expected, the entire match turned on that one miss, with Cheng suddenly playing loose and free, and Biado retreating into a shell and looking nervous. Indeed Cheng won the next five racks, including two break and runs, to go up 9-8.

But Biado isn’t the World #3 ranked player for nothing, and he stormed back to take the next two to lead 10-9 and move one away from victory again. The pool gods, though, conspired against the Filipino as he broke dry in the next frame and allowed Cheng to clear to tie at 10-10.

Cheng inched closer in the next frame after winning a safety battle. But in the next rack, the Taiwanese left a safe open, and Biado cleaned up the colors. Tied at 11-11, the match and the title went to a one rack decider. 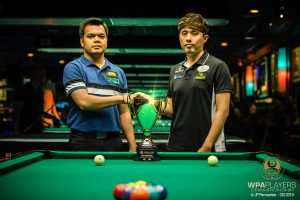 “When I was down 8-5 and he is shooting at an open table, I already know that I’m going to lose,” a relieved and delighted Cheng said afterward. “Then when he missed that 4-ball, I can play without stress and I played really good.

“The last few racks were very difficult and that’s when I got nervous again. I think I got lucky, but I also hit some very good shots at the end to take the match and the tournament.

“Overall, I’m very happy with the way I played this week. It was a great tournament, with a great field, and this gives me a lot confidence heading in the US Open.”

The online tournament brackets can be found at www.CTSonDemand.com.

The World Pool-Billiard Association (WPA) is the international governing body for pocket billiards and is comprised of six member federations representing North America, South America, Europe, Asia, Africa and Australia. The WPA is the world-recognized body for sanctioning World Championship events. It is also one of the three member organizations of the World Confederation of Billiards Sports (WCBS), representing the billiard disciplines of pool, snooker and carom. For more information about the WPA, visit www.wpapool.com.

CueSports International (CSI) is an international pool league and event leader and is currently comprised of three divisions: CSI leagues, CSI events and CSI media. CSI leagues manages the BCA Pool Leagueand USA Pool League, CSI events produces numerous amateur and professional events around the globe and CSI media creates live streaming and digital content. Through its vision and strategic alliances, CSI is “shaping the future of pool.” For more information about CSI or any of its divisions, visit www.playcsipool.com or find CueSports International on Facebook, YouTube, Instagram and Twitter.

The WPA Players Championship is made possible by the following sponsors: