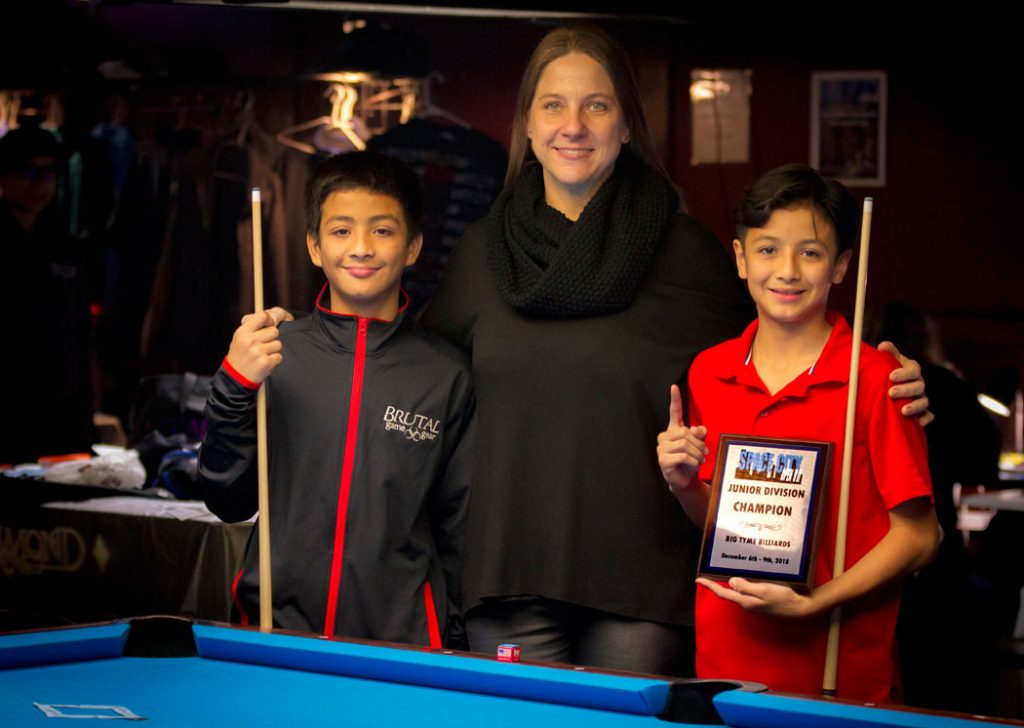 James Davis, Jr., “Junior”, of Austin, Texas, went undefeated in a 128-player field, to win the Space City Open VII, open 9-ball title, becoming the second player to win it twice. Josh “The Beast” Roberts not only defended his one pocket title, but finished second in banks, and thirty-third in the 9-ball, earning himself the “All-Around” title, and a hefty $1,500 bonus. First-time competitor, Evan Lunda of Detroit, Michigan, cleaned up in the 32-player, 9-ball banks division, going hill-hill with only a single opponent. In the 32-player, ladies 9-ball, Ming “The Empress” Ng redeemed herself in the second set of the true, double elimination final, securing her second title, and becoming the first, two-time winner in this division. Nine junior players, including eight young men, and one young lady, traveled from across Texas to compete in their very own division. Lazaro “Little Laz” Martinez, III, of San Antonio, Texas, went undefeated in this category, earning the first win in this division debut.

This year’s $7,500 added, Space City Open VII, was held December 6th-9th, 2018, and implemented a number of positive changes, including a $1,500 All-Around bonus, and a seventeen-and-under, juniors 9-ball division. In its seventh year, the “derby-like” event, now hosting five divisions over four days, was also held at a brand new venue. Big Tyme Billiards in Spring, Texas, stepped up to host, generously adding $4,000 to the purse, providing twenty Diamond bar tables and six nine foot tables, on which to compete. Twenty-six, brand new, Cyclop “Zeus” ball sets, and Accu-Racks by Outsville, were provided by Space City. The bar tables were a popular change from the eight foot tables used in previous years (for the open 9-ball division), and the format changes for one pocket and banks were also a huge hit. These divisions were still held on nine foot tables, but in a single elimination format as opposed to double, and the consensus was clear. Players loved the expediency, along with the added pressure and intensity of the “one-and-done” arrangement. For the first time, all divisions filled, with players on stand-by.

The open 9-ball division presented a monstrous, challenging field, played on the great equalizer; the bar table. On the road to victory, James Davis, Jr. defeated Matt Williams, Charlie Bryant, 9-8, Evan Lunda, 9-8, and Shelby Green, 9-5, to reach the winners’ side final eight. Espinosa logged wins over Angelina Dean, 9-1, Marshal Ward, 9-2, Eric Aicinena, 9-4, and Victor Rojas, 9-7, while Danny Smith defeated Mike Landry, 9-2, Colton Berzins, 9-1, John Morra, 9-5, and Mike Alonzo, 9-8. Jamie Baraks made quick work of Beto Cavazos, 9-3, Rick Moreno, 9-3, David Thomas, 9-7, and Shane McMinn, 9-4. Houston’s Andy Jethwa passed Grady Cooper, 9-1, Mark Galicia, 9-5, Sylver Ochoa, 9-8, and Corey Flud, 9-6. Richie Richeson ousted Alan Myers, Jerry Miller, 9-8, David Chow, and Billy “Big Tyme” Sharp, 9-4, while Alex Calderone overcame Chase Wheeler, 9-2, Ricki Casper, 9-6, Aaron Springs, 9-7, and Germany’s Can Salim, 9-8. On the one loss side and in the money, Kenneth Price upset Chris Robinson, 7-5, and bested Flud, 7-7, while Morra topped Curt Sheldon, 7-3, and Shelby Green, 7-2. Bryant subdued Angel Mentzel, but fell to Sharp by the same score, 7-2. Galicia upended Aicinena, 7-4, but fell to Salim, 7-2, while Moreno won an impressive five matches, ousting Springs, 7-3, and Rojas, 7-4. Following a second round loss to Morra, Ernesto Bayaua made a phenomenal comeback, securing five matches, including wins over Derek Fontenot, 7-3, and Poon, 7-0. Jesus Atencio, on a similar mission, marked up five on the one loss side, among the ruins, Reginal Samples, 7-1, and Alonzo, 7-5. Jimmy Krone racked up five victories on the one loss side, but was stopped by Ochoa, 7-4. Ochoa was taken out by McMinn, 7-6, wrapping up top sixteen action. Back on the east side, Espinosa throttled Perez, 9-1, Baraks triumphed over Smith, 9-7, while Davis, Jr. snuck by Jethwa, 9-7, and Calderone inched by Richeson, 9-8. Espinosa squeaked by Baraks, 9-8, and Davis Jr. served it up cold to Calderone, 9-4. The hot seat match-up marked an Austin-area shoot-out, and a short-lived set for Espinosa, who sustained his first blow from Davis, Jr., 9-5. On the west side, Morra took a stand, ending Price, 7-3, and Perez, 7-2, while Salim took out heavy hitters Sharp, 7-3, and Smith, 7-2. Bayaua recorded his seventh win on the one loss side, ending Moreno, 7-1, and Jethwa, 7-3. Ochoa finished off Atencio, 7-3, but fell to Richeson, 7-5. Salim went on to defeat Morra, 7-5, and Calderone, 7-3, while Bayaua buried Richeson and Baraks, 7-3. Bayaua registered his ninth win, but no more. Winning the case game against Bayaua, Salim secured his sixth win, and slid into third place. Espinosa was ready for Salim, but got off to a slow start. At a 6-3 deficit, Espinosa came back to win, 7-6, earning himself a second shot at Junior, and the title. Once again, Espinosa found himself in troubled waters, as Davis was in perfect rhythm with the table, and couldn’t be denied. Davis Jr. surged to a 9-3 win, and his second 9-ball title since the inception of Space City.

In the one pocket division, Josh Roberts took no prisoners, eliminating Charlie Bryant, Jamie Baraks, and Chris Robinson, 4-3, while Alex Calderone defeated Greg Trent, Jim McCary, and Sylver Ochoa, 4-2. Local favorite, Richie Richeson, defeated Marc Garza and Manny Perez, by the same score, 4-1, and John Morra, 4-1. Ernesto Bayaua rounded out the final four, booking wins over Bobby Roland, Aaron Springs, 4-3, and Evan Lunda. In the final four round, Roberts shut-out Calderone, 4-0, and Richeson slid past Bayaua, 4-3. For the first time, Richeson found himself at the end of the board, facing the defending champion. The pressure was on, as both players were in close running for the All-Around bonus. In the final, numerous games came down to the case ball. The fans were treated to an offensive juggernaut; a display of maneuvers and banks, not soon forgotten, but even the creativity of the venerable Richeson, was not enough. With an accounting of two, eight-and-out runs, Roberts was up 3-2, with one ball remaining in game six. Following an unforced error by Richeson, Roberts took it home, along with his second, Space City Open one pocket title. 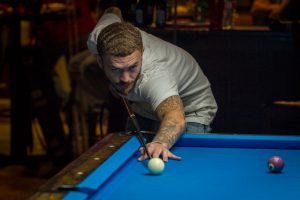 On Sunday morning, thirty-two women started battling it out in the ladies 9-ball division. The 2013 ladies 9-ball division champion, Ming “The Empress” Ng, began her trek with wins over Terri Resendez, 7-2, two-time ladies 9-ball champion, Gail “Virginia Slim” Eaton, 7-6, and Kim “Texas Heat” Pierce, 7-1, as Robyn Petrosino plowed through Ruth Paine, 7-0, Brittany Kromer, 7-3, and Teresa “Princess of Pool” Garland, 7-1. Yvonne “Casher” Asher made her way to the cash, defeating Karen Reilly, Tam “MZ Tam” Trinh, 7-3, and Jillian Nickerson, 7-6, while Ricky “The Ghost” Casper, drifted past Matty Sword, 7-1, Sara Bork, 7-3, and Hopey “Hurricane” Lawrence, 7-2. Ng went on to shut out Petrosino, 7-0, and Casper stopped Asher, 7-4. In the hot seat match, Ng emerged victorious over Casper, 7-4. On the one loss side and in the final eight, Pierce and Eaton shut out Garland and Nickerson, respectively, 5-0. Pierce derailed Asher, and Eaton eliminated Petrosino, moving into the final four. Eaton went on to eliminate Pierce, 5-0, and Casper, 5-4, to meet Ng in the finals. Ng, going for her second title, and Eaton, searching for her third, battled to the bitter end. In the first set, Ng simply couldn’t get it together, and Eaton was on fire, taking the first set, 7-1. Following a five minute break, the second set got underway. This time, Ng took her turn, beating Eaton 5-3, to win her second, Space City Open title.

Space City Open VII goes down in the record books as the most successful one to date. “I have no words for the outpouring of support from the Texas pool community. Even with the last minute venue and format changes, the event over-filled. Billy Sharp and Deborah Sharp of Big Tyme Billiards came through for all of us” commented Kim Newsome, Space City Open Founder and Director. Space City Open extends a heartfelt “thank you” to everyone involved in the production of this event; John Newsome and Johnny Gonzales of Eagle Plumbing who sponsored the $1,500, All-Around bonus; staff members Kim Newsome, John Newsome, Erica Hanlon, and Chuck Adams who managed every facet of the event; Ceferina Ramirez and Ruth Paine for their contributions; Mike Fabacher with Southern Streaming who provided a free, four-day live stream; Chris Lue of Next Action Media, whose photographs captured the essence of the event; sponsors Roger Schuett with the APA of North Harris County, Mike McDonald of VaporKnightsUSA.com, Poison by Predator Cues, Cyclop Pool Balls, Chris Renfro with Outsville Billiards, Charlie and Heather Bryant of Brutal Game Gear, and David Taylor and Teresa Garland with Houston Best of Billiards; vendors Jerry Olivier Cue Repair, Joe Salazar Connoisseur of Custom Cues, Arthur Politte with Qxtender.com, Darrold Stiehl with Champions Cues, and Brutal Game Gear.

Finally, Space City would like to extend its deepest gratitude to the players who support this event, year in and year out. Without the players, none of this would be possible.

Space City Open is one of the biggest billiard events in Texas, and is held annually, the first week in December. For more information, visit www.SpaceCityOpen.com. 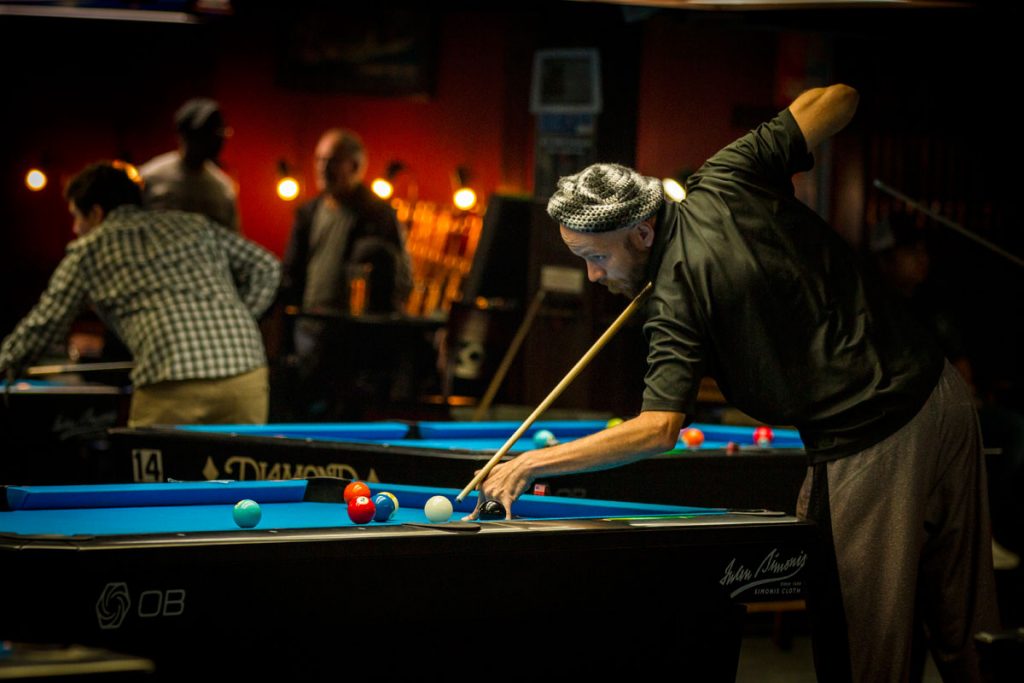 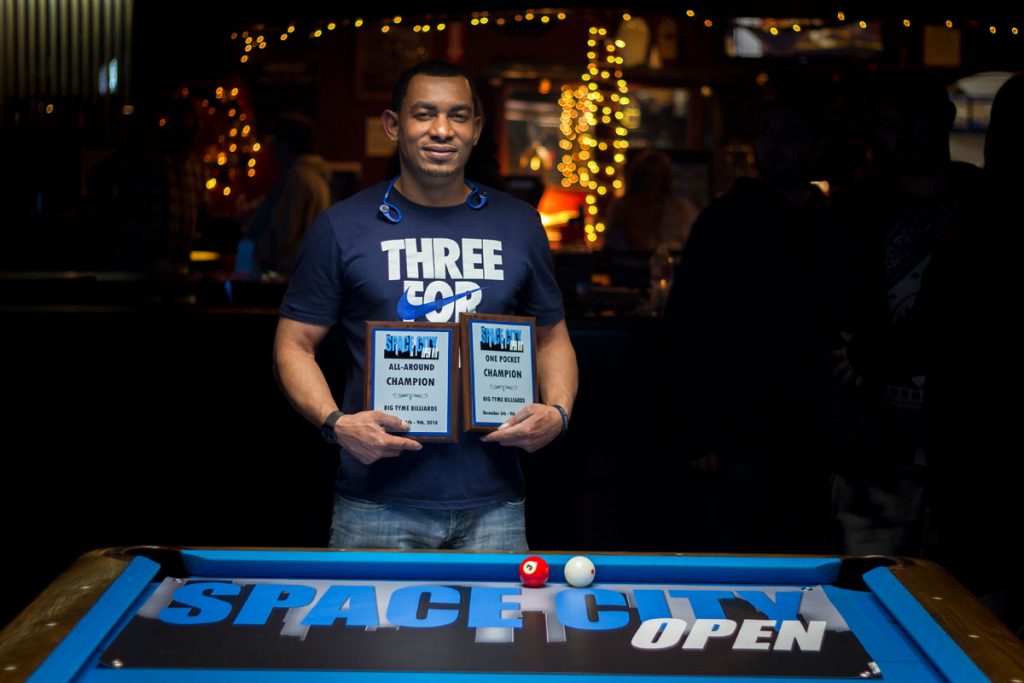 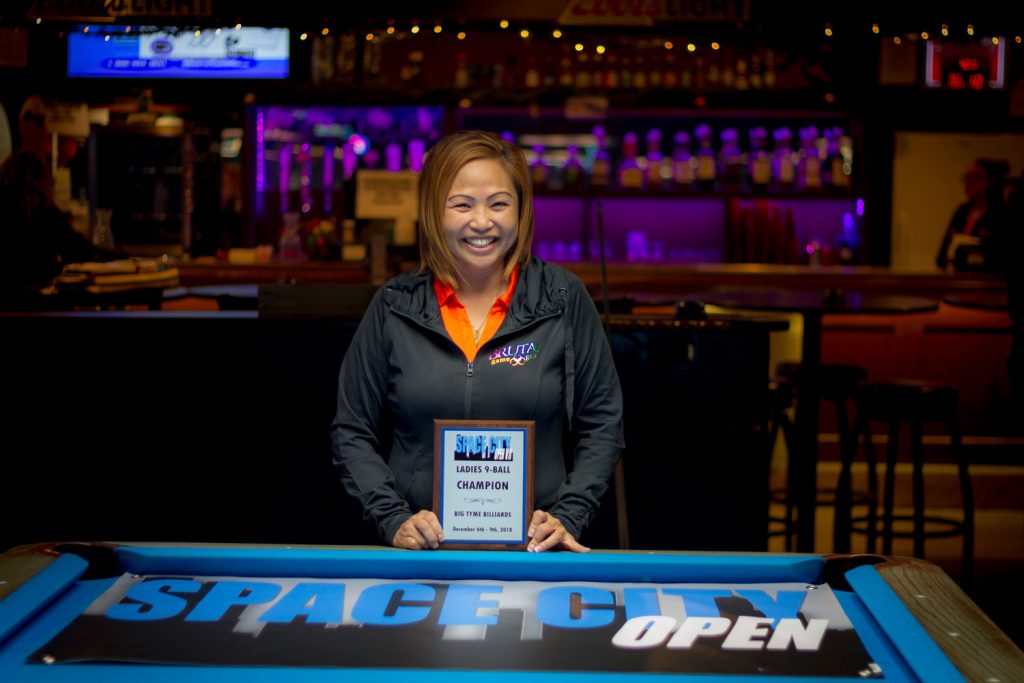 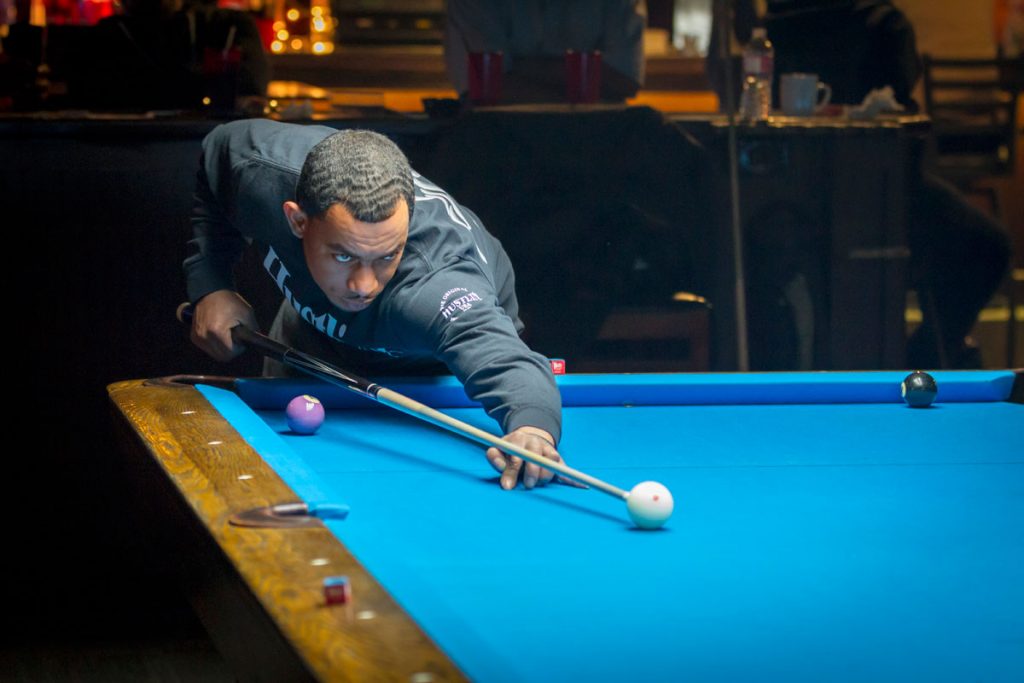