Whether he’s making an uncharacteristic runout look routine or sending the cue ball and object ball into multiple rails to lock down a creative safety, Chris Melling has always shown the ability to make the difficult look easy. 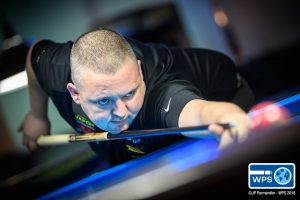 The 39-year-old from England had all aspects of his game on display in his quarterfinal match in the Aramith 9-Ball Players Championship Saturday night. Facing the previously undefeated Fedor Gorst of Russia, Melling jumped out to an early lead that he never relinquished – easily defeating Gorst 13-7 at Steinway Billiards in Astoria, Queens to nail down the final spot in the event’s semifinals.
“Overall, I thought I played as well as anybody could possibly play. I don’t think I missed a clear shot. I think every time I had a clear shot I made it,” Melling said.
Melling used a pair of breaks and runs to jump out to an early 6-3 lead in the winner-breaks, race-to-13 format. Gorst then won a safety battle and mixed in a pair of runouts of his own to knot the match at six games each. After Gorst missed a combination shot on the 2-ball in the 13th game Melling used a pair of victorious safety battles and a break and run to extend his lead to 10-6. Gorst would scratch out another victory to narrow the gap to 10-7 but was never again a factor as the Derby City Classic 9-ball champion took advantage of a pair of misplayed safeties and a run out to finish off the match.
Gorst, who was undefeated in the event, struggled with unforced errors throughout the match – many times either missing position on a ball or failing to execute a planned safety.
“I didn’t feel comfortable before the quarterfinal. Actually, I made some stupid mistakes and that’s why I lost,” Gorst said after the match.
“I’ve got nothing but the utmost respect for Fedor Gorst. What an unbelievable player. If he doesn’t win a couple major events by the time he’s 25 I’ll be amazed,” Melling said of his opponent after the match.
Melling will face Alex Kazakis of Greece in the semifinals Sunday at 2 p.m. Eastern Standard Time. Kazekis out-scored Jason Klatt in an overtime sudden death shootout to earn a spot in the Sunday section of the bracket. The other semifinal will pair Denis Grabe of Estonia against Dennis Orcollo of the Philippines. Grabe advanced to the semifinals with a 13-3 pasting of Finland’s Petri Makkonen while Orcollo also needed sudden death to knock off Canada’s John Morra.