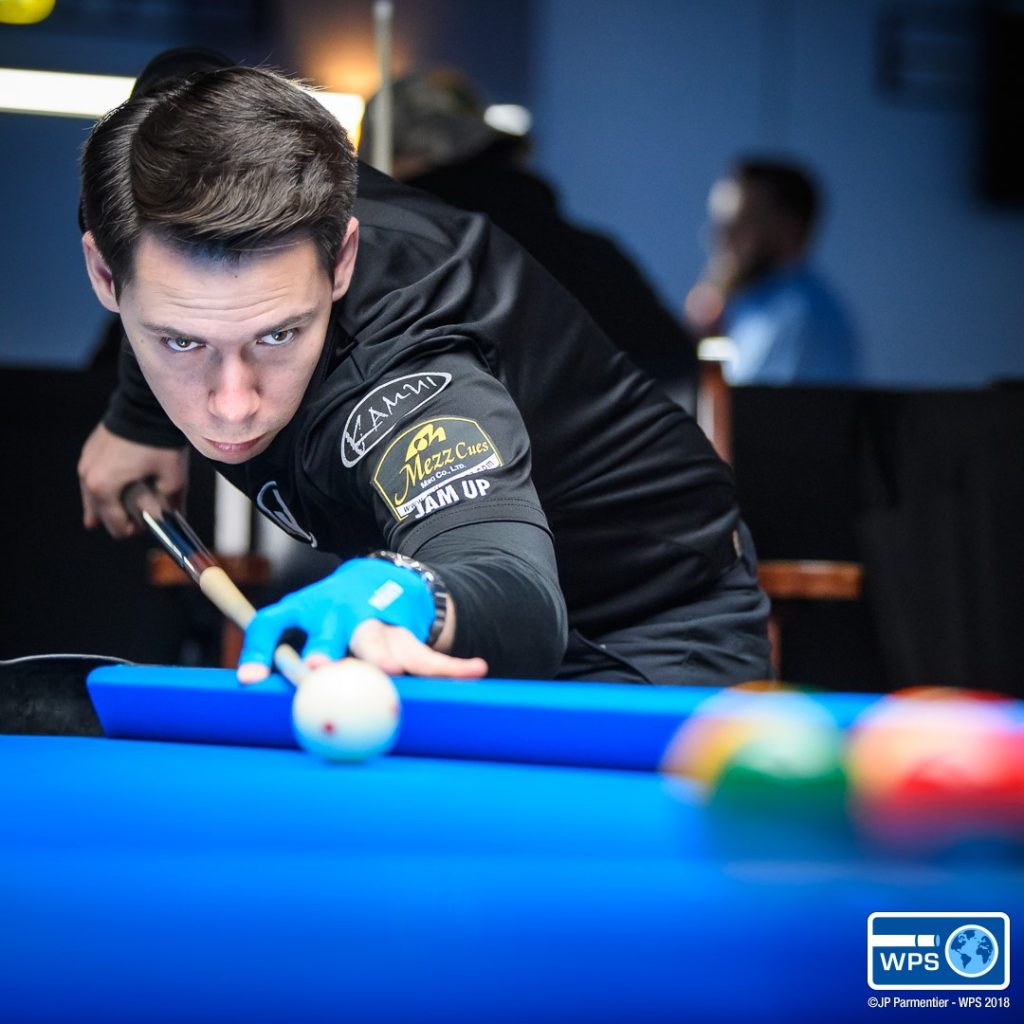 Aramith 9-Ball Players Championship’s First Day Done
The evening session of the Aramith 9-Ball Players Championship’s first day resulted in a pair of stunning upsets – with Canada’s Alex Pagulayan and Germany’s Joshua Filler becoming two of eight players eliminated from this weekend’s 32-player tournament.
Playing on the one-loss side of the bracket after a first-round loss, Pagulayan was upset 11-8 by California’s Chris Robinson – a three-time state junior champion and the 2015 Billiard Education Foundation national junior 9-ball champion.
Robinson jumped out to a fast 3-0 advantage and had built an impressive 7-3 lead but a couple of positional errors allowed Pagulayan to climb back into the match. Pagulayan had a chance to cut the deficit to 8-7 but miscued on the 6-ball, giving Robinson ball-in-hand and a three-game lead. Pagulayan cut the lead to 10-8 but broke dry in the 19th game, allowing Robinson to run out the game and close out the match.
Filler, who also was playing on the one-loss side, was taken out by fellow countryman and Mosconi Cup teammate Ralf Souquet, who handily defeated the 20-year-old, 11-4.
The four-day, double-elimination tournament – which is the first leg of this year’s World Pool Series – will resume again 11 a.m. Eastern Standard Time Friday morning at Astoria’s Steinway Billiards. The morning session will begin with eight matches from the one-loss division, including Souquet taking on another fellow countryman in Thorsten Hohmann and Jayson Shaw facing Canada’s John Morra.
The afternoon session will begin at approximately 5 p.m. eastern standard time, with the eight remaining players on the winner’s side of the bracket squaring off – including fellow Filipinos Dennis Orcollo and Lee Vann Corteza matching up and as well as Russians Fedor Gorst playing Ruslan Chinahov.
For the complete draw and live scoring please CLICK HERE.
The first event of the 2018 World Pool Series, The Aramith 9-Ball Players Championship, is being held at Steinway Billiards in Astoria, Queens, New York City from April 19th to 22nd, 2018. The World Pool Series is sponsored by Aramith, Rasson, Predator, Iwan Simonis, Tiger, and Kamui. Our suppliers and partners are Billiards Digest, CueScore, Let’s Go Print, On The Wire, Outsville, UpState Al, and the WPA.
For more information on the World Pool Series, please visit www.worldpoolseries.com.
Follow the World Pool Series on social media:
Facebook: https://www.facebook.com/worldpoolseries/.
Twitter: @WorldPoolSeries
Instagram: @WorldPoolSeries
To watch our PPV livestream, you can visit www.worldpoolseries.com and click the “Live Stream” button to go to our streaming page.