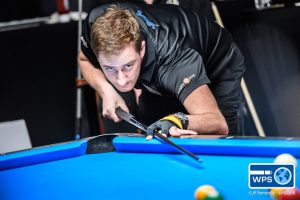 With eight players competing for the four remaining spots in the quarterfinals of the Aramith 9-Ball Players Championship, many of Friday night’s matches came down to the wire.
Canada’s John Morra and Jason Klatt, England’s Chris Melling and Denis Grabe from Estonia all advanced from the one-loss side and will face the final four players remaining on the winner’s side of the bracket beginning Saturday morning.
Morra appeared in control through most of his match against Lee Vann Corteza of the Philippines, jumping out to an early 7-0 lead in the winner-breaks, race-to-11 format. With elimination on the line, Corteza wasn’t about to go quietly as he slowly strung together a few wins – at one point cutting the deficit to 8-5. That was as close as the Filipino would get, however, as the Derby City Classic 9-ball runner-up closed out the match, 11-7.
Countryman Klatt found himself in an even tougher battle with Finland’s Mika Immonen. The two men traded games back and forth throughout the match, with the score tied after 16 games until Klatt pulled away to win, 11-8.
Grabe battled Russia’s Ruslan Chinahov in the featured match of the night, with both men taking advantage of mistakes, miscues and missed shots in a contest which remained tight from the beginning. Leading 9-8, Chinahov missed a 2-ball in the corner pocket in the 18th game and allowed Grabe back to the table to tie the match. Grabe then used a fortunate roll on the 3-ball in the 19th game and another missed 2-ball by Chinahov to close out the set, 11-9.
Melling jumped out to a fast 5-0 lead against Albania’s Klenti Kaci but watched as the two-time World Pool Series victor clawed back into the match, knotting the score at eight games apiece. Melling would rally, winning three of the final four games, to close out the match and head to Saturday’s quarterfinals.
Shortly after the final match concluded at Astoria’s Steinway Billiards the brackets were randomly re-drawn as the tournament transitions to single-elimination for the remainder of the event. Additionally, the matches will now expand to a race-to-13 in the quarterfinals and semifinals.
Saturday’s slate begins at 11 a.m. Eastern Standard Time when Petri Makkonen of Finland takes on Grabe. The second match will pair Dennis Orcollo of the Philippines against Morra at 2 p.m. and Alex Kazakis will play Klatt in the third quarterfinal at 5 p.m. Russia’s Fedor Gorst will take on Melling in the final match at 8 p.m. Eastern Standard Time.
The winners of Saturday’s matches will move on to Sunday’s semifinal matches, with the winners moving on to play in Sunday evening’s race-to-17 final.
The Aramith 9-Ball Players Championship, which is the first leg of the World Pool Series, will conclude Friday’s competition at 8 p.m. with four matches from the one-loss side of the bracket.

Hohmann Victorious in the Battle of the Germans
Germany’s Thorsten Hohmann used a pair of perfectly executed jump shots to survive the morning session of the second day of the Aramith 9-Ball Players Championship in New York.
Hohmann matched up against countryman Ralf Souquet on the one-loss side of the bracket at Astoria’s Steinway Billiards, with the two players trading the lead back and forth for the first 16 games. After Hohmann gutted out the 17th game to pull ahead nine games to eight, the two players exchanged safeties on the 2-ball in the following rack. Hohmann grabbed his jump cue and pocketed the ball with a flawless table-length jump shot and then ran out the rack. Hohmann then jumped the 3-ball in the 19th game, setting up the game-winning run out to defeat Souquet, 11-8. 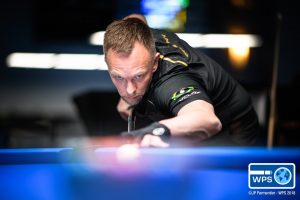 Hohmann advances to face two-time World Pool Series winner Klenti Kaci of Albania in a 2 p.m. Eastern Standard Time match.
In other matches, California’s Chris Robinson battled back from an early deficit but was ultimately eliminated by Radoslaw Babica of Poland, 11-9. Trailing 9-5, 2015 Billiard Education Foundation junior champion rallied in the winner-break format to cut the lead to 10-9. Robinson, who eliminated Alex Pagulayan 11-8 the previous night, looked poised to tie the match at 10 games apiece but misplayed position on the 6-ball – leaving the cue ball hidden behind the 8-ball. Robinson failed to convert a jump shot and Babica closed out the game and the match.
Canada’s John Morra eliminated Jayson Shaw, 11-8, and will face Nick Malaj in the afternoon sessions. Denis Grabe defeated Ronnie Alcano of the Phillipines, 11-6, and Mika Immonen cruised to an 11-3 victory against Zion Zvi.
The eight remaining players on the winner’s side will square off later today, with fellow Filipinos Dennis Orcollo and Lee Vann Corteza matching up as well as Russian Fedor Gorst taking on countryman Ruslan Chinahov, who won last year’s Molinari Players Championship.
The Aramith 9-Ball Players Championship, which is the first leg of the World Pool Series, will conclude Friday’s competition at 8 p.m. with four matches from the one-loss side of the bracket.
For the complete draw and live scoring please CLICK HERE.
The first event of the 2018 World Pool Series, The Aramith 9-Ball Players Championship, is being held at Steinway
Billiards in Astoria, Queens, New York City from April 19th to 22nd, 2018. The World Pool Series is sponsored by Aramith, Rasson, Predator, Iwan Simonis, Tiger, and Kamui. Our suppliers and partners are Billiards Digest, CueScore, Let’s Go Print, On The Wire, Outsville, UpState Al, and the WPA.
For more information on the World Pool Series, please visit www.worldpoolseries.com.
Follow the World Pool Series on social media:
Facebook: https://www.facebook.com/worldpoolseries/.
Twitter: @WorldPoolSeries
Instagram: @WorldPoolSeries
To watch our PPV livestream, you can visit www.worldpoolseries.com and click the “Live Stream” button to go to our streaming page.