CueSports International, Henderson, NV (Dec. 13, 2017) — After settling for runner-up of the US Bar Table Championships’ 10-Ball Division for the past two years, Skyler Woodward, of Paducah, KY, earned the title of 10-Ball Champion Tuesday. 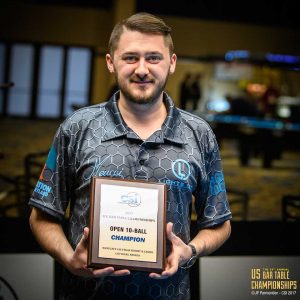 In the first set of the finals, Woodward jumped out to a 3-2 lead before a few errors put Van Boening in control of the set. Woodward miscued on an eight ball, allowing Van Boening to tie the score at 3-3. Then Van Boening broke and ran out to take the lead at 4-3. On Woodward’s next break, he scratched, allowing Van Boening back to the table where he ran another rack, and followed that up with another break and run, putting him on the hill. Woodward broke dry and Van Boening ran the rack to win the set and force a second set in the true double-elimination format.

Woodward and Van Boening traded games in the second set tied at 4-4. When Van Boening played a safe on a 3 ball. Woodward called the nine, which was hanging in the side pocket, kicked the 3 ball and the cue ball caromed off to make the shot and allow Woodward a run out to gain a 5-4 lead in the match. Woodward broke and had a tough layout, but after making two tough bank shots, he was able to run the rack, putting himself on the hill. In the final game, Van Boening broke dry and Woodward was able to run out to become the 10-Ball Champion. 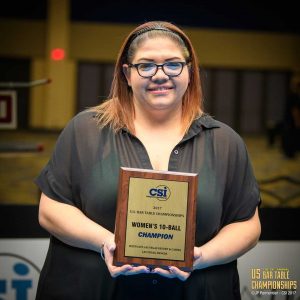 Live streaming of the US Bar Table Championships continues today at 1 p.m. PST. The schedule is as follows:

For streaming information, go to www.playcsipool/live-streaming.html

The 24th US Bar Table Championships kicked off Sunday at the Westgate Las Vegas Resort & Casino. The 9-Ball Division concludes Thursday, Dec. 14 and the 8-Ball is scheduled for Thursday through Saturday, Dec. 16.