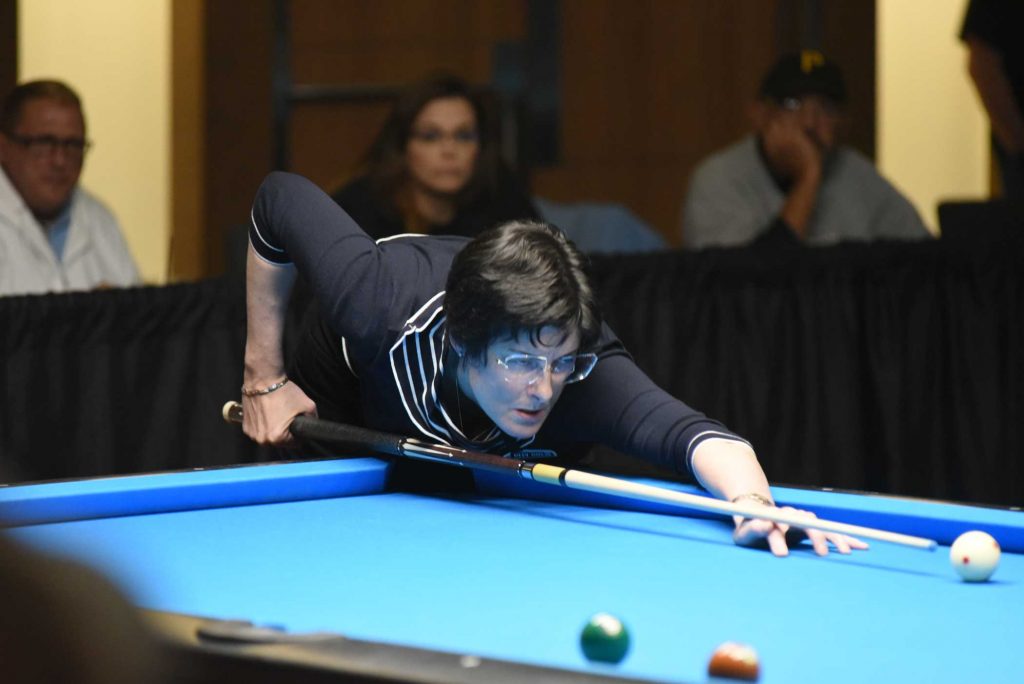 The 2017 Rivers Casino Open, held April 19th-23rd, proved very exciting for the spectators in attendance and those who tuned in via the WPBA live stream. With the click of a mouse, fans could tune in to live matches on any one of six tournament tables, which included live scoring updates.

The Charity Pro-Am kicked off Wednesday afternoon, with 8 teams, each team paired with a Pro. After three fast and furious rounds of play, it was determined that “Team Brittany Bryant” and “Team Monica Webb” scored the most game wins in each round, and would face each other in a head-to-head final. Team Webb overcame Team Bryant for the win, and a great time was had by all participants! There was also a “Challenge the Pro” session with all proceeds going to charity. Top ranked players took on all comers, offering their fans not only an opportunity to play their favorite pros, but a chance to autograph billiard memorabilia and snap photographs.

Thursday morning began the trek to Sunday’s semi-finals. Chen claimed the first semi spot with wins over Kristina Grim, 9-3, Naomi Williams, 9-0, Helena Thornfeldt, 9-3, and Line Kjorsvik, 9-4. The second semi spot was claimed by Karen Corr, with wins over Julie Kelly, 9-6, Jessica Barnes, 9-6, Janet Atwell, 9-6, Monica Webb, 9-7, and Brittany Bryant, 9-3. Challengers were grinding it out on the west side of the chart, hoping to make Sunday’s show. Brittany Bryant bested Kelly Cavanaugh, 9-4, Robin Parker, 9-1, and Jennifer Barretta, 9-7, before losing to Corr. Bryant went on to beat Julie Kelly, 9-6, for an opportunity to face Chen in the first semi-final. The 2017 WPBA Masters Champion and new number one ranked WPBA player, Line Kjorsvik, beat Suzanne Peters, 9-6, Teruko Cucculelli, 9-3, and Sandy Badger, 9-3, but fell to Chen. From the one-loss side, Line went on to eliminate Monica Webb, 9-6, earning herself a shot at Corr in the second semi-final. Chen overcame Bryant both sets, 4-1 and 4-2, to reach the finals. Corr experienced another sudden death match with Line, but this time, she prevailed. Corr won the first set 4-1, and Line answered back, taking the second set, 4-1. Corr responded, winning the sudden death game to face Chen in the finals. 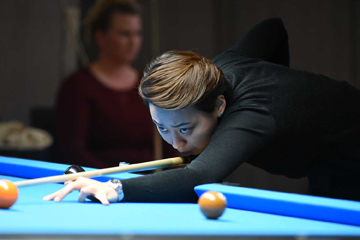 Siming played lights out all week, with a stable of opponents who could score no more than four games against her. In the first set, she cruised to a 4-0, but Karen fought back and won the second set, 4-3. Even on sets, players lagged for the break in the sudden death decider. Corr won the lag, broke, and made a ball on the break. Siming never made it back to the table. Corr made a nerve-racking out, flirting with the side pocket while playing position from the 6-ball to the 7-ball. The crowd watched and gasped in horror as the cue ball settled on the rail with perfect shape on the 7-ball. In true, champion form, Corr completed the run, earning herself a brand new title, 2017 Rivers Casino Open Champion!

The WPBA would like to thank its sponsors for this event, Rivers Casino and their staff who provided a fabulous venue and outstanding service, Diamond Pool Tables who provided the playing equipment and set-up for the event, Simonis Cloth who provided the cloth for the playing surface, and Aramith Pool Balls who supplied the brand new balls sets. Thanks go out to Dave Jacoby for building the WPBA 40th Anniversary Custom Cue for which raffles tickets were sold during the week, and given away on Sunday.