It’s Appleton vs. Corteza, Chua vs. Chinakov as the Molinari Players Championship heads to the final day. The Philippines Johann Chua has made an impressive American debut, defeating Jasyon Shaw and Chris Melling today to advance to the semi-finals.

(New York City)-As a regular at the top of the pool world, Darren Appleton has found himself in a more than a few tricky situations, funny positions on the table, and emotional roller coasters that are unique to pool at the professional level. But late Monday night in New York City, the multi-world champion simply could not stop shaking his head in disbelief at his latest position, which actually didn’t look too shabby indeed.

That’s because after two matches and a hard day’s slog on the table, the Englishman found himself in the semi-finals of the Molinari Players’ Championship, the very 8-ball tournament he conceived, and has spent the last few months promoting.

Sure the ultra-competitive Appleton wants to win, but deep down he found he really didn’t have a desire to take the crown, -after all the hospitable Englishman is the host here-and has actually been overheard saying just that at various times during the week at Steinway Billiards in Queens. But perhaps Appleton has just discovered an elusive key to sporting success; when you really don’t care either way, the lack of stress and pressure releases you to actually play your best. 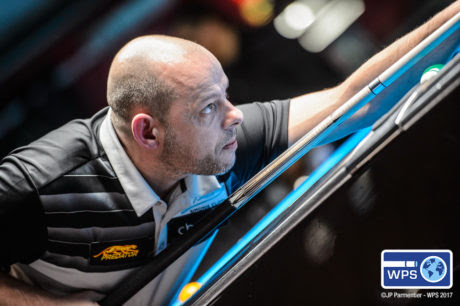 England’s Darren Appleton has been playing stress free on his way to a semi-final spot. And the two-time world champion certainly looked the goods in his two high profile matches today. In the round of 16 Appleton issued a beat down of Hall of Famer Earl Strickland, 15- 8. He then headed over to the TV table, where he put in a typical workman-like performance against the Philippines’ surging Dennis Orcollo, who had earlier stopped the charge of young American upstart Billy Thorpe. Appleton rebuffed the Filipino great at every turn and took the match 15-12, to enter Tuesday semi-finals.

Appleton would be well served to maintain his carefree attitude when he goes up against the Philippines’ Lee Vann Corteza, as the Filipino is playing superb 8-ball pool. Corteza took down two of the sport’s best today, first outlasting a typically stingy Mika Immonen in the final 16, 15-13, then holding off a furious late charge by Japan’s Naoyuki Oi in the quarterfinals to escape by the same score.

Against Oi, Corteza had cruised to a nearly insurmountable 14-8 lead. But breaking for the match and a spot in the semis, the Filipino came up dry. Oi proceeded to park Corteza in his chair for the next 30 minutes, closing the gap to 14-13. Corteza needed to stop the bleeding, and quickly. So he called a legal timeout and headed to the men’s room.

“I was up 14-8 and I was thinking I was going to win the match,” a smiling Corteza said afterward  “I broke hard in the next rack, but I didn’t get a ball down, then he runs five racks in a row. Then I took a time out. Then when we got back to the table, he broke and didn’t make a ball. Then I ran out. It was really good timing.” 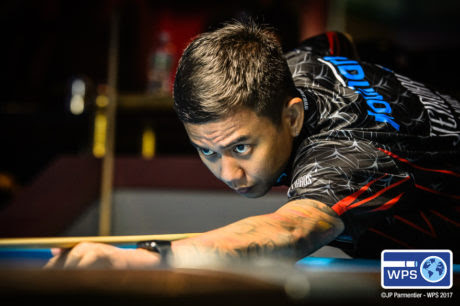 With his legendary English pool background combined with his incredible talent on the pool table, Appleton is a master of 8-ball strategy, and it might seem the Englishman has the advantage in their race to 15, winner breaks semi-final. But the super talented Filipino revealed a little known facet of his successful career that might change a few minds. Corteza has participated several times in the SEA games, an Olympic-style gathering of South East Asian nations held every two years. His regular discipline in the SEA Games? 8-ball. His results? 4 gold medals.

“Actually we play a lot of rotation pool in the Philippines and this much harder than 8-ball,” Corteza said. “After you play rotation, 8-ball seems easy. You just have to get a good break.”

While veterans Appleton and Corteza will do battle in the one semi-final, the other semi-final will feature two of pools sharpest young guns as the Philippines’ Johann Chua takes on Russia’s Ruslan Chinakov.

The 23 year old Chua has spent the last few years establishing himself, along with Carlo Biado, as the future of Philippine pool. Wildly talented, fearless, good looking and articulate, Chua brings the complete package to any event he enters. The Molinari Players Championship represents Chua’s first ever trip to the US. In just a few short days he has clearly wowed American pool fans. Especially in today’s first match.

Playing on the TV table in the round of 16, Chua found himself up against the current hottest player on the planet, Scotland’s Jayson Shaw. The hard charging Shaw looked like he would take the match as he raced out to an 11-6 lead. But the Scotsman would come to rue one simple miss on a bank in the 18th rack. Chua, unfazed by the score line and his opponent, stood up and promptly put Shaw in his chair for the next 30 minutes, running five straight racks. Shaw got a few looks after that, but Chua slammed the door shut, taking 9 straight racks in all for an emphatic 15-11 win.

Chua looked to be on the ropes in his quarterfinal match against England’s Chris Melling, who had earlier beaten hall of famer Ralf Souquet. Melling held a 13-11 lead when he snookered himself and squandered the rack. In the next frame the pressure got Melling again when he missed an easy 8-ball.  The matched ended up tied at 14 and went down to the shootout, where each player was given 5 cracks at a spot shot on the 8-ball. Chua was down early, but held his nerve yet again and took the shootout to advance to the semis.

Chua’s semi-final opponent Chinakov, also 23 years old, logged in a terrific day of pool, first beating Greece’s Alexander Kazakis, 15-10. In the quarterfinal against England’s Karl Boyes, the Russian surged back from an 11-7 deficit to take 8 straight racks and an impressive 15-11 win. 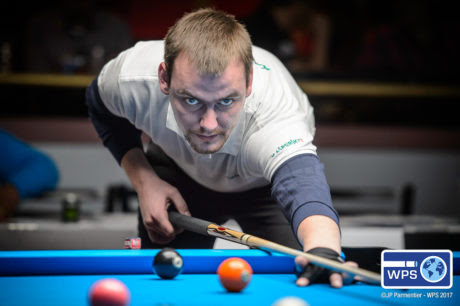 If Russia’s Ruslan Chinakov can steady his nerves, he just might find himself in the winner’s circle come Tuesday night in New York.

Chinakov, who was a prodigy player at 13 years old and won the World Jr. 9-ball Championship in when he was just 15 years old, admitted that, as he gets older, he often struggles with nerves.

“Against Karl we both made mistakes and he was leading 11-7. Then we took a break and I told myself stop being nervous, you have to relax if you want to win. Then after that, I was really lucky with the break and it started to work and I ran five racks in a row. I ran the last rack and, well, this is a great success to start the year.

“I have practiced a lot the last two years. And I’ve been hoping that one day it would pay off. The last few years I’ve had a lot of problems with my nerves. I get very nervous in important matches. When I was younger I didn’t get as nervous, but now that I’m older I seem to get very nervous and can’t control it. But now I see that everything is working much better.

“Tomorrow, i don’t know what’s going to happen, I might miss a hundred times in a race to 15. Every day is different. One day you can control your emotions and the next day you can’t.”

The semi-final between Chinakov and Chua begins at 11am EST, and will be winner breaks and race to 15.

The second semi-final between Appleton and Corteza begins at 3pm.

The final begins at 7:30pm and will be winner breaks and race to 16.

The winner of the Molinari Player’s Championship will receive $20,000.