I created this Pop Fly shot based on a concept I saw Dan Hosier do in one of his videos. I unveiled it at the 2016 World Trick Shot Championships in Quebec, Canada and I like to think it helped me win the Most Creative Shot award as voted on by the other players.

The goal of this shot is to pop object ball ‘B’ off of a cue, hop over a row of blocking balls and spin into the side pocket. The exact trajectory will be determined by a mix of the speed and spin of the cue ball.

First, lay a cue stick down the long centerline of the table and freeze the butt end to the foot cushion. Ball ‘B’ is frozen to the tip of the cue and also centered. Three balls form row ‘X’ anywhere from a couple cm to a chalk width away from ‘B’ ball. Don’t worry about row ‘Y’ to begin with.

The cue ball starts behind the headstring and I like to center this as well. The harder you hit it, the further to the left the object ball will jump. Obviously if you don’t hit hard enough, it won’t clear the blocker balls. The ‘B’ ball will also pick up some top spin from the prop cue. You can impart more though using varying amounts of draw. If you hit it softly to just clear the ‘X’ row, you won’t need too much spin to get the ball into the side pocket. If you hit it a little harder, ‘B’ ball could end up within a diamond of the rail and it will need a lot of spin to get to the side pocket. I like to use a ¾ ball aim, 1 tip of draw, and figure out my speed from there. I can usually add blocking balls ‘Y’ so the curve of the object ball is more obvious. It’s still possible to overspin the object ball and hit rail 2 though, so add draw in small amounts! 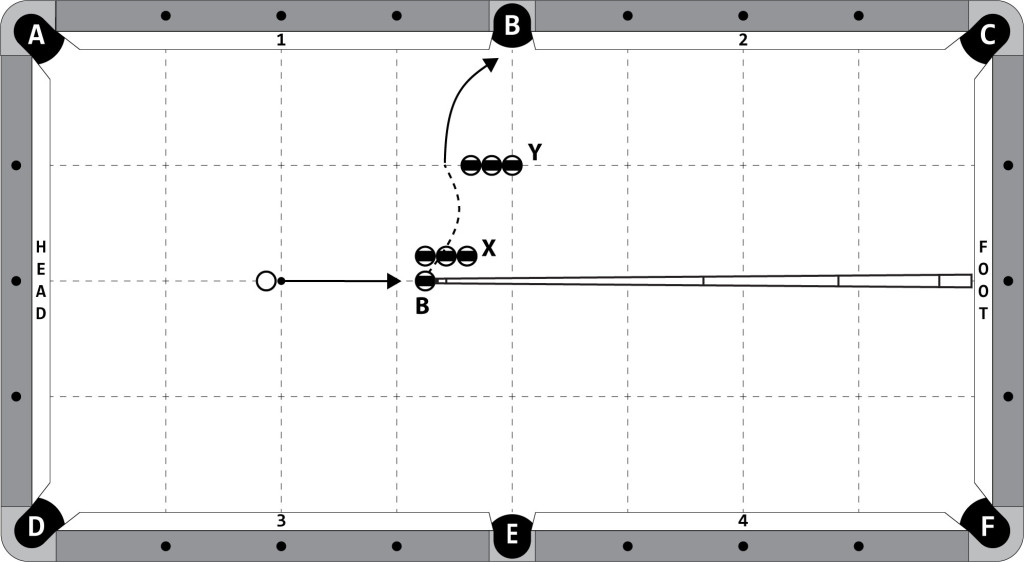