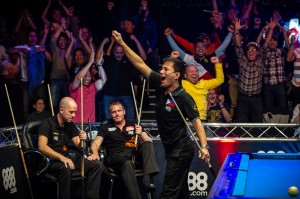 TEAM PHILIPPINES made up of Lee Vann Corteza and Dennis Orcollo became 888.com World Cup of Pool champions as they beat Holland in a thrilling conclusion after an action-packed final that illustrated the sheer excitement of top level pool.

The match ebbed and flowed and reached a climactic final stage that saw both teams buckle before the Filipinos redeemed themselves sinking the 8 and 9 for the title and $60,000 top prize. It was the third win for the Philippines in the eight year history of the event, following wins for Efren Reyes and Francisco Bustamante in 2006 and 2009.

This year they enjoyed wins over Croatia, Singapore, Hungary and Chinese Taipei en route to the final but the best was to come in the championship match.

Orcollo was delighted in victory, “The fans here were why we won. There was a lot of pressure and things became very difficult but the Filipino community in London who supported us throughout really helped us through.

“I reached the final of the World Cup in Manila in 2010 but we came up short so it is fantastic to win here in London. I would love it for me and Lee Vann to defend the World Cup in the Philippines next year as it would be a dream come true to win it again in our home country,” he added.

Corteza continued, “You have to thank those Philippines supporters who helped us through. Representing my country is such a big honour for me and I’m very thankful and proud to have won the World Cup of Pool for the Philippines.”

With the match moving up to a race to ten racks, the Filipinos moved into a 2-0 lead, but neither team could break away as the score went 3-3.  Quite quickly though, the Philippines won the next two and at 6-3 the Dutch were definitely on the rails.

In the winner breaks format though, they came back, cashing in on a mistake from their opponents and before long it was 7-7 and effectively a race to three. The Dutch took the next and looked set to move to the hill but Van den Berg made it tougher than it needed to be, going from the 7 to 8 and Feijen missed a pressure pot that probably should have gone in.

Instead of 9-7 it was 8-8 and the tension was palpable. A great break eased the nerves for the Filipinos and they ran out to reach the hill against the odds.

Orcollo was breaking for the match but nothing went down. Feijen shot the 1 ball home and with an open layout, it looked as though it was going to a decider. Van den Berg though twitched on the pink 4 to seemingly gift the rack and the match but some poor positional play from both Filipinos made every shot a heart-stopper. The big one was the long 8 ball and somehow Corteza managed to make it and when his partner downed the final 9 it sealed a superb win.

Van den Berg was willing to take the positives from the week; “We have never reached further than a quarter-final at the World Cup. There are some very difficult opponents in the tournament and we played really good pool all week. It is too bad we didn’t snap it up but if I can sign for second place every time we play I will do it”

Feijen added, “We showed a lot of heart as we were down 7-3 and missed some difficult shots. At 8-7 I missed the 8 ball and unfortunately in the last game it was the 4 ball but you win together and lose together. It was pretty close but they’re great players and play great as a team.”

The 2013 888.com World Cup of Pool runs from Tuesday September 17 to Sunday, September 22 at the famous York Hall in Bethnal Green, East London. The field features 32 teams from 31 countries in a single elimination format. The total prize fund is US$250,000 with $60,000 going to the eventual champions. 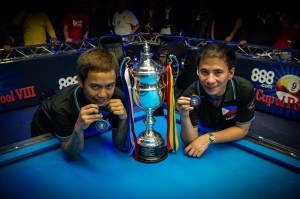 The 2013 World Cup of Pool runs from 17 – 22 September and takes place at the York Hall, London. For those wanting to watch the action in person, all tickets are available from www.seetickets.com (Search ‘World Cup of Pool’)

Notes: Matchroom Sport are one of the world’s leading producers of televised sport and are responsible for over 1,000 hours of original programming across a range of sports. Based in the UK and chaired by charismatic founder Barry Hearn, World Cup of Pool is one of a stable of pool events that include the World Pool Masters and the Mosconi Cup.