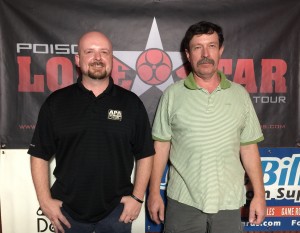 In the amateur 9-ball division, Brazoria, Texas, APA franchise owner Johnny Griffin came out firing with wins over Bodie Scott, Chris Young, Jack Cavalier, and Tony Benestante, 7-3. Also on his way to the final four winners’ side, local Filipino player, Rudy Pascal, took down Chris Lord, Josh White, Rafael Garcia, and Brock Temel, 7-1. Sonny Bosshamer made quick work of Steve Williams, 7-4, Bob DeTuncq, 7-3, and Victor Belmares, 7-5, while Marvin Diaz ousted David Chow, 7-4, Teddy Hernandez, 7-4, and Gerardo Alvarez, 7-3. On the one loss side, after losing his first match to Williams, 7-3, John McDowell won four consecutive matches, eliminating Young, Hernandez, Tony Scott, and Alberto DeLeon. Pete Charles was also on the come-back trail, ousting Will Felder and Chris Rogers, while John Murphy took down Rafael Garcia and Chuck Adams, only to succumb to J.C. Torres, 5-3. Cavalier made a run for the money, taking down Jacob Watson, 5-3, and Pablo Trinidad, 5-4. McDowell went on to eliminate Temel and Charles by the same score, 5-4, while Charles ended Benestante. It was Torres over Alvarez, 5-3, and Belmares over Cavalier, 5-4. As the one-loss side, final four took shape, on the east side, Bosshamer bested Diaz, 7-5, and Griffin dusted off Pascal, 7-2. For his seventh, consecutive victory on the one-loss side, McDowell bested Diaz, 5-3, while Torres upset Pascal, 5-1. The hot seat witnessed Griffin edge-out Bosshamer, 7-6, while McDowell logged his eighth, consecutive match win against Torres, 5-4. McDowell overcame Bosshamer, 5-2, for a record-breaking 9 consecutive match wins, to meet Griffin in the final. Griffin stopped McDowell just short of the goal line, ending his run in the first and final match, 7-4. Congratulations to Johnny Griffin on capturing his first-ever, Poison Lone Star Tour event! 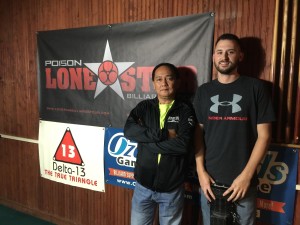 In the open 9-ball division, world renowned Filipino player, Ed Acaba made his way through the winners’ side defeating Will Felder, 9-8, Doug Young, 9-1, and Amar Kang, 9-6, while Denis Strickland bested Sonny Bosshamer, Jack Cavalier, and Brock Temel, 9-7. Ernesto Bayaua, determined to win his third event of the year, took out Pete Charles, 9-4, Bodie Scott, 9-1, Jacob Watson, 9-7, and Aldo Rosso, 9-3, while Danny Lee overcame Josh White, Chuck Adams, 9-1, and Blaine Barcus, 9-8. On the one-loss side, Young bested Barcus, and Kang eliminated Johnny Griffin, 9-4. Barcus went on to defeat Strickland, 7-6, while Lee upset Kang, 7-5. Back on the east side, hot seat action witnessed Acaba and Bayau, battling it out to the bitter end. An impeccable safety on the one ball, by Acaba, resulted in ball-in-hand, and the demise of Bayaua, 9-8. On the on-loss side, Barcus demolished Lee, 7-1, and followed up with Bayaua, 7-2. After 5 consecutive match wins, Barcus had earned himself a shot at the title. Acaba and Barcus teed off in the finals. The first set was tight and grueling, and play was nearly flawless. Towards the end, Barcus pulled ahead to win, 9-6. In overtime, although Barcus was the first to reach the hill, Acaba emerged victorious, 7-6. Congratulations to Ed Acaba on capturing his first-ever, Poison Lone Star Tour event!

The Poison Lone Star Billiards Tour would like to thank, and welcome all the new players who attended this event. The next PLST stop will be the finale event, on October 8th-9th, 2016, held at Bogies Billiards and Sports Bar, located at 3040 FM 1960 E., Ste. 101, Houston, Texas 77073. The Poison Lone Star Tour encourages everyone who loves to play pool and compete in a friendly atmosphere, to attend an event. For more information, visit LoneStarBilliardsTour.com. “Like” us on Facebook @LoneStarTour and “Follow” us on Twitter @LoneStarTour09.