Therese in a hard final again best in the world 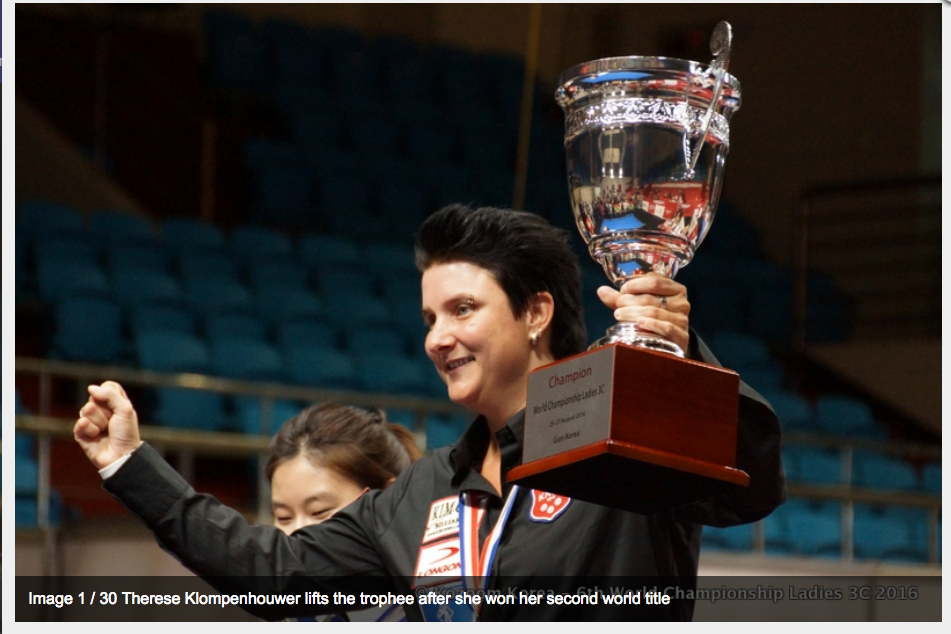 GURI – The Dutch flag was raised for 33-year old Therese Klompenhouwer, who won her second world title in 3-cushion this Saturday in Guri (Korea). The reigning champion played an exciting final against Korean Mee Rae Lee, ten years younger than the Dutch woman. The match lacked some quality but made up for it in tension, all the way to a draw at the end. The shootout gave Klompenhouwer the most coveted title in ladies billiards. It was the second world title for the Dutch, who also holds six European titles and a series of Dutch ones. She has been the international leader of women’s 3-cushion for the past five years.. When she won her first world title in Turkey two years ago, she ended the long reign of Japanese Orie Hida, who won the title three times.

Therese Klompenhouwer played a superior tournament in Guri, the only participant of the sixteen who could consistently win her matches and average over 1.000. She was the only European in the final eight, with one American and six Asian players. ,,There is no growth or development in Europe, and the Japanese and Korean players get stronger every year”, said Klompenhouwer, who jumped for joy after his victory. ,,I was so happy, because in the final I had played beneath my level. I was tired, my arm was heavy, I had no stroke and I felt the tension towards the end.”

The young Korean Mee Rae Lee first trailed 15-8 in the final, but she found a way back into the match, helped by six consecutive open innings from Klompenhouwer. ,,It was my fought, that she could make a comeback”, confessed Klompenhouwer. ,,I was lucky in the end, that she missed in the shootout.” The Dutch started the extension to the match, made two points and missed the third one due to a butage. ,,I have rarely walked to my seat with so much tension in me, because it is a world title you are playing for. It was mine, and I wanted to hold on to it.”

Mee Rae Lee (21), a new star for the future, felt the tension even more. A shock went through the Korean audience, that had greeted her every point with applause, when she missed the break shot in the shootout. She later commented: ,,I had the world title at arm’s reach, and when I realized that, the tension got the better of me.” Therese Klompenhouwer jumped out of her chair and shared the joy with her opponent. Then she made a bow of respect to her opponent. ,,She will become a great player. She already has this beautiful technique, and her fighting spirit is remarkable for a girl her age. I already admire her”, said the champion.

On the final day of the WC, Therese Klompenhouwer first beat Orie Hida in the semifinal: 30-23 in 19 innings. It was her third victory in a row over the Japanese threefold world champion. Mee Rae Lee booked her place in the final with a victory over Yuko Nishimoto, 30-19 in 28 innings. The final days of the tournament were dominated by the Asian players, six from Korea and Japan survived the group stage and played the quarterfinals. American Ester Park was the surprise in the last eight, Therese Klompenhouwer was the only European.