Karen Corr Turns Heads Again as She Enters and Wins Yet Another JPNEWT Tour Stop!

Once again, heads turned as Karen Corr showed up for the fourth tour stop of the J.Pechauer NorthEast Women’s Tour (JPNEWT). Triple Nines was the setting with the owner, Stan, allowing the ladies to virtually take over his room for more than twelve hours on Saturday, June 11th, and most of the day Sunday, June 12th. Twenty three players entered to test their skills, in the $1,000 added event ($500 from Coins of the Realm, and $500 from Triple Nines).

It was luck of the draw that newcomer Dina DiGregorio, playing only her second event, was paired up against Karen Corr for their first match. Losing to Corr, Dina took it in stride, and eked out a hill/hill victory over her next opponent, Kathy Friend, on the B-side, only to lose to Teri Thomas, after a long and arduous safety battle.

“‹Karen blasted through the field, and gave up only five racks in her first three matches–Dina (7-0), Judie Wilson (7-2), and Sueyen Rhee (7-3); until she was paired up with tour director Linda Shea, who managed five racks of her own, before she too was sent to the B-side.

“‹On the other half of the A bracket, Kia Sidbury was soundly defeating all comers, including Gina Hartman (7-3), Brit Rapp (7-2), and Nicole Fleming (7-4), when she got stalled in a hill/hill match with Sharon O’Hanlon. Kia squeaked out a win against Sharon, to face Karen on Sunday, where she scored one game, before Karen took the hot seat.

Meanwhile, Sueyen Rhee, having been defeated by Karen in the third round, narrowly defeated Heather Platter in a hill/hill match, and continued her climb back in the next four matches, with wins against Melissa Jenkins (7-2), Sharon O’Hanlon (7-2), Linda Shea (7-4), and Kia Sidbury (7-4), to face Karen Corr in the finals.

“‹Linda Shea got three respectable wins, and Sharon O’Hanlon racked up two wins, before facing Sueyen Rhee on the B-side. Sharon succumbed to Sueyen first (7-2), and neither Linda, nor Kia Sidbury, were able to shake Sueyen out of her bid to face Karen again, both scoring four games each against her.

“‹Not unsuprisingly, Karen dominated with a 7-3 victory over Sueyen, going undefeated again. As many of the ladies of JPNEWT will tell you, you always learn from playing Karen Corr, and all are hoping to learn enough to beat her.

“‹Thanks to Stan Nasiatka and Triple Nines Bar & Billiards for hosting this event! Thanks to all of our tour sponsors: J.Pechauer Custom Cues, Coins of the Realm, Britanya Rapp, and Ozone Billiards! Thanks to our qualifier spot sponsors: Markley Billiards, Baltimore City Cues, and Sueyen Rhee & Associates Real Estate, and cue ball sponsor Pauline Mattes! 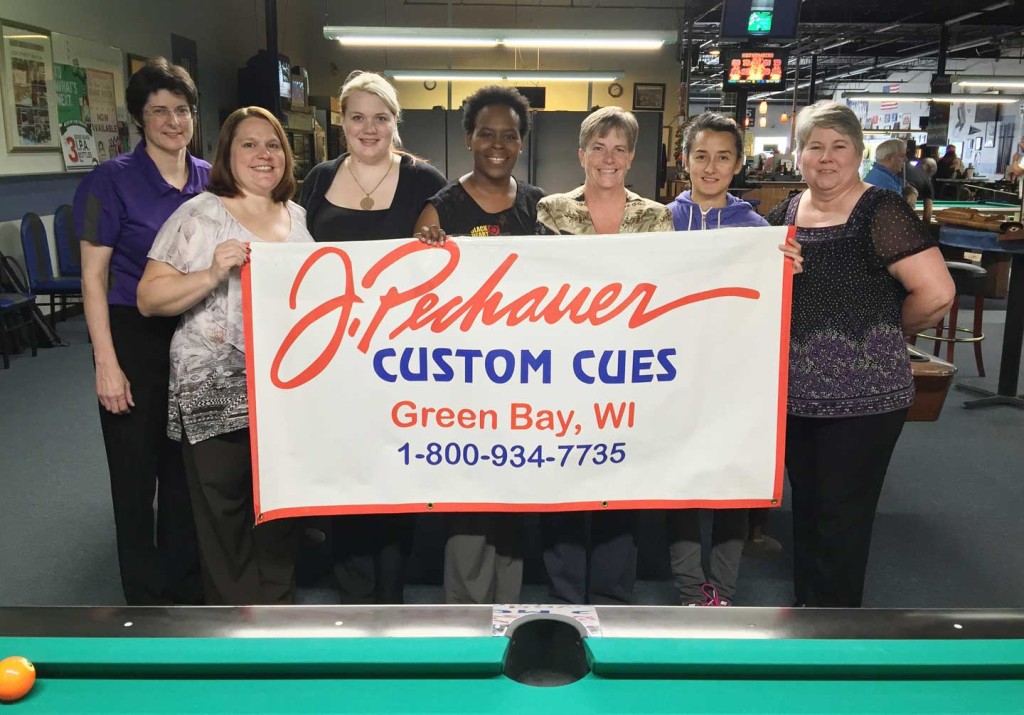