Europe increases lead but America still in the race

THERE WAS more drama at the 22nd annual PartyPoker Mosconi Cup at the Tropicana as the Europeans increased their lead as they won the session 3-2 to move their overall lead to 6-4 with two more days to play. It could have been so much worse for the USA but they won a thrilling hill hill final match when a defeat would have left them three points adrift and the Europeans needing just four more wins to retain the trophy.

The venue was once again packed to the rafters and the US duo of Skyler Woodward and Justin Bergman got off to the perfect start with 5-3 over Holland’s Niels Feijen and Nick van den Berg. Coming into the session at 2-3 down, it was essential to start out with a win.

“I had a lot of confidence in us because we have played probably five big money matches together as doubles and we haven’t lost yet,” said Justin Bergman.

“I wasn’t planning on losing but we knew they were a great team and we would have to play good. Shane was coming down and pumping us up, being really positive.”

Woodward added, “I shoot my shots and he shoots his, we just focus on pocketing the balls. I felt no pressure. I am one person and I have four great players behind me. I do what I can do and the four great people behind me are going to back me up no matter what.”

That parity didn’t last long though as Albin Ouschan, making his Mosconi Cup singles got the better of Mike Dechaine. It got to 3-3 but the Austrian edged it in what was a scrappy encounter. Dechaine had a great chance to go 4-4 but missed the 8 ball up the rail and although it left between the 9 ball between the white and the 8 ball, Ouschan jumped perfectly to pot the 8 ball and seal the match.

The lead became two in the next as Karl Boyes and Darren Appleton won another gritty match, beating Shane Van Boening and an out-of-sorts Corey Deuel. The English pair led 3-0 and it was a lead the Americans could not recover.

With the score 5-3 in the European’s favour it fell to young Skyler Woodward to stop the rot but he was taken down by Karl Boyes in an entertaining match up that saw the match referee Ken Shuman mired in controversy.

Initially he called for a re-lag and then later in the match called a foul on Karl Boyes for measuring with the cue ball. Boyes insisted he was just trying place the cue ball in the narrow space available between the 2 and 3 balls. Shuman reversed his initial decision but the match then seemed to take an eternity to resume as the referee explained his decision to both captains, before Boyes seemed reluctant to continue. The crowd became increasingly impatient before things eventually resumed.

Both players weren’t at their best but the pressure was immense and in the end it was Boyes who had enough to secure the point.

Commented Boyes, “We lost the first point of the day and then Albin won, which was a very good win for him because it is his first time playing singles, which is when you really feel the heat. His win was good for Darren and I as we went on and there was a little bit of pressure taken of us, and when we got the win it took a little bit of pressure off me going out against Skyler.

“The singles game was crazy. It was hostile in there, the atmosphere was brutal but I managed to get the win.

“Ken has made a decision where I am trying to put the cue ball between the balls so that I can pocket the two in the only pocket it goes in, it was obvious what I was trying to do. But when he said foul I thought I must have touched a ball.

“I asked him and he said no, I was marking and I didn’t understand what he was on about. The crowd started going crazy saying he called foul so it should stand so I said, whatever. But he said he was the referee and he can change his mind. After that everybody was against me, which I sort of like and I managed to come through.”

The last match was a must-win for the USA and so it proved as Shane Van Boening and Mike Dechaine won a thrilling hill-hill match against Darren Appleton and Nick van den Berg. It was nip and tuck all the way and Europe reached the hill first at 4-3. Some great shot making from Dechaine ensured the match went to a decider.

Europe broke off and despite getting a ball down, they elected to push out. After some discussion, the Americans gave it back to them. The side of the two ball was visible and van den Berg moved it slightly and sent the cue ball up table.

There was a difficult 2/9 carom on show and Van Boening delivered an explosive shot which clipped the 2 ball and crashed in the 9 as it flew into the corner pocket. It sparked scenes of bedlam as the Americans reduced arrears and ended the day on a high.

“Me and Mike discussed the shot and I figured that we needed to go for it because the rolls weren’t going our way in the match so we figured we should take a fire shot at it, and it came out great,” said Shane.

“I was feeling good today. I was working on my stroke last night and I have everything figured out. We need to avoid a couple of mistakes that we had in the beginning and if we focus on potting the balls better we can have a better outcome tomorrow.”

Dechaine added, “That point means everything, it is a little momentum swing. If we had have lost that match I don’t know how we would have handled it as a team but I know everybody right now is excited and we are looking forward to tomorrow.”

American skipper Mark Wilson summed up the day from the USA’s perspective; “Magnificent end to the day. Shane hadn’t had much good fortune so far so to make one big shot like that and give us that burst of momentum and maybe surge us forward is huge.

“When you go down 7-3 spirits go down but when you make a shot down that it is almost like we are back to even. We have not played our best pool so far throughout.

“We know how we will line-up tomorrow, we had a plan from day one based on what we think will give us the best chance to win.

“To the European’s credit, they have played tremendous pool. They have had very few unforced errors and we have made more than they have. Maybe on the tactical exchanges we might have come out a little bit ahead but on the couple of times they have missed a ball we didn’t really get the opportunity we needed.

“They have great players and you saw today Albin Ouschan made a tremendous run out and Karl made a huge run out from a super-tough layout. They are playing well and we will have to see what tomorrow brings but I know we are going to be on a big high now.” 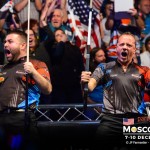 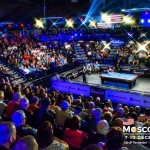 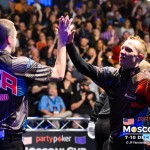 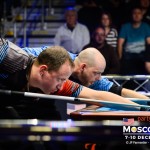 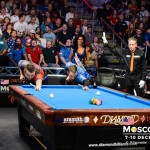 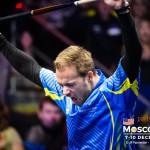 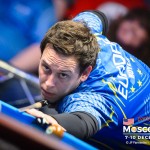 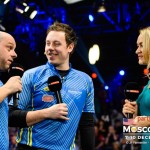