LUXOR – The flying Dutchman Dick Jaspers is back on top of the world. With his fabulous victory in the Luxor World Cup, in which he outclassed the young Korean HaengJik Kim in the final match 40-14 in eight innings (5.000 average), Jaspers showed that the short slump in his career is definitely finished. The victory on the banks of the Nile was good for a 5.500 euros main prize, the leading position in the 2015 World Cup cycle and a sensational come-back in the top three of the world rankings.

The display of high class power in the final of the first World Cup this year, delivered him a tournament victory, although the Dutchman was not too strong in his first match, but then defeated all his opponents by a huge margin and in a superior style. Murat Naci Coklu (40-14 in 18), Hyung Bum Hwang (40-19 in 24), Dani SÃ¡nchez (40-21 in 14) and HaengJik Kim (40-14 in 8) all had to deal with Dick Jaspers’ mastery.

It was for the Dutchman, who turns fifty later this year, his 21th victory in a World Cup, his first in twelve years of World Cup tournaments in Egypt and the fifth time he played five average or more in an official match. Only at the European championships in Florange in 2008 (5.625), Jaspers did even better in a match that was played in sets.

The reaction of the winner, who widely swayed his cue and showed his emotions for minutes to the crowd at the Sonesta St. George hotel: ,,I haven’t won so much for two years, but after the World Cup in Porto and the success here in Luxor, I’m really back. Back on top of the world. That’s very important: I’m a professional player, I live intensively for my sport and I want to win big tournaments.”

On the final day, Jaspers grew to his very best when he first knocked down Dani Sanchez 40-21 in 14 innings (runs of 8 and 12) and then faced the sensation of the tournament in the final: the Korean, new star player HaengJik Kim. The Asian and quadruple junior world champion snatched the win in the semi-finals against his idol TorbjÃ¶rn Blomdahl in a match that neither showed to much tension. HaengJik quickly ran to a 20-7 lead after a run of nine, built up to 34-21 to finish coolly at 40-24 in 22 innings.

The World Cup victory comes for Dick Jaspers on a perfect moment regarding his future. ,,I mainly attach great importance to individual performance and as a professional, it is very important to play in all kinds of competitions in strange countries. This victory puts me back in the spotlight”, he beamed after the best match ever in a World Cup final.

In his review to the tournament, he pointed the stunning performance of his young Korean opponent in the final. ,,He is a player who certainly will grow to the world in the coming years. I have a great respect for him, for his huge talent. He’s a player with great abilities, ready to join the world top.”

The main surprises in this World Cup were the early elimination of FrÃ©dÃ©ric Caudron by the Korean Hyung Bum Hwang, Eddy Merckx by a miraculous final run of LÃ¼tfi Cenet and Sung-Won Choi in a poor bump with HaengJik Kim.

Dani SÃ¡nchez won one of the most spectacular matches of the tournament against Tayfun Tasdemir in which both players battled it out, long between 2.500 and 3.000 average and the Spaniard eventually took the highroad as he did against Filippos Kasidokostas and LÃ¼tfi Cenet before. The Spaniard finally was outplayed by Jaspers in the semi-final.

Sung-Won Choi remains the leader of the world ranking, where TorbjÃ¶rn Blomdahl climb to second place and Jaspers to third place, passing Eddy Merckx and FrÃ©dÃ©ric Caudron for the top spots. HaengJik Kim would have been in the top twelve if he had won the tournament, now he’s number fourteen.

The final score in Luxor: 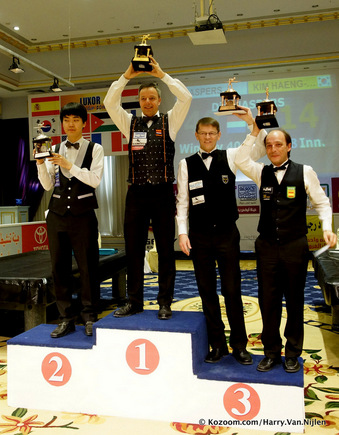