Jennifer Barretta Suits Up for USA: 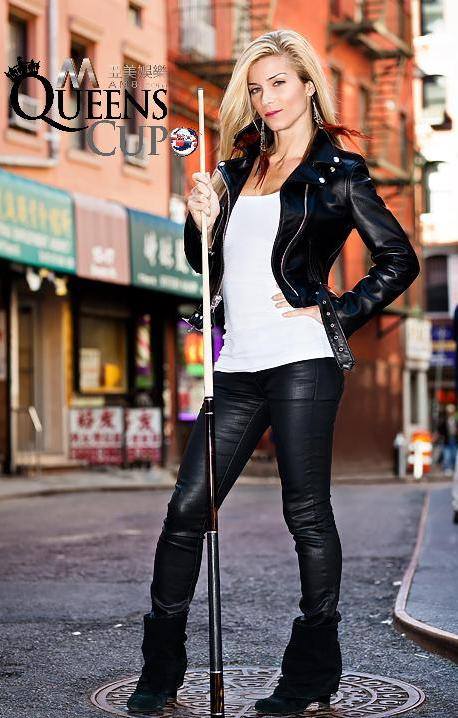 Manila, Philippines-  Here she comes. NYC’s all-American girl Jennifer “9mm” Barretta has been selected to represent USA on Team West against Asia in the äºšç¾Žå¨±ä¹ AM8.com Queens Cup ! Barretta is currently ranked in the WPBA elite Top 10 for the past 4 years and has been itching to suit up for America! The greatest rivalry in women’s billiards is about to ignite. On April 16-18th, 2015 the second installment of the äºšç¾Žå¨±ä¹ AM8.com Queens Cup will feature champions vs champions as the best women from Asia will take on the best in the West! Last year, Team Asia had a dominating performance over Team West during the 3 days of competition. This year the quad squad from USA & Europe will be looking to even the score. The äºšç¾Žå¨±ä¹ AM8.com Queens Cup will be hosted by the award winning Resorts World Manila Casino & Hotel and sponsored by Andy Cloth and Viking Cue. The Queens Cup is a Dragon Promotions production. 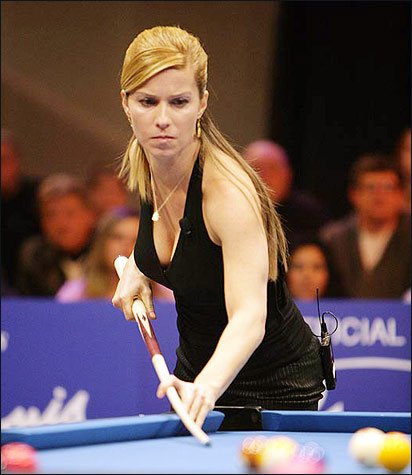 “I’ve played her a whole bunch of times and I can tell you Jennifer has got a lot of fight in her. First, her mechanics are really strong, and you can tell right away that’s not an accident. She’s a dedicated practice machine. Plus she has a really good mental game. That makes her a natural pick to represent the USA in the Queens Cup. And she always carries herself well on and off the table. As my pool buddy would say, ‘Win or lose, she’s always a perfect gentleman’ “, said top ranked American pro Jeremy Sossei, a top contender himself to make team USA for the men’s Mosconi Cup.

Barretta is known for her intensity during competition and her disciplined training routines in between competitions.

“I’m very excited that I will have the opportunity to play in the äºšç¾Žå¨±ä¹ AM8.com Queens Cup. It’s always a great honor to be chosen to represent your country, but getting to experience that honor in front of the best pool fans in the world makes it even more special”, said Barretta on being selected to play for USA on Team West, and playing in front of the pool crazed fans of the Philippines.

The Queens Cup will showcase the rivalry between the Asians and their western counterparts in Europe and USA, very similar to the Ryder Cup in golf or Davis Cup in tennis. Elite professional ladies from their respective countries and continents are selected onto two sides representing the East and West. The event will last 3 days in a 10-Ball format that will conclude when one team reaches 10 match wins. Style of play will include singles, doubles, triples, and 4-on-4. Captains will be put to the test to create the best strategy in partnerships and chemistry of match-ups. If the matches go 9 to 9 hill-hill, a final 4-on-4 play will set the scene for the dramatic conclusion.

Barretta is not a complete stranger to team competition format. She played for the USA in the World Mixed Doubles in China, and had a winning record in the USA vs Korea 2 day dual tournament where she was a key member in USA’s victory over Korea’s team of Ga Young Kim, Jeanette Lee, Charlie Williams, and Min Hu Baek.

“Jennifer is what I call a hard nosed player. She’s ultra competitive. When the first Queens Cup was announced, she called me and told me she wanted in. That team was already set but got slaughtered by Asia. And so, well, it took a little longer but now she gets her shot”,  explained Charlie Williams, Executive Producer of the äºšç¾Žå¨±ä¹ AM8.com Queens Cup. “Selecting the players for the team is a daunting task when going against a powerhouse like Asia. It requires things that are more than meets the eye. There’s going to be a ton of pressure that many of these players have never experienced before, and it’s also going to require a player to give 110% of their all. And Jennifer Barretta is all of those things.”

A late starter in billiards, Barretta quickly climbed the amateur ranks to first become the “Player of the Year” on the Chesapeake Area Tour for women, which earned her spots into all of the professional events on the pro tour. By the end of the pro tour season, Jennifer evolved from amateur to professional when she accumulated enough points to achieve the prestigious “Touring Pro” status with the Women’s Professional Billiards Association. By the next season Jennifer proved she was more than just a pretty face when she defeated the #1 ranked player during the quarter-finals of an ESPN televised match, ultimately finishing the pro event in 3rd place. A year after that she captured her first international title by winning the Empress Cup in Korea defeating Yu Ram Cha, Jeanette Lee, and Ga Young Kim in front of their home crowd to record breaking television audiences. Since then, Barretta has been a staple top 3 ranked American player for several years now and is the second highest ranked American in the world rankings.

Jennifer has had a multitude of careers involving the pressures of being in the limelight. From professional fitness competitions, modeling, and pro billiards.

Besides becoming a top player, Jennifer Barretta has also transformed into a popular figure and ambassador of the game and able to promote it to the masses. Utilizing her movie star looks, fitness, and professionalism, she has appeared in numerous mainstream media including FHM Magazine and will be one of the stars in an upcoming reality TV show airing on TruTv this summer.

The äºšç¾Žå¨±ä¹ AM8.com Queens Cup will be broadcasted worldwide to very receptive audiences who loved the last one. This year predicts for an even bigger viewership for this highly entertaining and competitive event. Yahoo Sports writer Bob Guerrero described the event in his article “Queens Cup is a breath of fresh air for pool” .

The AM8.com Queens Cup brings a level of excitement and pressure never before seen in women’s billiards. On April 16th, The Empresses of Pool Battle for Glory.