(General Santos City, Philippines)–From the late 1990’s to the late 2000’s, the name ‘Marcus Chamat’ regularly featured on pool leader boards, especially the biggest events in the sport. The affable Swede  twice reached the semi-finals of the World 9-ball Championship, and finished in the top ten six other times. 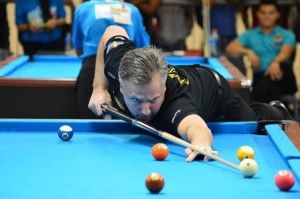 The last few years, however, saw the man known affectionately as “Napoleon” stay closer to his home of Gavle, Sweden. As a single father to a young boy and a pool club to administer, the calling of the brutally tough international pool circuit had to take a back seat.

But on Thursday night in General Santos City in the southern Philippines, the 39 year old Swede turned back the clock with one of the finest performances of his career. Matching up against world number 1 Chang Yu Lung in the single elimination round of 64 at the 2015 World 10-ball Championship, Chamat played flawlessly, running the Taiwanese great out of the SM mall with a resounding 11-5 win. The victory means Chamat will come back to play on Friday in the round of 32. And he knows as well as anyone that he has the tools to make a serious run.

“That was my best match of the tournament, one of the best matches I played in a long time,” a delighted Chamat said after leaving the table. “He’s the number 1 player in the world. Everything was laid out right. My safeties were awesome. I have to take it just one match at a time. Obviously I have the game or I wouldn’t be here. If I can come with game like that against a player like that, I can beat anyone.”

With the slog of the group stages giving way to the money rounds, it’s that time in a big event when the streaking players will begin to reveal themselves. Often times in world championships, players who go on to win it have to suffer a major scare before they catch a gear and streak towards the winner circle.

With that intangible in mind, fans shouldn’t be surprised to see Taiwan’s Ko Pin Yi hovering close to glory after Friday’s three sessions conclude. The 25 year old had one of those epic days today that just screamed “destiny.” Ko first matched up in sensational do-or-die battle  in the group stage against Hall of Famer Mika Immonen. With a free pass to the exits hanging on every ball, the stars battled toe to toe right to the bitter end. Ko held his nerve and won at the wire, 9-8. 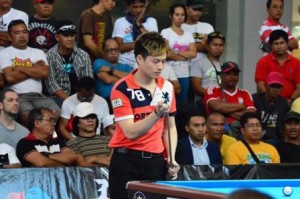 The round of 64 began soon after and Ko got the call to go up against talented Greek, Alexander Kazakis.  After the pair slugged it out for two hours, and leaving a one rack decider, Kazakis appeared headed for victory with just four balls left on the table. The Greek, however, blew position on the seven and after a miss, Ko stepped in and held his nerve yet again to claim a well-deserved spot in the final 32.

As usual Taiwan is making its mark in a world championship. In all, ten Taiwanese players made it to the round of 64, with six, including Ko’s 19 year old brother Ping Chung, already through to the round of 32. Two more Taiwan players will compete on Friday morning.

The Philippines started the tournament with a whopping 43 players out of the 128 man field so it’s not surprising that Filipinos made up the bulk of those who qualified, 27 out of 64 players, in fact. What was surprising was the early exit of two of the country’s biggest names. World number 7 Dennis Orcollo ran out of luck against Indonesia’s tough Irsa Nasution, falling 11-8. Hall of Famer Francisco Bustamante dueled with Spanish veteran David Alcaide, losing at the wire, 11-9.

Much of the spotlight for the Philippines now turns to the heaps of relatively unknown young talents waiting for their turn to grab some world pool glory. Raymund Faraon, Baseth Mapandi, Jundel Mazon, Ruben Cuna, Jonas Magpantay , and Johann Chua, who defeated a stingy Ralf Souquet, all fought their way in the final 32. 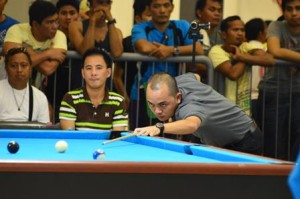 One Filipino veteran local fans should keep a sharp eye out for is Warren Kiamco. Kiamco has been on the scene for over 25 years and has carved out a great reputation, especially in the United States. He recently captured the Derby City 9-ball in Louisville, Kentucky and is in excellent form in Gen San. Kiamco seems primed to finally grab the ultimate prize that has eluded him all these years.  But the veteran knows he can’t get ahead of himself.

“I’m in good shape right now,” the 44 year old Kiamco said after moving into the round of 32 with a convincing win over Poland’s Karol Skowerski. “But there’s always pressure, even if you won your last tournament. The pressure is the same if you play in the Philippines or in another country. It all depends on how you feel. I definitely have a chance but I can’t think about that now. I have to take it one match at a time.”

Friday will be a very busy day at the SM Mall as the field will be reduced all the way down to the Final 4 by the conclusion of play. That means players will have to play at least three grueling race to 11 matches, with some even having to play four. That’s the kind of hard core effort that might even wear down a warrior like Manny Pacquiao.

The semi-finals and final will take place on Saturday.

**The 2015 MP Cup World 10-ball Championship takes place at the SM Mall in General Santos City, Philippines   from February 15-21 and is sanctioned by the World Pool & Billiard Association(WPA), the world governing body of pool.

RESULTS GROUP STAGE MATCHES FROM THE LOSERS SIDE