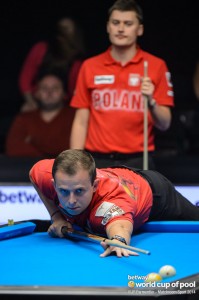 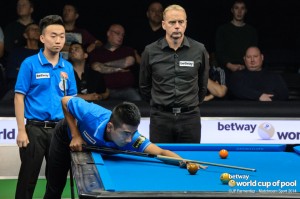 QATAR upset the applecart at the 2014 Betway World Cup of Pool as they turned over the highly fancied Chinese Taipei pairing of Chang Yu-lung & Hsu Kai-lun to take their nation through to the second round for the first time in the events nine year history.

Taking place at the Mountbatten Centre in Portsmouth, the Betway World Cup of Pool features 32 two-man teams from around the world vying for a $250,000 prize fund, and it was Qatar who still has their eyes on the prize following an exciting 7-5 win.

The Middle Eastern country had played in the event from its inception in 2006 until 2010, having failed to win a game but pool in Qatar has made significant progress in recent years. The pairing of newcomer Waleed Majid and veteran Bashar Hussain shed any nerves as they moved into a 2-0 lead.

That lead became 5-2 before the Chinese Taipei pair steadied the ship as they won two racks to reduce the deficit to 5-4. Waleed bagged the 9 ball to put his side on the hill, and although Chinese Taipei grabbed one back, some superior shot-making in the 12th rack sealed a historic win for Qatar.

Commented Waleed, We are so happy to win; we were delighted just to be at the Betway World Cup of Pool. Today we played against a strong team, one of the top five in the world. We are hoping to make a name for Qatar in world pool.

If you break and you get a good spread you can win the racks and in the short format you can win any match. It was great to play with Bashar – he is a very, very good player with lots of experience and we make a good partnership. We enjoy playing together and as the tournament goes on hopefully as a pairing we can get better.
China overcame a scare against qualifiers the Czech Republic before coming through in the closing straights to secure a second round berth. The Czech pair of Roman Hybler and Michal Gavenciak, who had played in the inaugural event back in 2006, looked in great shape as they reached the hill first at 5-3.

However, that was their last gasp as the Chinese pair of Wang Can and Dang Jinhu found that extra gear to carry them across the line.

Wang Can commented, This is our first time as partners in this event so we feel like novices. In the match we supported each other well and we had to fight hard because Czech Republic played very well, it was a really tough test in our first match.

In the opening match of the session, perennial dark horses Poland kept up their consistent recent World Cup of Pool record with a solid win over Australia. The Poles were quarter-finalists in 2009, 10 and 11 and followed that up with a narrow defeat to Finland in the 2012 final.

Australia, on the other hand, has still yet to win a match at the Betway World Cup of Pool with eight first round defeats in eight attempts. The Polish pair of Karol Skowerski and Mateusz Sniegocki can look forward to a rematch with Finland in the second round.

There are three more first round matches on Wednesday evening as last years runners-up Holland face Sweden, 2008 winners USA take on Croatia and England are up against Spain

All tickets are priced at  (afternoons) and 10 evenings and are available from the venue or www.seetickets.com

Notes: Matchroom Sport are one of the worlds leading producers of televised sport and are responsible for over 1,000 hours of original programming across a range of sports. Based in the UK and chaired by charismatic founder Barry Hearn, the World Cup of Pool is one of a stable of pool events that include the World Pool Masters and the Mosconi Cup.