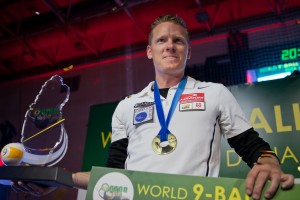 THE TERMINATOR SNAPS IT OFF

Putting in a career defining workman-like performance, the Dutch veteran, for years known as one of pool’s hardest workers,  used every single tool in his vast arsenal, and grinded his way to a hard earned  13-10 victory over Austria’s Albin Ouschan to win the 2014 World 9-ball Championship at the Al Saad Sports Club in Doha.

The victory was Feijen’s first ever World 9-ball Championship and came 15 years after he first turned pro. Along the way the Dutchman has consistently played at the highest levels of the sport, winning tournaments and accolades around the globe. But he’s also had his share of near misses and bitter disappointments, most notably two straight finals losses at the World 8-ball Championship in 2010 and 2011, the former a hill-hill barn burner.

Feijen’s also had to deal with talk from some pool circles over the last few years that perhaps that he might never win the big one, and that he would be forever known as a great player who failed to reach the super elite. But as has been typical of his style for years, the 37 year old Feijen kept his nose to the grindstone, working hard on his game, adding missing details like a tactical game, psychology, and perhaps most importantly a family life with his wife and young daughter. 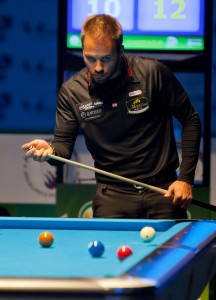 The work, discipline, dedication and maturity paid off big time at the Al Saad today, in a match that will long be remembered for the high quality delivered by both players.  Ouschan, just 23 years old, made a terrific account of himself, battling Feijen toe to toe until the very end. The match came down to just a few mistakes by the Austrian, and also the fact that Feijen seemed to have the will to reach the finish line first.

The pair reached the final after winning their respective semi-final matches earlier in the day by identical 11-7 scores. On the TV table, Feijen met Filipino journeyman Elmer D Haya, who had come all the way from the qualifiers and was a clear long shot.  But Haya, who lives and works as a pool teacher at a pool hall in Abu Dhabi, had the backing of the hundreds of overseas Filipino workers who came to cheer on one of their own looking for an unlikely world title.

The race to 11 match stayed fairly even in the first half, as both players suffered from errors. But midway through the contest, Feijen pulled himself together while Haya clearly was suffering under the gravity of the situation. The moment the Filipino missed a simple 9 in the side to tie it at 7, the match was basically over and Feijen cruised to victory.

Ouschan surely came into his match with Taiwan’s Chang Yu Lung a slight underdog, as Chang had not only been shooting lights out the last few days, but he’d also won his second China Open only two weeks earlier. But the Austrian capitalized on some early mistakes by Chang and took an early lead. Chang tied the match at three, but Ouschan won the next three and never looked back. Chang didn’t find his wonderful stroke until the 14th rack, but by then, down 9-5, it was too late.

After an hour’s rest, Feijen and Ouschan came back for the race to 13 final, and considering how both had played in the semis, as well as the previous days, it was difficult to predict who would come out on top.  Feijen seemed to get the majority of nods, if only because he was so much more experienced than Ouschan. But all week Ouschan had shown the ability to persevere, and to take a lead when it counted most.

Right from the start in the final, Ouschan continued his quiet and focused approach as he went up 2 – 0, first with a brake and run, then by forcing Feijen to foul.  Niels got one back but gifted Ouschan in the next frame with a miss on the 5-ball to make the score 3-1.

Feijen finally started to find his rhythm as he notched the next four frames, including two via break and runs, to go up 5-3.

Ouschan then grabbed the next two to tie at 5-5, as the two battled in the trenches for each and every ball.  Feijen won a terrific safety battle in the next rack to go up by one. But then Ouschan countered with two of his own to retake the lead at 7-6. Feijen returned the favor with a two-pack to go up 8-7. He would never trail again.

Feijen got a lucky break in the next frame when the 1 ball peaked out after a failed jump by Ouschan, and a solid clear put him up by two, 9-7. Feijen looked to be going up by three in the next rack but he missed a makeable 9-ball and now only led by one again.

At this point the match was downright testy, as both players didn’t want to give an inch. But Feijen’s maneuvering in the next two frames  showed his class and pretty much sealed the deal. After a safety battle, the Dutchman deftly potted a ball and broke up a cluster to open the table for the clear. Then Feijen got Ouschan to foul off another terrific safety to get his first three rack lead, 11-8.  A subsequent break and run put Feijen on the hill and one away from glory.

But as was typical of Ouschan all week, he simply wouldn’t quit.  After a break and run, he cleared off a mistake by Feijen to make the score 12-10 to apply some serious heat.

With the pressure building the pair duked it out yet again in the next rack.  Feijen, now clearly under duress, was forced to give up the table after leaving the 5-ball near the side pocket. Ouschan could have jumped and potted the 5, but he chose to kick down and up table to try and slide the 5-ball in. Instead the cue missed the orange ball by a hair resulting in a foul. With ball in hand, Feijen simply had to connect the dots. As the last 9-ball fell, Feijen partially collapsed onto the table in sheer relief and disbelief that he had finally won the big one.

Afterwards, an emotional and overjoyed Feijen talked about the flood of emotions he had experienced throughout the match, and how he had to constantly fight the demons that were taunting him. He also rightfully wasn’t shy about taking personal credit for all the hard work that he had put in to reach this momentous point in his career.

“The hardest thing in that match was not thinking about winning,” Feijen said.  “I was so nervous in the beginning because all those demons came back from those two losses in the 8-ball. And then I got down 3-1, then I tied it at three and then I got into it.

“My tactical game was huge. My break wasn’t working at all. I got hooked so many times. I was kicking safe, I was playing safe, so that got me in the match. So it was a big old battle. The tactics was huge.

“From midway I started playing real good I think. A couple of mistakes, then I got up 12-8. And then you’re mind’s going crazy. You start thinking about winning, you thinking ‘please give me one chance and I can win,’ you’re daydreaming about the speech, the title. That’s the hardest thing, to stay composed.

“I think I really deserve it. You just gotta go grab it. Nobody’s going to give it to you. It was the fight of staying composed, patience, executing well and blocking out all those bad things and the good things. The hardest thing was staying in the moment. And I think I did really well and in the end I finally snapped it off.

“You don’t get many finals in your life. Some people never get one chance to get a final. It took me a couple of years to get a final again and this is the first 9-ball final I had. I was thrilled to get a chance and I said go ahead and take this chance.”

Ouschan , while clearly disappointed, remained as stoic after the match as he had been  all week on the table.

“In the middle of the match I was a little bit too nervous,” Ouschan said. ” In the beginning everything was perfect. I made one bad mistake and then everything turned. I couldn’t find my rythym again. He got lucky two times, but that’s pool. He deserves to win.”

Indeed, everyone who watched the match would agree with that notion. With his solid work ethic  and good attitude, Feijen is one of the game’s good guys. When asked if the win would change his life, the new World 9-ball Champion said no. But he is certainly going to savor his hard earned success for many years to come.”¨”¨”Nothing’s going to change. I got back to my girls. I’ll just be happy being home. Prepare for the next event. I don’t let things go to my head. When I get home I’m just a regular dad. I get my daughter again so I got work. My life’s not going to change. This is just the cherry on top of the ice cream to win it finally.”