(Shenyang, China)–It’s true that hard work and perseverance do pay off. 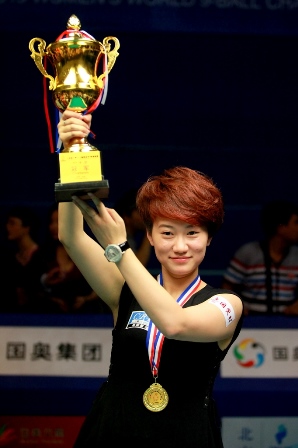 Han Yu, who joined China’s national billiard team five years ago when she was just 16 years old, finally fulfilled the dream that she and her coaches knew would someday come. And what a way to do it. In front of several hundred people watching inside the Richgate Shopping Center in Shenyang, and an estimated audience of nearly 100 million people watching on China’s state television,  Han completely outclassed Taiwan’s Lin Yuan Chun, 9-1, and won the 2013 WPA Women’s World 9-ball Championship.

Han’s victory means that Chinese players have won four out of the last five Women’s World 9-ball Championships. The win also cemented the fact that, but for a few exceptions, the epicentre of women’s 9-ball pool is well ensconced in China.

For the last few years, the talented Han has noticeably taken a bit of a back seat to the more high profile players on China’s national team, such as Liu Shasha, Fu Xiaofang, and Chen Siming. But that all ended today with a scorching performance against Lin. Han now sits atop the pool world. And with her talent and noticeable confidence, she can only be expected to achieve even more.

Interestingly Han very nearly didn’t even qualify for the knockout round of 32. She had to win a 9-8 squeaker just to get a spot in the round of 32. Once through, however, she was barely challenged, as she displayed a panache and bravery that couldn’t be touched.

Han started the day with a workman-like 9-6 victory over Taiwan’s Tan Ho Yun.  Lin, who won this event back in 2008 but hadn’t done much since then, played brilliantly to reach the final. Her 9-6 win over the fancied Liu Shasha in the semi’s was impressive, as she battled Liu toe to toe and sprinted to the finish line in the championship racks. 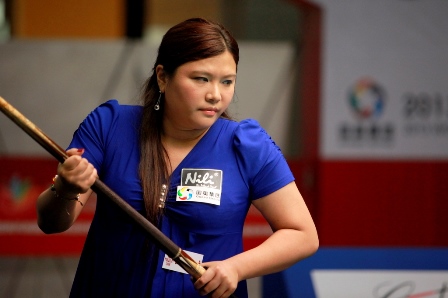 The 28 year old Lin, however, began the race to 9, alternate break final straight on both back feet. Two mistakes in the first two racks quickly put her in an early hole. She got one back to move to 2-1, but a scratch in the fifth rack put her down 4-1.  Lin fouled again in rack 6 and Han cleared to go up 5-1. In rack 7, Han sank the 9-ball on the break. Before you could say “World Championship finals,” Han was up 6-1 and waltzing towards the title.

Sometime in the subsequent rack, a tournament official came over and informed the referee that the golden break of Han was actually an illegal  break, meaning that three balls hadn’t passed the head string. But since the referee hadn’t called it, and nor did Lin, the golden break stood. No matter, though. Han pulled off a brilliant run out and now led 7-1. Han broke and ran the next rack to move to the hill. Then she pounced on a miss by Lin in the 10th rack and stood up and cleared the table for the world championship.

As she packed up her cue case, the low key Han suddenly found herself surrounded by mobs of fans wanting her autograph and photo.  She seemed almost nonchalant about what she had just accomplished, only until her mother came into the scene. After a very long embrace, Han broke down in tears.

Afterwards, while explaining how it all happened, Han displayed the same quiet fortitude that she had on the table. No boasting, no wild celebrations, no getting too impressed with one’s achievements. Even the way she said she deals with pressure seemed downright clinical.

“This was my best match of the week,” the new World 9-ball Champion said through an interpreter. “I just felt really good out there. My mental game, my technical game, it all came together. I wasn’t nervous. There’s really no point in getting scared. I just tell myself that I have to play my game. If I can play my game, then I can do it.”

She made a point to thank her parents, especially her father, for nurturing her dream of becoming a champion pool player.

“When I was younger my father liked to play pool and he encouraged me to play.  My mother just wanted me to study and she didn’t want me to play pool. But I wanted to play pool because it’s a popular international game. My father won out (laughs). I always wanted to win a world championship and from the beginning I always wished that my dream would come true. Now it has. I’m happy.

As she faced a scrum of media Lin was clearly disappointed in the final result. After winning the world title in 2008 she hadn’t accomplished much in pool and she thought that her play this week was the sure ticket back to the top. As usual in Chinese culture, however, graciousness won out over disappointment.

“It was just bad luck,” she said. “I wasn’t nervous. Maybe it wasn’t my day. I missed some chances and she played really well. All I can say is congratulations to Han Yu. She played better and she deserved to win today.”

Please visit the WPA Facebook page for the 2013 Women’s World 9-ball Championshipat the link below.

Quaterfinals begin Sunday at 1pm local time. Each quarterfinal will be played separately on the TV Table.

Day 2 final results in the losers brackets. Winners advance to final 32. Losers are out