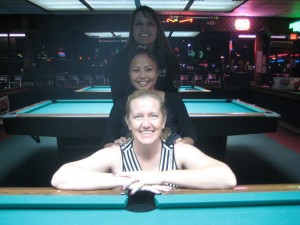 Ming Ng took the new Gulf Coast Women’s Regional Tour Inaugural 9-ball Event by storm, defeating Gail Eaton two sets in the true double elimination final, 7-6, 7-3. Women of all skills levels came together last Saturday, June 15th, 2013 at Bogies Billiards in Houston, Texas to compete for over $1,000 in prize money and WPBA Regional Tour points. Among the field of competitors were former WPBA pros, APA players, and BCA players alike, representing Austin, Katy, Humble, Santa Fe, Boerne, and Houston, Texas. Matches commenced at 11:45am on Saturday following the players’ meeting. As play wore on, a seemingly indomitable Eaton bested Diana Cardona 7-2, Emma Stewart 7-1, and Ng, 7-3, taking her rightful place in the hot seat. Teresa Garland followed suit defeating Toni Esteves 7-6, Malinda Williams 7-3, and finally Loretta Lindgren, 7-6. Eaton handily secured the hot seat over Garland, 7-2, while on the west side Cardona won 4 straight sets before Ng stopped her cold, 7-0. Lindgren became Ng’s next victim by the same score which pitted a first time match-up with Ng and Garland. Ng won the first game of the set making 15 consecutive games won before Garland ended her streak with a game win, tying the score 1-1. It was a tight set and both players appeared fatigued. At 6-6, Garland fell short pocketing the 8-ball and Ng closed out the set, 7-6. Eaton, holding her victims at 3 games or less, knew the task at hand would be a difficult one; Ng was out for blood. As suspected, Ng shot out of the gate against the undefeated player, taking immediate control of the match. Eaton forged on, still determined to capture the first set and call it a night. After a few unforced errors by Eaton, Ng took full advantage, along with the case game, to send the event into overtime. A breath of new life had enveloped Ng as she wasted little time in the second set, defeating Eaton, 7-3. It was a well-fought final, full of exceptional play worthy of any pool enthusiast crowd.  The GCWRT is sponsored by the Delta-13 Rack, www.delta13.com and the APA of North Harris County, www.facebook.com/apanorthharriscounty.  The GCWRT would like to officially “welcome” its 18 new members and invite them back at every opportunity. The next event will be held at Emerald Billiards in New Iberia, LA., on September 7th, 2013. Stay updated at www.facebook.com/gulfcoasttour . For more information, email gulfcoasttour@gmail.com. 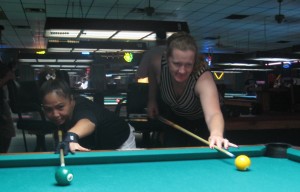