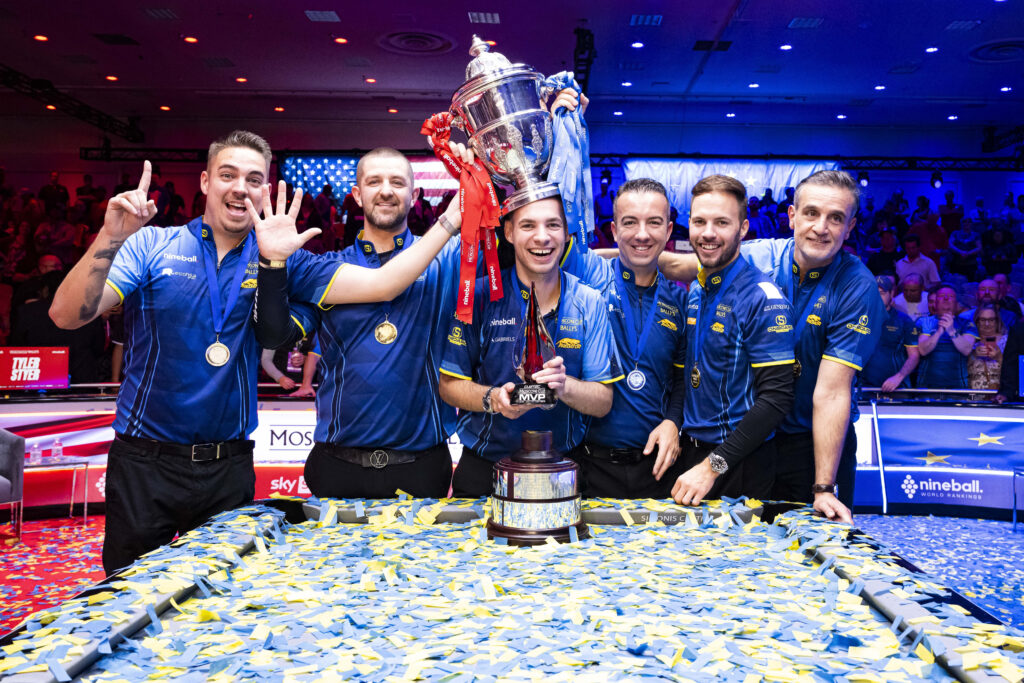 Team Europe won the 2022 Mosconi Cup beating the USA 11-7 at Bally’s Las Vegas as Cuetec MVP Joshua Filler sunk the winning balls in the third match of the day to secure the cup for a third straight year.

Going into the final day of play, Europe had a two-point buffer on the USA at 8-6 but that lead was soon cut to one as the World Cup of Pool winning duo of Francisco Sanchez Ruiz and David Alcaide struggled for mojo as the US’s duo of vice-captain Skyler Woodward and world champion Shane Van Boening rallied to an important 5-3 win.

Alcaide had struggled with the table conditions and cue ball control in the opener but something seemed to click in his singles action with Woodward in red-hot form and gunning for an MVP crown. Woodward made light work of the early racks to lead 3-1. The turning point came in the next rack with Woodward missing a costly five and Alcaide finding a groove to run through to victory 5-3 and put Europe two away from the title.

The Mosconi Cup rivalry for the ages lived up to all expectations as Jayson Shaw clashed with Shane Van Boening to potentially put Europe on the hill, something he has done previously. Shaw and Van Boening looked nervy for large parts in the rowdy atmosphere in Sin City. Van Boening scratched in the third rack but managed to get back to the table from a Shaw error to be ahead at 2-1. It was the case of whoever settled first would come good and that did prove to be Shaw who did so to lead 4-2 after Van Boening slipped on the six. It was mission complete for Shaw who ran out a 5-3 winner. One away for Team Europe.

As it was in 2017 and 2021, it was left up to German superstar Joshua Filler to bring it home and sink the winning balls this time against Tyler Styer for a memorable win in Las Vegas, the first time Team Europe has achieved such a feat since 2017. Styer looked out of it for large parts but could’ve made it hill hill. It looked as if Styer would have a routine run out only to run aground on the eight to leave it in ample range for Filler to step up and seal the Cuetec MVP title and the 2022 Mosconi Cup crown.

Filler said: “I am so overwhelmed right now but let’s go, we did it again! I was so nervous but then I was something in between, relaxed and nervous. It’s amazing to be MVP. It’s incredible. I started always pretty good but this year, yesterday I wasn’t 100% there. Being MVP is great, to win with this team and togetherness is a dream.”

Captain Lely said: “It was some show. I want to thank the American fans. It was amazing There was a lot of heat. From now to the future, the home-court advantage is massive. Two years from now will be bigger crazier, and more intense than ever. I have a lot of appreciation for how the Americans handled themselves. They put them under a lot of heat. The team is special. It’s a team of champions. Finding a way to get it together with all the egos in sync is quite a challenge but we’ve been working together for a few years. Jayson Shaw as the vice-captain was brilliant.”

The 2023 Nineball Schedule will begin with the 2023 World Pool Championship set to take place from February 1-5. More news is to follow ahead of the next season getting underway in January with Diamond Billiards’ Derby City Classic Nineball Division and the Turning Stone Classic. See more here.