March 30, 2013 (Englewood, CO): On March 23rd, despite the biggest snow storm of the year and highway closures, the Str8 Shots team and Felt Billiards staff gave a packed house of pool fans and players a warm place to spend their Saturday. Headed by Mark Cantrill, the Legends & Champions Pool Tour treated the mile high city to an unforgettable engagement. 8-time world champion and hall-of-famer Nick Varner was joined by two-time world champion Thorsten Hohmann of Germany for an extravaganza dedicated to raising money for the juniors of the Billiard Education Foundation (BEF).

30 young hopefuls arrived on the snowy day to vie for their chance to attend the 2013 BEF Junior National 9-Ball Championships held July 25-28 at the Convention Center of the Rio in Las Vegas. Of the four divisions, the 14 & under boys saw the largest field of 14 players, followed up with six in the 14 & under girls and 18 & under boys, and four in the 18 & under girls. An full 32-player open event was also held alongside the juniors event.

Players made a $10 donation to the Billiard Education Foundation (BEF) for their shot at the two world champions who spent the next two hours taking challenge after challenge to help raise money. Finally, they broke for pizza with the kids and with the little daylight left, Hohmann borrowed a pair of winter gloves and stepped outside with the Str8 Shots crew to build a snowman.

It was a memorable day that Colorado pool fans will cherish for years. The BEF raised over $1,600 and the kids of the Denver Junior Billiards League raised nearly $800 for their trips to Junior Nationals. This was the first of a series of many more juniors and adult events presented by Str8 shots. Visit their website for more information, including the complete event photo galleries: www.str8-shots.com.

Special thanks go to Str8 Shots, Felt Billiards, Kamui, Lucasi, Masters Chalk, and Legends & Champions Pool Tour. Without Str8 Shots, the event would not have been possible. Special recognition also goes to Jim Calderon for running the open event, Summer Sunshine for her help with the youth event, Brandie Rejent, Travis & Tarasa Escoubas, Damon & Katie Barnhill, the junior players of the Denver Junior Billiards League, and all the other parents that stepped in to help. 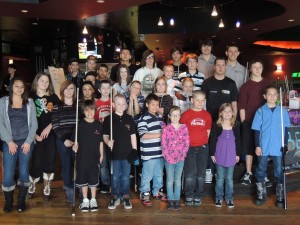