Licensee Of The Month – TAP

After playing in pool leagues for the past 20 years and giving players the chance to play in a home grown cash league the opportunity to build TAP in Southwestern Ontario came along.  As we enter into our 9th year we reflect on our growth and pleasures we have received from being part of the TAP family.
During our first year we experienced the National event in Louisville and made great connections.  The support from the corporate office has been amazing!  Rob has been a face that players began recognizing at national events and a voice that isn’t easily forgotten!  While working registration, inputting or the tournament desk at the national events we have made many life long friends throughout Canada and the United States.  As licensees we feel it is important to get involved to make this league the best it can be.
Outside of TAP Rob has recently retired from his position as a Health Physicist at the Bruce Nuclear Power Plant and Janet is working in the public school as an Educational Professional with high needs behavioral children.  When not at pool we have several old cars and spend the better weather at car shows throughout Canada and the United States.  Our oldest son (who plays in the league) and his wife have blessed us with 2 (soon to be 3) grandchildren, with the oldest being just 3 with her own cue and developing a love for the game!  Our youngest son and his girlfriend also join us in league play 3 nights a week and enjoy the higher level tournament play as well.  We look forward to many years of sharing TAP with our family. 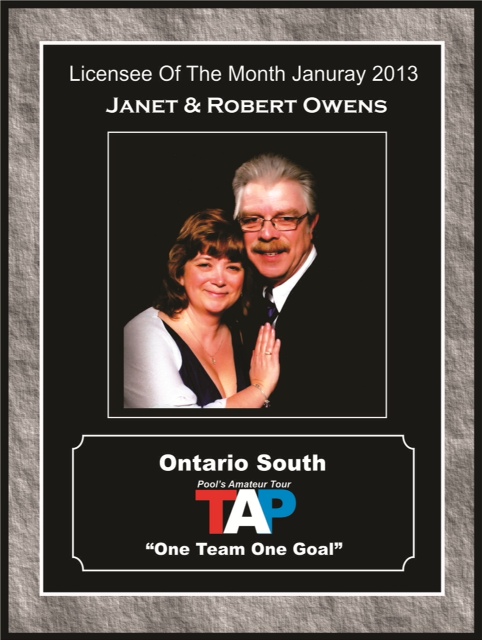