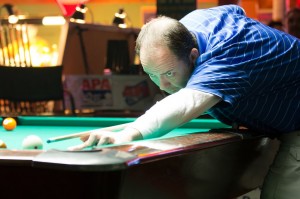 The inaugural Space City Open event paid out right under $23,000 in its first run. Vendor set-ups for this event began at 12pm on Thursday, December 6th, 2012 and included Ron Geyer’s Custom Cue Connection, Connoisseur of Fine Cues’ Joe Salazar, Play the Game Clothing, and the APA of North Harris County. Banners were also hung on Thursday and included advertising by Aflac, Omega Billiards, and Tejas Transmissions.

The Space City Open, held Dec. 7th-9th, 2012, was a culmination of efforts by several Houston, Texas area businesses including Bogies Billiards, Lone Star Billiards Tour, and the APA of North Harris County, in addition to sponsorship provided by Inside Pool Magazine, Delta-13 Rack, OB Cues, On Site Pool.com and KC Pool and Poker.com.  To kick-off the event, Pro Player Corey Deuel hosted an OB Cues Pro Pool Clinic while WPBA Pro Vivian Villarreal hosted her own Texas Tornado Pro Clinic as well, on Friday afternoon.   John Newsome conducted the players’ meeting and draws which started promptly at 7pm, followed by one round of One Pocket. 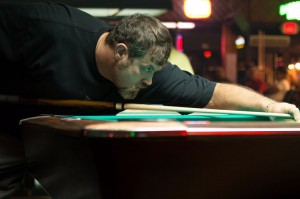 There were 59 players in the Open 9-Ball division with matches starting at 10am Saturday, playing down to the final 16 for Sunday. In early round action, UK’s Derek Sim bested Sonny Demetro, 9-2, and Rodney Stewart, 9-6, while Corey Deuel briskly made his way to the final 8 winners’ side with wins over Eric Renteria, 9-2, and Jeremy Jones, 9-7. Justin Hall fought through Rafael Martinez, 9-4, and Jeff Fox, 9-7, while Sylver Ochoa, Charlie Bryant, Adam Shaw, Vivian Villarreal and Joey Barnes also made their way to Sunday’s 3pm winners’ round. 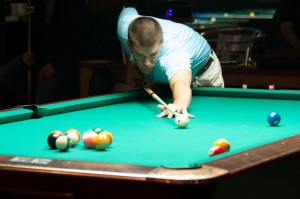 Sunday’s first round of 9-ball saw the UK’s Adam Shaw fall to Bryant, 9-8, and Villarreal to Barnes, 9-5. Ochoa bested Hall 9-6, and it was Deuel over Sim, 9-5. On the one-loss side, Martinez eliminated Sim and Hall, while Jones made an impressive run with wins over David Henson 7-3, Raul Escobedo 7-4,  and Shaw, 7-6.  On the winners’ side final four, Deuel bested Ochoa, 9-4, and Bryant overwhelmed Barnes, 9-6. After losing his second match to Hall 9-4, Martinez was on a mission, winning six consecutive matches until he came up short against Barnes, 7-6. Joey Torres came through the one-loss side quite nicely with wins over Denis Strickland and Vivian Villarreal, until Jones took the reins, 7-4. This paired Barnes and Jones on the one loss side. The score was 1-1 when Jones closed the set out winning 6 consecutive games. Hot seat action saw Deuel and Bryant trade racks for 8 games. Deuel would only win one more game as Bryant pulled ahead and ended the match, 9-5. Deuel made quick work of Jones, 7-4, to meet up, once again with Bryant. In the final, Deuel strung the first 4 racks with his steady break and fluid stroke. Deuel’s effortlessness at the table astonished onlookers, however Bryant was determined to get back in the game. After a couple of unforced errors by Deuel and a few text book breaks by Bryant, it was dejavu with the score tied at 4. Bryant kept his momentum, winning 3 more games in the same fashion, surging to a 7-4 lead, only to see Deuel answer back with 2 games of his own. Deuel seemed back in the swing of things as if the set had just begun. Bryant responded with 1 more game making it 8-6, and once again Corey came back to make it 8-7. It was a true fight to the death for both opponents until Bryant took his turn and ended the set 9-7.

The 9-ball and One Pocket divisions drew such an incredibly talented field of pros from all over the country that Bogies Billiards’ owner David Richardson looks forward to hosting this event for years to come. “We want everyone to know that Bogies is a pool room for the “players”, first and foremost. Along with the (8) 9′ gold crowns, we added a Diamond Pro Am pit table because we knew the players would appreciate it.”

The One Pocket action was intermittent on Saturday and Sunday as players made their way from their 9-ball matches to their one pocket matches. There were 28 One Pocket players in all with the final 8 being procured for Sunday.  The final four winners’ side included Justin Hall v. Rafael Martinez and Jeremy Jones v. Charlie Bryant. After a first round loss to Deuel, Joey Barnes came back to make the final 8 and face Deuel once again. After losing to Martinez, 4-3, Chase Rudder met up with Ochoa who had suffered a loss to Hall earlier, 4-2. Back on the winners’ side, Hall bested Martinez, 4-2, and Jones made quick work of Bryant, 4-0. This pitted Hall and Jones for the hot seat. Meanwhile, Ochoa and Barnes advanced one more round to meet Bryant and Martinez respectively. Bryant eliminated Ochoa, 3-1 and it was Martinez over Barnes 3-2. Bryant forged ahead one more set, eliminating Martinez, 3-1. On the east side it was a tight cat bird’s seat match with Hall and Jones that ended with Jones the victor, 4-3. Hall made quite an impression on the Texas crowd with his smooth style of play and easiness at the table. He went on to defeat Bryant, 3-1, earning himself a rematch with Jones. The matches in this One Pocket field were ESPN worthy, with the final being no exception.  Each player seemed relaxed, executing calculated safeties which brought the score to 1-1. Games were traded until Jones pulled 3-2, then 4-2, winning the One Pocket event undefeated. 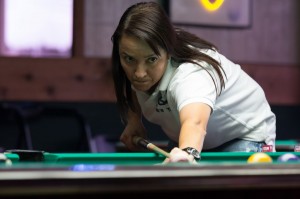 Vivian Villarreal, the “Texas Tornado” defeated Ming Ng, the “Empress”, in the finals of the women’s 9-ball division on Sunday. Alison Fischer, the “Quiet Storm”, defeated Ricky Casper and Liz Mitchel in earlier rounds, earning herself a shot at Villarreal and the hot seat. Pro player Kim Pierce who suffered an early loss to newcomer Liz Mitchel, 7-5, came back to face Ng who suffered her initial loss to Villarreal, 7-1. Fischer succumbed to Villarreal for the hot seat, 7-3, while Ng eliminated Pierce on the one loss side. Ng made quick work of Fischer to meet Villarreal for a rematch in the finals. Villarreal felt right at home on the bar table, stringing 5 racks in the final and winning the set, 7-1.

Tournament supporters hope to bring the SCO back to Houston in 2013 with even more added money. Pro player, tournament director, and presenting sponsor, Kim White-Newsome will make this an annual event, to be held each year, the first weekend in December. “We wanted a staple tournament for the Houston area, one that the players could count on and look forward to playing in each year.” Due to the caliber of players in attendance, the Space City Open has sparked the interest of new, potential, sponsors. Promoters are already calculating a minimum of $6,000+ added for 2013.