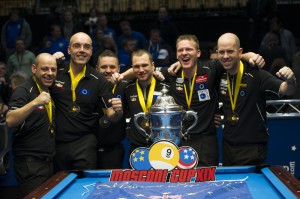 EUROPE HAVE retained the PartyPoker.com Mosconi Cup, defeating the USA 11-9 in front of a packed York Hall to make it three wins in row in the annual transatlantic team tussle. It was Holland’s Nick van den Berg who dropped the final 9 ball of the four day event to spark wild scenes of celebration.

The Americans were on the floor after the Wednesday night session, trailing 9-6 going into the final day but they dug deep and turned the tide as they won the first three matches to level it at 9-9 and make it anyone’s match.

It was Chris Melling though, a deserving MVP, who stopped the rot with a confident 5-2 over Brandon Shuff and then Nick Van den Berg who closed out a dog fight with Mike Dechaine to win the final match for the Europeans.

“That was by far the most thrilling Mosconi Cup win of all,” said a jubilant captain Johan Ruijsink.

“They pulled out a big gun today and it was really hard work. I’m happy for the fans and the team; absolutely delighted and over the moon!” he added.

Van den Berg was relieved to get the team over the line in what must rank as the greatest moment of his career. 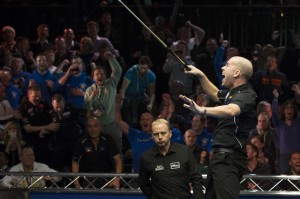 “I think my heartbeat was about 220 the whole match and Johan told me to calm down but it was almost impossible. That last shot, I had to break it open, but it worked out perfectly. That must be the most exciting match of my life but also I made a lot of mistakes but in the end I won.”

All players had fired throughout the tournament and England’s Darren Appleton consolidated his position as a potential Mosconi Cup legend.

“The emotion is amazing, it is all about the team. The Americans fought really hard today, showed a lot of heart but at 9-9 Melling played unbelievably and Nick at the end that was just a dog fight.

“The pressure is unreal, it is just crazy out there and the crowd is amazing.”

Chris Melling looked assured throughout and his MVP trophy was the result of three superb singles wins, “It has been unbelievable. It is a dream come true to win it once but to win it twice is just unbelievable. Wow! I cannot believe I have won the MVP. The first two days I started off very slowly, lost two 5-4s which I could have easily won but I came good at the end.”

For Niels Feijen it was his fifth Mosconi Cup win and sweeter than the others, “This is the best, the heat was really on. We were up 9-6 and they came back and left us really nervous. Chris came out, started firing and then the pressure on Nick was unbelievable.”

Finally, debutant Nikos Ekonomopoulos played a huge part as he took down America’s top player in his opening singles match to set the tone for days two and three, “It is very exciting, the atmosphere is very nice. I like it very much. We played very well, I think we deserved it but the USA also played very well.”

The Americans started the evening three behind and first out was Dennis Hatch, playing in his third Mosconi Cup, and he needed to do something to stem the flow and give his side a chance and he did just that, beating Nick Economopoulos 5-3 to put his side within two of the Europeans.

Hatch looked better than he had done at any point in the tournament in what was a scrappy match but he took advantage of some errors to claim the win.

Johnny Archer continued to show the sort of form that has given him the record for Mosconi Cup appearances, as he took care of Niels Feijen 5-1 to give the European side an uneasy feeling as their three point lead started to evaporated.

The Georgia veteran was the definition of focus as he kept everything out and played about as good as he could under the testing circumstances. In fact, Archer was unbeaten throughout the week – a stunning feat.

There was more American joy in the next as Shane Van Boening did a number on Darren Appleton, running out a 5-1 to tie the Mosconi Cup up at 9 all.

The Englishman suffered a couple of bad rolls, but like Hatch and Archer before him, Van Boening was a picture of focus and determination. The South Dakotan ended the watch with a spectacular table length combination bank shot on the 9 ball. He had run out of position and it was his only real option and it paid off in spades.

Finally it was Chris Melling who stopped the rot when he beat Brandon Shuff 5-2 to put Europe on the hill. Shuff was fighting the nerves as well as Melling but like his team mates before, tried to stay focused and he stayed with the European in the early stages. Melling though started to come with his best in the latter stages and in the end there was only one man in it.

His piece de resistance was in the final rack when, blocked behind the 8 ball, played a side rail kick shot to pocket the 6 ball in a move that would have done Efren Reyes proud.

That set the stage for Nick Van den Berg to seal another glorious Mosconi Cup win for the Europeans. They will be returning to Las Vegas in December 2013 as they go for win No.4.

For the Americans it was more disappointment and they have now won this tournament just once in the past seven years. However, they can take some heart from the courage that they showed in the final day.

“For the first three matches we were playing very well, we had the momentum, and then we had a key match that could have gone either way,” said skipper CJ Wiley.

“I cannot complain, the first three players did a fantastic job and we just had a little hiccup on the fourth one but there is next year. We have plans for them in the United States. I hope they enjoy it, for one year.”

Finally, Johnny Archer summed up American feelings; “Firstly I would like to say I am very proud of my team, they showed a lot of heart today. We were down and my hat is off to the European guys, they outplayed us for the week.

“The guys showed a lot of heart today, we were all so nervous and under a lot of pressure but they are great champions.”

The title sponsor of the Mosconi Cup is PartyPoker.com, tables are supplied by Diamond Billiards, balls by Aramith, Simonis 860 is the Official Cloth and Predator are the Official Cue, and chalk supplier.

Notes: Matchroom Sport are one of the world’s leading producers of televised sport and are responsible for over 1,000 hours of original programming across a range of sports. Based in the UK and chaired by charismatic founder Barry Hearn, the Mosconi Cup is one of a stable of pool events that include the World Cup of Pool and the World Pool Masters