On Friday and Saturday, November 2-3, 2012, the first Doggin’ It for Charity Pool Tournament was held in Temecula, California, to benefit the ongoing efforts of the Animal Rescue Kompany (A.R.K.). Hosted by High Society Billiards and Dart of Temecula, California, owner Kelly Ferree and his son Brian were on-hand as pool players from San Diego, Riverside, Orange County and Glendale, California, came out to show their skills and support this event.

Proceeds from the tournament went directly to A.R.K. as they work to provide care for unwanted animals, and search for new homes for animals who otherwise face the possibility of euthanasia. Along with the players, A.R.K. wishes to express their appreciation to High Society for hosting the event, Brian Ferree, High Society Table Refelting, and Autumn Grucellia, In The Pocket News, for their cash donations, and Dave “The Ginger Wizard” Pearson, David Olhausen, Olhausen Game Rooms, Kearney Mesa, California, for their donation of auction items. Finally, a special thank-you to Mary Ann Starkey, GoPlayPool.com and Paul Frankel, Professor Q-Balls National Pool and Three Cushion News, for helping us spread the word. 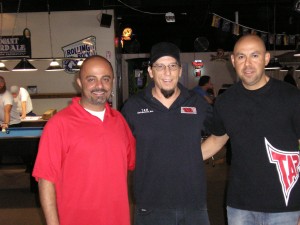 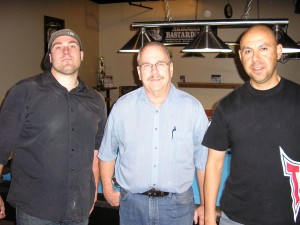 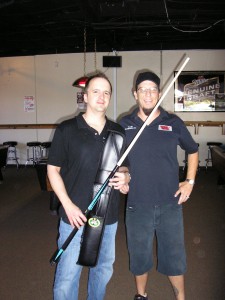 A G&W four point cue which was donated by Dave “The Ginger Wizard” Pearson signed by Dave, Tom “Dr. Cue” Rossman, and Jerry Briesath was won in a raffle by John Sperka.

If are interested in helping the Animal Rescue Kompany in their ongoing efforts, please contact Mr. Michael Brown, (951) 491-9307, or Sharon McGilvery, (909) 896-2852, to discuss your interest or send email to www.animalrescuekompany.org. A.R.K. is a 501(c)(3) organization serving the Inland Empire and Southern, California.