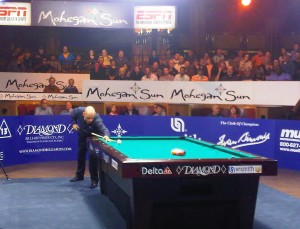 “This is the toughest tournament in the world,” said an elated Darren Appleton moments after capturing the 2012 International Challenge of Champions title. The pressure packed $25,000 winner-take-all event was held at Mohegan Sun in Uncasville, Connecticut, October 23.  Appleton, from England, defeated Shane Van Boening of the USA by a thumping score of 5-1 and 5-1 in the final match, and was crowned “Champion of Champions” for an incredible second year in a row. The two semifinals and the Championship match were taped by ESPN for telecast beginning December 9.

“You have to be on your game the entire tournament,” said Appleton. “There’s no margin for error when every player is a champion. One shot missed and you can lose $25,000! The pressure is just incredible.”

Indeed, of the four international champions in the event, Appleton had to fight to defend his title as the reigning “Champion of Champions.” The Semifinal and Final matches require the winner to win two sets, race to 5 games each set. In the event of a tie, the pressure becomes intense with a one game sudden death shootout.

Appleton played US Open 10-Ball Champion Dennis Orcollo in a semifinal match, which went into sudden death. Orcollo won the first set 5-2 and Appleton surged back to take the second set 5-3. H He He then won the lag for the one game sudden death, and after trading safeties, he ran the table to close out the match.

Van Boening, the 2012 Players 9-Ball Champion, defeated the Jung Lin Chang of Taiwan, the 2012 World 8-Ball Champion, in the other semifinal that also went into sudden death. Chang took the first set by an impressive 5-0, but Van Boening found his stroke to claim the second set 5-3. After battling back and forth in sudden death, Van Boening ran out to emerge the winner.

Appleton’s final match against Van Boening, featured flawless run outs and exquisite safety play on Appleton’s part. Van Boening was unable to get out on his break four times in the two sets, which left him trailing far behind in a lopsided contest. Known for his pinpoint accuracy, Appleton handily won the Championship match in  unstoppable form with scores of 5-1 and 5-1.

The crowd gave Appleton a standing ovation when he won the final match. He raised his arms in victory and then accepted the highest single purse in international winner-take-all tournaments. The trophy and the check were presented by Mohegan Sun and Diamond Billiard Tables. The presentation brought another round of cheers from the audience.

The 2012 event was the 22nd annual International Challenge of Champions and the sixteenth to be held at Mohegan Sun. Tom Cantone, Vice President Sports & Entertainment for Mohegan Sun, was delighted with the support displayed by the turnout of pool fans. “The crowds were even more than we anticipated, and the players were amazing,” he said. “We are extremely pleased.”