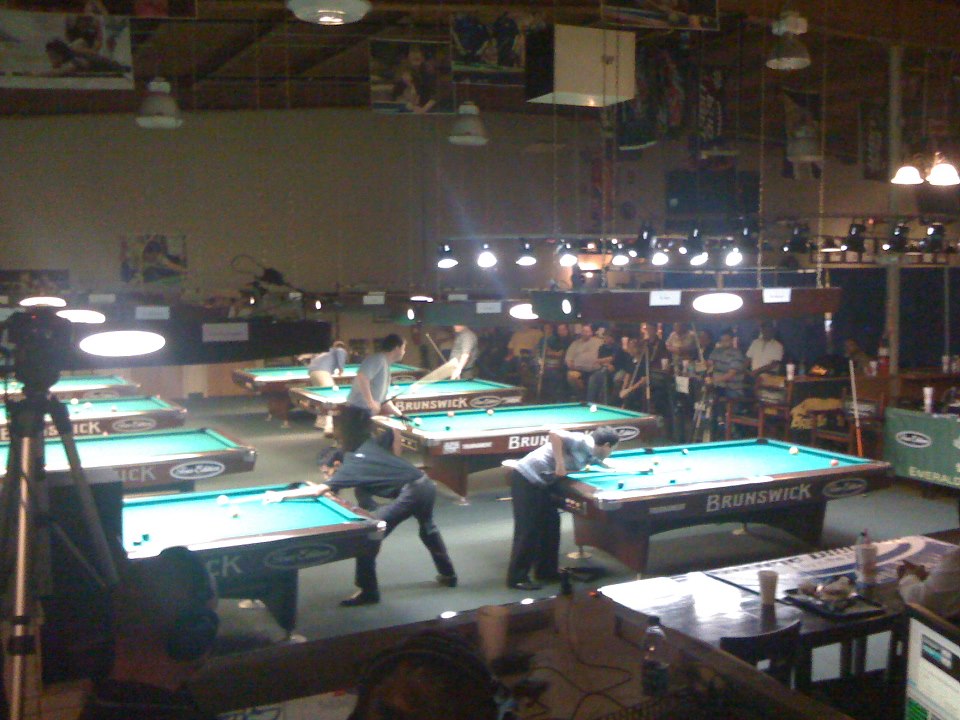 New Iberia, Louisiana- #16 seed Thorsten Hohmann of Germany took down #1 seed Shane Van Boening of USA on Day 1 of the Championship Cloth 5th Annual Pro Classic.  The Dragon Promotions Pro Classic events are a pro 9-Ball and 10-Ball event during October 16th-20th, 2012. The events take place side by side to the Ozone Billiards US Amateur Open all hosted by Emerald Billiards and produced by Dragon Promotions.

Hohmann dominated the match from beginning to end in a convincing 9-3 win. Hohmann had a long streak of losses to Van Boening for 2 years, until ironically, last year’s Pro Classic where he finally defeated Shane in the semi-finals. And, on the same tv table, they played last night where Hohmann made Shane relive that moment.

“I played well but also was fortunate off my breaks”, said Hohmann. Hohmann will move into the 3rd round and face #9 seed Charlie Williams.

Van Boening went to a practice table after the match and worked on his 9-ball break, perfecting it a little too late as he shrugged his shoulders.

Earlier in the day, up and coming Hunter Lombardo continues his rising play with a 9-2 dominating win over Ronnie Alcano. Hunter was able to neutralize Alcano with several break and runs. Alcano was late for his match as he arrived from the airport and seemed to get more in stroke later as he bounced back with 2 wins including a major win over Mike Davis.

ALSO New Iberia, Louisiana-  18 year old sensation Wang Can of China continues wowing fans and players, this time with a 9-6 win over legendary Johnny Archer. Wang is making the most out of his trip so far with his money finish at The Johnny Archer Classic and continues with his streak in Louisiana. The Championship Cloth Pro Classic events are a pro 9-Ball and 10-Ball event during October 16th-20th, 2012. The events take place side by side to the Ozone Billiards US Amateur Open all hosted by Emerald Billiards and produced by Dragon Promotions.

Wang Can flew to the USA for the first time by himself to Georgia. He was greeted and picked up by Johnny himself.  He made many fans and friends in Marietta and even drove to Louisiana with his new road partner Tommy Najar (only 10 hours!) .

Wang had the privilege of playing Archer and did well. More than well. He led the entire match, and Archer had a chance to make it closer in the end, but missed a open 4 ball. This led to Can’s 9-6 win over the USA champion.

On the other side, Robb Saez made the most of his 9-8 win over Adam Smith when Smith missed a 7-ball to win the match. Saez went on to defeat Warren Kiamco who hasn’t lost a match in his last 3 events. Saez is now entering the final 4 of the winners side.

The events are being streamed live on www.poolactiontv.com  and sponsored by Ozone Billiards and Predator Cues.