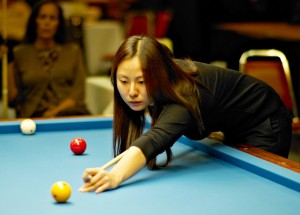 New York player Ester Park has been selected to participate in the Women’s 3-Cushion World Championship in Tokyo, Japan, in November.  Park, the runner-up in the 2008 United States Women’s Tournament, was a last minute replacement authorized by the Union Mondiale de Billar (UMB) and the ConfederaciÃ³n Panamericana de Billar (CPB) at the request of the United States Billiard Association (USBA).

The tournament will be held from November 21 to 23 at the Kasumi Plaza Hall in Tokyo.  The host country will be represented by several players, including Orie Hida, the reigning women’s world championship. Hida faces a stiff challenge in Therese Klompenhouwer from Holland, who many consider to be the best in the world.  At the Carom CafÃ© women’s tournament in July 2011, Klompenhouwer bested Hida 30 to 29 on her way to winning the tournament.  Park finished 6th at that event.

Park’s selection is a story unto itself.  Late on a Tuesday night, Gaku Nishio, the president of the Asian Carom Billiard Confederation (ACBC) telephoned Michael Kang, the owner of Carom CafÃ© in New York, Nishio’s English was not the best, but Kang found a Japanese interpreter in his room.  The ACBC President’s request was urgent: he needed to round out the field of 16 and wanted someone from the USBA, but he had to know within 18 hours.  Kang called Andy Janquitto, the President of the USBA, and the two started making late-night calls to find a player who was willing and able to travel over the Thanksgiving Holiday.  They also had to obtain approval from the CPB and then the UMB.  Mercedes Gonzalez, the reigning USA women’s champion was not able to travel, but Park said she was ready, willing and able.  A half-a dozen telephone calls, faxes and emails later, Janquitto had obtained authorization from both the CPB and the UMB, and Park was officially entered into the tournament.

“Ester will be a great representative of the United States and the USBA,” Janquitto said.  “She’s a tough competitor.  She played in the 2008 World Championship, and that international experience is invaluable.  We wish her the best.”  Janquitto also thanked Gaku Nishio for thinking of the USBA, and recognized the President of the CPB, Carlos Rivera, and the President of the UMB, Jean-Claude Dupont, for acting quickly to authorize Park’s participation.  “I also need to thank Michael Kang for his efforts in assisting the USBA in locating a player.”

Accompanying Park on her trip as a USBA ambassador will be Charles Brown, who most recently was the Tournament Director for the 2012 USBA 3-Cushion National Championship.  A special thank you goes out to those who have contributed financially to make Park’s trip possible: the USBA, David Levine, Paul Frankel, Ralph Rubin and USBA directors: Andy Janquitto, Jim Shovak, Raye Raskin and Merrill Hughes.

For the player’s list and other tournament information, go to www.UMB.org under the Calendar page.