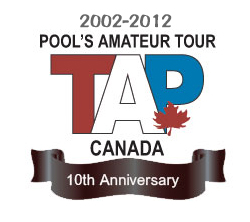 If you walk into any pool hall in Guelph, Ontario chances are you’ll meet someone who plays TAP. The birthplace of TAP Canada, Tony’s Billiards in downtown Guelph is abuzz several nights a week with players  stroking, pocketing, spinning and stunning. There are miscues and scratches, carems and combos, and high-fives with a banked 8-ball. The fun is infectious.

Celebrating its 10th Anniversary this September, TAP Canada has really grown up. When it first launched that September back in 2002, there were only 9 teams. Today, the league has grown to130 teams and over 1000 members, stretching from Guelph into Kitchener-Waterloo, Burlington, Mississauga, Toronto, Scarborough, Sudbury and Airdrie (Alberta).

“We credit our success to rewarding our players. No other league gives as much back to the player as TAP,” explained Williamson. “Winnings – in cash and prizes – come from the league fees players pay each week. Since 2002, we’ve awarded our players almost $750,000.  As a percentage of fees, that’s huge. We’ve already given away $100,000 so far this year. The other leagues don’t even come close.”

But TAP is more than just a competitive pool league with great prizes. At its heart, it’s a community of people who come to know one another well, develop strong ties and loyalty, and form deep friendships.

Katherine Deveau, league Operator and web designer , has been with TAP Canada since day one. “Some of my best friendships were made on these tables. My closest friends, my husband, my kids…they all play TAP.”

Deveau insists it’s the players who make the league so special. “Some of the best pool players around play TAP. At the same time, we  have new players who have never picked up a cue before. The veterans teach the new ones and that’s how the league grows. It’s amazing to watch a new player blossom like that. No matter what your skill level when you start playing with TAP, you’re going to get better. And you’ll make a friend or two along the way.”

So what’s next for TAP Canada? “In May 2013, we’ll be hosting our first annual TAP Provincial Classic, with total prizes exceeding $75,000,” says Williamson, proudly. “We expect over 100 teams – 8 ball and 9 ball – to attend. This will be the largest pool tournament in Canada. All of us on the TAP Canada team are very excited!”

“We owe a huge thank you to all of our players, past and present. Their dedication, their input, their competitiveness has made us who we are today. We promise to make the next ten years even better!”

For more information or to start playing in TAP Canada, please visit www.tapleague.ca  or find us on Facebook at /TAPCanada.

We look forward to playing with you!