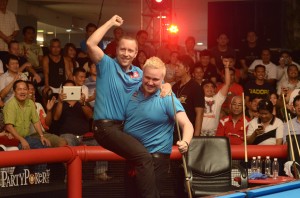 FINLAND are the 2012 PartyPoker.net World Cup of Pool champions as they put paid to the dreams of Poland, winning 10-8 in a tight final in front of a packed crowd in Manila. It was blend of youth and experience as 39 year-old Mika Immonen, who has operated at the highest level for the past 15 years, paired up with 24 year-old Petri Makkonen to deliver the goods time and again.

Their efforts won them the trophy, gold medals, a cheque for $60,000 and more importantly the title of World Cup of Pool Champions. However, the Polish pair of Karol Skowerski and Wojciech Szewcyk were magnificent throughout the competition but came up just short in the closing stages of the championship match.

We were down 4-0 to the Koreans and got over that hurdle. Then we beat the champions Germany. Then we beat the Philippines and that was an immense hurdle and a lot of pressure. And another champion pair in the USA. Coming from that route, I feel that we really deserve this,” said Mika Immonen

“It feels absolutely great. It hasn’t sunk in yet, it will later. I can’t describe it. Every match before, Mika shot the last 9 ball. But this game I shot the last 9 and that was great. That was the greatest moment of my career,” said an awestruck Makkonen.

The match was always close with the scores progressing from 3-3 to 5-5 to 7-7 and then 8-8. With the situation finely poised there was drama in what was the penultimate rack. Makkonen scratched playing a difficult jump shot and the Poles cleared to the 6 ball as a bad position forced Szewczyk into a difficult shot down the rail. The 6 hit the knuckle and the Finns cleared to move within one of the title.

Finland was breaking for the match but the Polish pair made it back to the table after Immonen missed a tricky one on the 2 ball. Poland got down to four balls before Szewczyk missed a makeable cut in the side pocket to hand the table to Finland and it was Makkonen whose lowly #35 ranking on the Euro Tour belies his immense potential, who nailed the winning 9 ball.

Both teams paths to the final were epic. Finland had beaten Korea and then looked impressive in dumping out defending champions Germany. Their quarter-final win was a real glory job against 06 and 10 champions Efren Reyes and Francisco Bustamante before beating 08 winners Shane Van Boening and Rodney Morris (USA).

Poland on the other hand, opened their account with hard fought two rack win over Australia and followed that up by beating fancied Holland in the last 16 by the same margin. Their quarter-final match was an all-European affair versus Italy and then they ousted Chinese Taipei in the semi-finals.

Immonen said, “I’m completely spent right now. We put everything we had into this match. It was a high quality final and it was the toughest match we had. We were hanging by the skin of our teeth; the rolls were against us all night. But we came with the tough shots. We both made some terrific long shots. Our decision making was good too and they missed a few opportunities.”
“Last year we got knocked out in the first round. This time we got in a lot more practice. We were more in tune with each other. We had a common goal. I told Petri if I tell you something just trust it, and that can take the pressure off you. He’s a great shot maker and he took the pressure so well. Now he can say that he’s been there and done that.”
“Poland was terrific, they are great shot makers, and they broke really well. Somehow in the end it went our way. All the credit goes to the Polish guys who are really great players, great guys.”

Makkonen was thrilled with his achievement, the biggest of his career by a long chalk.
“We were down a few times in the tournament and we fought back every time, so I knew we could do it. It’s short races and it’s 9-ball and anything can happen and playing with Mika helps.”
“The pressure gets easier after every game. After we beat the Philippines we can’t be nervous and after that it got easier.”

The Poles were stoical in defeat having far surpassed their expectations.

Almost. What a shame. We had a lot of chances and I think we played quite nervous at the end of the match. I missed a 6 ball, he missed a 6 ball. Up until then we played fantastic but that is pool; it’s a lot of pressure, said Skowerski.
“I’m not too disappointed. It was close, but I’m not going to cry. We made something special. We created history in Polish pool.”
19 year-old Szewcyk said “I don’t want to be unthankful but I do regret. I feel disappointed but also a great pride of course. We had a chance and it was our mistake that decided it, not a run out from Finland.”
“I think this tournament gave me so much experience that I couldn’t earn anywhere else. There’s no tournament where the pressure is bigger than here. The sad thing is that the adventure is over.”

The 2012 PARTYPOKER.NET World Cup of Pool is sponsored by PartyPoker.net, the world’s leading online poker school. Cloth is supplied by Iwan Simonis, Super Aramith balls by Saluc, tables by Diamond Billiards and the Official Cue is Predator.

Get all the latest updates on the 2012 World Cup of Pool on our Facebook Page at:

For complete up to date brackets go this link: http://www.matchroompool.com/page/WorldCupofPool/Results/0,,12660,00.html

Notes: Matchroom Sport are one of the worlds leading producers of televised sport and are responsible for over 1,000 hours of original programming across a range of sports. Based in the UK and chaired by charismatic founder Barry Hearn, the World Cup of Pool is one of a stable of pool events that include the World Pool Masters and the Mosconi Cup.