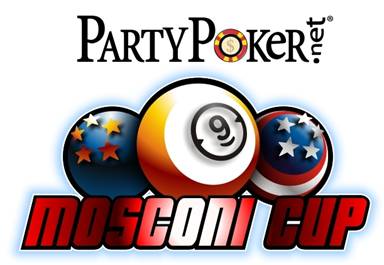 FOLLOWING THE conclusion of the German Open at Brandenburg on the Euro Tour, the top five players on the 2012 PartyPoker.com Mosconi Cup rankings stay the same with World 9 Ball Champion Darren Appleton top of the pile, closely followed by Nick Van den Berg.

Filling up the next three spots are veteran Oliver Ortmann who is looking to make his ninth Mosconi Cup appearance and first since 2004, Greece$B!G(Js Nikos Ekonomopoulos, who has come out of nowhere in his breakthrough season, and England$B!G(Js Chris Melling, an impressive Mosconi winner last December.

There are still plenty of players in contention for the five team places but big guns like Ralf Souquet and Niels Feijen will have to pull out all the stops if they are to give themselves a chance.

Only players finishing in the last 32 of each event will be allocated points and at the conclusion, after the 2012 US Open, the top two players will automatically gain entry to the Mosconi Cup side.

The remaining three players will be Matchroom Sport wildcard picks although the ranking will play a part in this.

There are just two events left on the roster of ranking events. They are the North Cyprus Open (18-20 October) and finally the US Open 9 Ball Championship which runs from 20-27 October.

Notes: Matchroom Sport are one of the world$B!G(Js leading producers of televised sport and are responsible for over 1,000 hours of original programming across a range of sports. Based in the UK and chaired by charismatic founder Barry Hearn, the Mosconi Cup is one of a stable of pool events that include the World Cup of Pool and the World Pool Masters.

All Matchroom Sport events will be played on tables supplied by Diamond Billiard Products, the cloth is by Simonis, balls are provided by Aramith and the Official Cue is Predator.