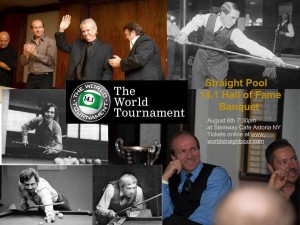 “Every year the Straight Pool Hall of Fame sells out with over a hundred people attending. It’s a classy, entertaining, and emotional celebration of the greats of the sport”, says Cindy Lee, CEO of Dragon Promotions.

The Straight Pool Hall of Fame Induction videos will be produced by www.NYCGrind.com and www.GothamCityTechnologies.com .  The Hall of Fame ceremonies will be streamed online for free on Ustream by Upstate Al of AZBtv.

To vote, please send in your choice at worldstraightpoolchampionships@gmail.com . This year’s nominees on the ballot include:

Hopkins created and still produces the Super Billiards Expo for the past 20+ years.”¨”¨Lou Butera- (born 1937 in Pittston, Pennsylvania) , Butera won the 1973 World 14.1 Championship defeating legendary Irving Crane, as well as runner-up in the World 14.1 in 1972. His nickname, “Machine Gun Lou”, derives from his stunning the crowd and fellow competitors by running 150-and-out in straight pool in 21 minutes against Allen Hopkins in 1973. He gained exposure to the masses in 1981 and 1982 when he appeared in network trick shot competitions on CBS and ABC.”¨”¨Nick Varner – Born 1948 n May 15, in Owensboro, Kentucky – Varner gained notoriety on the professional pool scene after he won two ACU-I Intercollegiate Championships while attending Purdue University. A clichÃ© given to Varner was “Speak softly and carry a big stick” because of the way he conducted himself as well as his competitive endeavors. In 1989, Varner became only the second man to earn over $100,000 in prize winnings accumulating 16 major nine-ball events and was “Player of the Year” in 1980 and 1989. “¨”¨UNSUNG HEROES:”¨Frank “Sailor” Stellman – From Racine, Wisconsin born in 1927. Legend in the midwest, taught and influenced many 14.1 players and groomed over a dozen 100 ball runners. Organized Wisconsin’s first state 9-Ball tournaments for men and women; He was the technical host for a weekly TV pool show. He has given numerous pool seminars usually free of charge. Frank’s second year on the 14.1 HOF ballot”¨”¨Tom Jennings,- A mathematics professor, Jennings was still able to find time to play pro calibre pool and in 1976 and 1977, he won back-to-back US Open 14.1 Pocket Billiards Championships, being the first player since Steve Mizerak to win consecutive championships. He won both titles while also a full-time mathematics professor at Middlesex County College in New Jersey.

Fans can buy tickets in advance for $55 by going to http://worldstraightpool.com/tickets.html  . The dinner includes a 5 course meal and beverages as well as seating next to the stars of billiards. For $141 you can also join the Elite Members of the 141 Club on the same link.