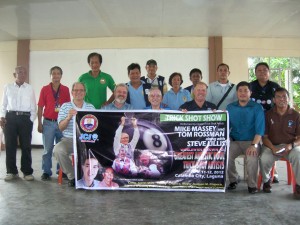 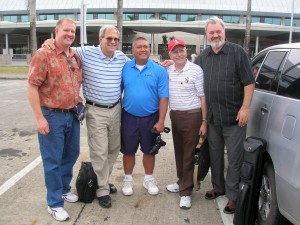 Mike Massey, Tom “Dr. Cue” Rossman, and Steve Lillis embarked on a 27 day trip to the Philippines to perform a series of Gospel Trick Shot Shows sponsored by the billiard industry both here in the USA and in the Philippines with various Christian ministries participating as well.  First stop was Manila with pro Filipino players Francisco Bustamante, Dennis Orcollo, and Marlon Manalo helping to provide venues, pool tables, and other accommodations and help.  Mike, Tom, and Steve were honored guests at the Filipino Independence Day celebrations in Manila on June 11 and 12.  After meeting with various mayors, congressmen, and other officials, Gospel Trick Shot Shows were performed with students being dismissed from school early to attend.  Other shows were done in the Manila area in various shopping malls, upscale pool rooms, gymnasiums, community centers, and campgrounds. 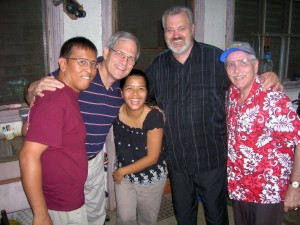 Next stop was the Island of Bacolod were Mike, Tom, and Steve met with public officials from much smaller towns than Manila before performing more Gospel Trick Shot Shows.  In one particular town 250 people jammed into a local 5 table pool room to see the show.  Fellowship of Christian Athletes (FCA) a U.S. based ministry with a presence in the Philippines help to provide various contacts and venues.  Churches, community centers, pool rooms, and universities were the site of the shows on the Island of Bacolod.  It was on this leg of the journey that both Steve and Tom got sick for a few days each with stomach viruses and dehydration as Mike soldiered on living up to his famous nickname of “Tennessee Tarzan”.  Thank God! 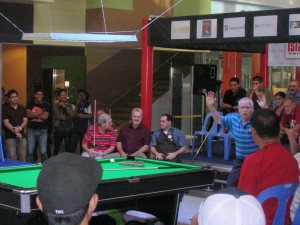 The third and final leg of the journey came on the Island of Cebu where the tour was picking up a head of steam.  Already the team had been on television twice and now a press conference with 12 members of the media awaited them in this fastest growing cosmopolitan area in the Philippines called Cebu City.  Newspaper articles and two more television appearances took place.  The shows were scheduled and located in an upscale mall in Cebu City and their was plenty of help on hand.  Some of the local Christian businessmen partnered with the team to help with various costs and amenities.  ESPN Asia and Puyat Sports made their way down from Manila by flying in a pool table mechanic complete with pool table and an ESPN representative to stay for most of the entire week to help pull off a series of shows in this upscale mall called the J Center Mall. 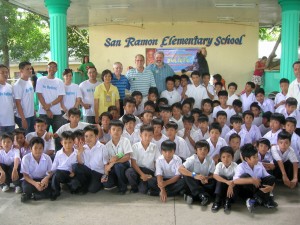 One of the ministries partnering with GTS took the team to “Garbage City” to see where the poorest of the poor live.   GTS is working on a future partnership with this ministry to help remember the poor in some practical ways. The team was treated at the end of the trip to a weekend vacation out on the ocean at a seaside resort in Cebu where they took in a Sunday morning service and handed out the remainder of the 1,300 salvation bracelets that we brought from the U.S.A.  And yes another GTS show was on tap as Sunday afternoon the team decided to go down the street from the church and do yet another Gospel Trick Shot Show for the locals and this time it was in a small chicken coup that was converted into a one table pool room.  Forty-five people jammed in from the neighborhood to see what was going on.  The Gospel Trick Shot team even found a few more salvation bracelets and then took others off their wrists to give the people a free gift reminder as the bracelet corresponds to a specific Gospel Trick Shot better know as the smiley face.