IN A LEGENDARY EPIC THRILLER, DARREN “DYNAMITE” APPLETON WINS THE WORLD 9-BALL CHAMPIONSHIP WITH A 13-12 VICTORY OVER LEE HE WEN

IT’S DYANMITE IN DOHA!
IN A LEGENDARY EPIC THRILLER, DARREN “DYNAMITE” APPLETON WINS THE WORLD 9-BALL CHAMPIONSHIP WITH A 13-12 VICTORY OVER LEE HE WEN

(Doha, Qatar)–In one of the most thrilling and surreal finals ever witnessed in pool history, England’s Darren Appleton won the 2012 World 9-ball Championship, barely beating China’s Lee He Wen, 13-12 in front of hundreds of stunned fans inside Doha’s Al Sadd Sports Club. 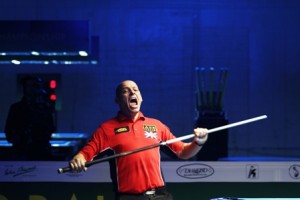 Photos courtesy Vinod DivaKaran, Doha Stadium Sports Weekly
It was a match that had everything that the sport of pool could possibly offer; fantastic, clutch shot making, an unbelievably impossible comeback, edge of your seat drama that was downright unbearable, and a finish that blew the roof off the house.

For Appleton, the win is his first World 9-ball Championship and is the culmination of a dream he has held since turning to pool from English 8-ball in the mid-2000’s.  With his World 10-ball crown in 2009, his double US Opens in 2010 and 2011, and now the World 9-ball Championship, Appleton can certainly lay claim to be one of the greats of all time.

For Lee, he came within a whisker of nearly pulling off a comeback for the ages, and at the same time, earned for himself the admiration of legions of pool fans around the world who were in awe at the 31 year old’s tenacity and never-say-die spirit.

What’s more striking for Lee is that midway through the match he was nothing more than an afterthought to a sure coronation for Appleton. Lee, who had beaten Ralf Souquet in the semis, was absolutely and thoroughly written off by every single person who was watching in person or following the match online streamed over the Al Kass Sports channel.

That’s because after handily taking down Japan’s Naoyuki Ohi in the semi-final, Appleton raced out of the starting gates in the race to 13, alternate break final and was streaking towards a total rout on the way to the title.

After splitting the first four racks, Appleton caught the type of gear every single pro player dreams about when they wonder how they would hope to play in a championship final.  He had several break and run outs, he punished every mistake Lee made, and as he piled up the racks and his lead grew ever wider, he literally oozed confidence.

Clearly in that rarefied zone that’s only reserved for the great champions, Appleton soon found himself out in front 9-2. Lee got one rack back to make it 9-3, but that didn’t deter the Englishman as a break and run and a clear off a scratch by the Chinese pushed the score to 11-3. 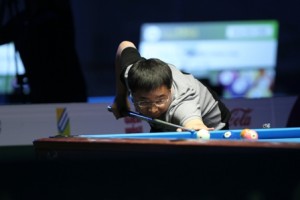 At this point, the score line and the body language of both players told the whole story; the match was surely over and it was just a formality of going through the last few motions before Appleton would be lifting the trophy.  It was such a sure thing that Appleton’s fans on Facebook took to congratulating “Darren Appleton, the new World 9-ball Champion.”

When Lee grabbed the next rack to make the score 11-4, nobody even thought anything of it. When Appleton failed to convert off a foul by Lee in the next rack, and even scratched to help get Lee to 11-6, it still didn’t mean anything to anyone.  Indeed Appleton, for all intents and purposes, put the match away in the next rack when he cleared the colors after Lee left a safety open, and moved to within one of the world title.

But then, with Appleton leading 12-6, that moment came, that mysterious turning point where the balls, seemingly impregnated with a mind of their own, had had enough of catering to the Englishman’s every whim, and abandoned him like the plague.

It happened when after breaking in rack 19, Appleton had a wide open layout to the finish line and the world championship.  But with just four easy balls left, he  inexplicably snookered himself. Appleton was forced to play safe but a counter safe led to a foul and another rack for Lee.

From there on, everything went Lee’s way, while Appleton couldn’t buy a piece of fortune. Appleton blew a push out and Lee cleared to make it 12-8.  Appleton left a safety open and Lee cleared again. Then Lee broke and ran to make the score 12-10.

Having come back from sure defeat, Lee was suddenly  in freewheeling mode, playing without a care in the world. Appleton, on the other hand, looked like he was bearing the weight of several worlds squarely on his shoulders.  And it would only get worse.

Lee moved to within one at 12-11 when Appleton tried to jump but missed and left the shot on, allowing Lee to run out. With the drama building to a massive crescendo, Lee then coolly stepped up in the next game and broke and ran. After 24 racks, the World Championship was to be decided by one single frame.

With the crowd in a state of disbelief, and the tension in the arena at the boiling point, a shell shocked Appleton, who had only moments prior been waltzing his way to the world title,  gamely stood up to give it one last go.

He got a ball down and could see the one ball, which he pocketed.  But the 2-ball was unavailable and he played a safety. Lee then played a counter safety.  Appleton then pulled out his jump stick and proceeded to make history; he jumped the cue ball over the blocking ball and potted the 2-ball at a fairly sharp angle straight into the side pocket.

The crowd erupted as a suddenly rejuvenated Appleton grabbed his cue and then picked off the remaining colors.  As the 8-ball fell and left the Englishman with an elementary shot on the championship ball, Appleton let out a shout and pumped his fist. Then as the 9-ball fell Appleton roared like a proud lion. Impulsively he jumped up on the pool table with his arms and cue held high, then pumped his fists and shouted, then  jumped down from the table and threw his stick onto the ground in pure joy and relief as the crowd lustily cheered him on.

After taking in the cheers, the hugs and congratulations from well wishers, Appleton tried to figure out what had just happened.

“At 11-3 down I lost my focus,” Appleton said. “That’s because I had played so good up to that point. I was anxious to get it over with. And I’m thinking, I can’t lose, he needs a miracle.  At 12-6 I was sure it was over because I had the easiest clearance you could ever have. But I snookered myself because I had too much adrenalin. Then after that, nothing happened for me. Around 12-10 I started feeling the heat.”

For Lee he had figured the match was over when he was down 11-3 and he never considered he could come back until a few racks later, when he started to notice Appleton getting concerned.

“At first I didn’t think I could catch up,” Lee said through an interpreter. “Then at 12-6 I started to play well because it was like I had already lost the match so I was relaxed. When I started to get close to him I could feel that he was nervous and then I started to get excited, thinking I can win.”

But while Lee nearly  made a miracle comeback, it was Appleton who  pulled off the miracle win, at the very last chance, in the biggest match of his life.

“If I’d have lost that match I would have jumped off a bridge,” Appleton said. “But I played the best rack of my life that last rack. Incredible. I can’t believe what just happened.”

*The World Pool And Billiard Association(WPA) is the international governing body of the sport of pocket billiards.