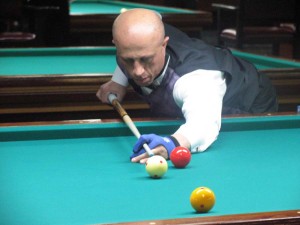 Besides being a perennial champion with 93 victories in USBA events, Mazin is a superb teacher of the game and a real showman. In his clinic he emphasized stroke fundamentals and shot selection, and concluded with a unique and effective short-rail- first system that he developed himself.  He began the evening exhibition by demonstrating a wide variety of shots, explaining the mechanics involved and receiving frequent and well-deserved applause as the shots became more and more difficult and he nailed one after another with ease and finesse. His passion for the game and the excitement he generates for it are extraordinary. The exhibition concluded with a very well-played 15 point game between Mazin and the valiant Juan Reyes. Dave Matlock had been scheduled to play a longer exhibition game with Mazin but had to bow out due to a death in his family.

Mazin is as gracious a person as he is a phenomenal player and supporter of the game, and he proved to be all three throughout his visit to the Kansas City area.