Day One Update from the Diamond Open 10 Ball event at Super Billiards Expo.

Day One Update from the Diamond Open 10 Ball event at Super Billiards Expo.

The event started with 68 top players.  The event is double elimination race to 10. Day one saw the following top ranked players go to the one loss side, Johnny Archer, Earl Strickland and Shane Van Boening.  But the big move from day one to day two is not the players but a cue ball change. Day one saw the use of the Red Dot cue ball. Some players were expecting the Measles ball and felt the Red Dot was playing different.  Both cue balls are from Aramith the Red Dot has a small red dot and the Measles ball also known as the Pro Cup or TV cue ball has 6 larger red dots. So day two the Pro event is using the Measles ball but from talking to players not all are aware of the change. More to come later. 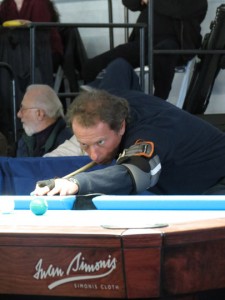