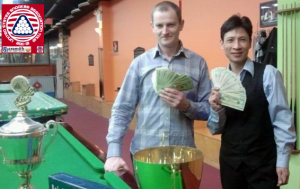 Paul Carbin has repeated the United States Snooker Association (USSA) Tour success he had last season at the Prince Snooker Club in Brooklyn, New York, as he captured Event 8 on the 2012 USSA National Tour, sponsored by Aramith Billiard Balls.

Raymond Fung has been dominating this season’s previous USSA Tour events played in the New York City area in Carbin’s absence, but this time the former United States National Snooker Championship runner-up lost out 4-1 to Carbin on Paul’s first appearance this season in what was a very hard fought out semifinal.

Carbin, who honed his considerable snooker skills back in his native Ireland, again produced some fine form to win his group and to produce a 3-0 quarterfinal win over Chong Keng Sim, which included a break of 52, before then going into battle with Fung.

Fung booked his place in the semifinals with a 3-1 quarterfinal win over Juno Chen, though went 2-0 behind Carbin after two close initial frames, with the Irishman producing a break of 52 in frame two.

Fung reduced his arrears after he claimed the third frame which went down to the wire. Carbin though was soon 3-1 up assisted by a run of 56, and despite Fung stroking in a break of 55 in frame five it proved insufficient for him as Carbin won the match on the final black ball.

In the final Carbin matched up against Yan Y. Zhen, who reached the semifinals of last year’s United States National Snooker Championship at the Prince Snooker Club.

Yan had finished top of his group and then went onto have an easy 3-0 victory in the quarterfinals over Leo Li, and then proceeded to defeat Tim Lee 4-1 in the semifinals, which included a break of 48 in frame four.

Carbin though proved far too tough for Yan in the final as he easily won the first two frames 71-31 and 61-28 respectively. Frame three was slightly closer as it went down to the final colors 55-34.

In the fourth frame Carbin fluked his initial red after attempting a combination shot, which scattered the reds into a frame winning opportunity, of which he took full advantage of by running a break of 82 to clinch the frame for a 4-0 final victory.