WPBA Tour Championship Final Four!
Kim vs. Villarreal and Lee vs. Fisher in next round’s semifinal action
LINCOLN CITY, OR – After three days of stellar play, the 48 player WPBA Tour Championships have been whittled down to the best four 9-Ball players this week at Chinook Winds Event Center. Semi final #1 between Ga Young Kim and the “Texas Tornado” Vivian Villarreal will take place in front of the ESPN cameras at 1:00 p.m. Semi final #2 will feature Jeanette Lee vs. Allison Fisher at 3:00 p.m. And the championship will conclude with the final match at 5:00 p.m. 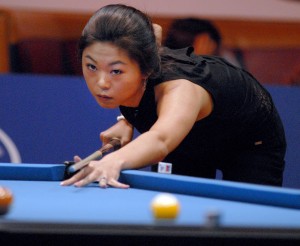 Then it was a battle between friends Helena Thornfeldt of Sweden, and USA’s best-known player, the “Black Widow” Jeanette Lee, where Lee got the best of Thornfeldt in a squeaker 7-6 victory.

In the final quarterfinal match of the day, legendary British born Allison Fisher, a BCA Hall of Famer and winner of more career titles than any player (male or female) in history, faced off against New York’s finest — Jennifer Barretta. In another close match, Fisher emerged the victor, 7-5.

Fans can keep up with match results at www.wpba.com via the Tour Championship Tournament Board.

LINCOLN CITY, OR – The Women’s Pro Billiard Tour kicked off its culminating season Tour Championship at the Chinook Winds Event Center with 48 of the best women pool players in the world competing throughout Thursday.

32 competitors completed first round matches in the day session; the 16 winners of those matches then had to face the top 16 seeded players in the event. The big upset of this round was Texas player and Lone Star regional tour promoter Kim White’s victory over defending champion Xiaoting Pan of China in a 9-8 thriller for USA fans!

All first round losers moved to the one loss side of the double elimination chart — if they are defeated again, they are eliminated from the tournament. Elimination results will post later today. Beginning Saturday morning, quarter final, semi final and final matches will be taped by ESPN for seven one-hour national broadcasts. Here are the Round One Results:

Fans can keep up with match results at www.wpba.com via the Tour Championship Tournament Board.

About the Women’s Professional Billiard Association (WPBA)
The WPBA was established in 1976 as the Women’s Professional Billiard Alliance, and celebrates its 35th anniversary in 2011 as the oldest pro player organization in the sport. The WPBA sanctions and produces the Women’s Pro Billiard Tour, which features ESPN-televised events with the world’s greatest women players. Visit www.wpba.com for more. The WPBA Classic Tour is sponsored by the American Poolplayers Association, Diamond Billiards, Iwan Simonis, Delta 13, Pooldawg and Aramith.