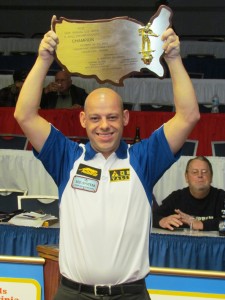 The final day of the 36th Annual U.S. Open 9-Ball Championships concluded with a flawless performance by the explosive British player “Dynamite” Darren Appleton. He defeated Shawn Putnam in a single-set finals match with a convincing score of 13-6. Appleton is the third player in U.S. Open 9-Ball history to claim back to back titles since Mika Immonen in 2008/2009 and Nick Varner in 1989/1990.

This year, 251 players representing over 30 countries arrived to vie for the most prestigious professional billiard title on U.S. soil. Only four entered the final day where each match would now be a win-by-two format that never came into play.

The determined Brit entered the Accu-stats TV arena for his finals match sporting his patriotic England shirt with his country’s bold name and logo on the back. He had already defeated Putnam once in the first round of the finals bracket and felt confident he could do it again.

The first of only two errors by Appleton came in rack seven. While up 6-0, he scratched while playing one-rail position from the 3 to the 4 ball allowing Putnam a chance to move his first bead. He would claim that rack and two more bringing the score to 6-3 when the American fans began chanting, “USA! USA!” Putnam cracked a smirk but the cue ball found a way to the pocket on his following break.

Appleton continued his lead throughout the match keeping the cue ball on a very short leash. His patterns were simple, his speed was precise, and his pocketing was deadly. While ahead 11-5, Appleton finally missed a thin cut on the 3 ball that sold out the rack. Putnam ran a few balls but found he was cold from the chair. He missed the 7 ball in the corner but it banked in the side two rails. He did get out but broke and scratched in the following rack. Appleton ran that rack, then broke and ran the final rack for the match and title.

Putnam earned his second place finish defeating a number of world class players including Mosconi Cup MVP Dennis Hatch 11-2. Putnam appeared unstoppable, running the first four racks and jumping to an 8-0 lead before Hatch even won a game. The two friends bantered and even exchanged a fist pump when

Hatch played a lock up safety on the 6 ball while down 8-1. Ultimately, Hatch was unable to capitalize on the rare opportunities he received and at 10-2, when Putnam got perfect on the 6 ball with four balls left on the table, he threw in the towel.

Putnam continued his tear in his next match against “The Lion” Alex Pagulayan who made a few uncharacteristic mental errors.

Pagulayan received his first loss from Appleton in winner-side finals match. Both players stayed at each other’s heels until Appleton was ahead 7-6. In that rack, Appleton missed a 2 ball displaying the first possible signs of a slight mechanical breakdown. The gentlemen exchanged a few safeties until Pagulayan finally had an offensive shot at the 3 ball. As he shot it a cell phone went off in the top row leaving him with a tricky shot on the 4 ball. “I told you, only when he shoots,” said the playful lion. After much pondering, Pagulayan swung and missed the 4 in the corner. He would never regain control of the table again after that. Appleton’s break was too effective and consistent and would ultimately earn him the grand prize.