The Jump Shot BY BYRNES 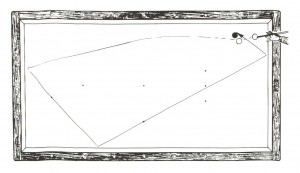 The jump shot in pool has become a popular weapon among today’s top players in recent years. Opportunities for jump shots also come up in three-cushion billiards, but not nearly as often. Billiard jump shots are more often used in exhibitions than in games-still, there are a few positions where they are practical, especially for the aggressive players.

The way I understand the rules now, jump shots are legal provided no ball touches the wooden part of the rail; a ball riding along the top of the cushion before falling back onto the table is okay.

In executing jump shots, the cue must be elevated. How high depends on how high you want the cueball to rise (45degrees is about the limit; more than that and it is too hard to aim and stroke). Speed also varies with the amount of jump neede, but most jump shots must be hit with considerable authority. You can apply right and left English and backspin to the cueball on a jump shot, but forget about topspin because the tip will interfere with the ball’s effort to leave the cloth.

The jump shot in diagram may well be the best choice under the circumstances. There are several other shots to consider, but they can be made tougher with a slight change in the placement of the balls. Shooting down on the cueball with enough power to make it jump over the red gives you a good chance of scoring.  Some left English is needed in the given position, and the resulting masse effect is shown by the curve in the cueball’s path on its way to the first rail.