Phoenix TAP Announces “Player of the Year” for 2011 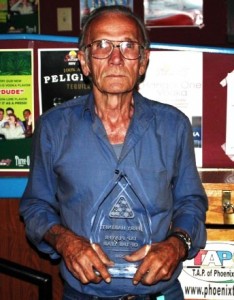 There are times when a specific player makes such tremendous contributions to the game of pool and the billiard community, that they deserve a special award.  That is why Phoenix TAP, which has served the Phoenix area for the past nine years, is taking this opportunity to give its, first ever, “Player of the year” award to Jerry Hartnett.

Jerry, a veteran of the Vietnam War, has played pool for over 55 years and commands the table when he’s playing his match.  He plays in the Phoenix TAP League three nights a week and supports his team with superior pool playing.  With all of those years of experience under his belt, he is also an excellent coaching resource.  There isn’t a shot on the table that Jerry hasn’t seen or attempted to master.

In addition to his pool-playing abilities, Jerry is skilled in woodworking and personally designed one-of-a-kind cues for his cue collection and a wooden “coffin” case that is so impressive that you can’t help but notice it when he walks in the room. These skills carried over when he funded, designed and built the, much needed, tables for the seating area in the pool room at Skip & Jan’s in Tempe, AZ.  Mind you, these aren’t your everyday-type tables – he thought of everything – underneath each table there are half-circle cutouts to set your case and a shelf for the ladies to set their purses.  This leaves the top of the table for food and drinks while you play a match.

But, wait”¦there’s more”¦Thanks to Jerry, all of the twelve 9′ tables at Skip & Jan’s are back in tip-top shape – the best they’ve ever been – and there are enough bar stools for everyone to have a seat, especially during league night and tournaments.  Jerry spent a considerable amount of money and time assisting the table reconstruction crew to make sure everything was perfect.

Because of his determination, talent, experience and love of the game, Jerry Hartnett has made playing pool in the Phoenix TAP League more exciting than ever.  We appreciate Jerry’s commitment to the billiard industry and his dedication to the league.  Thank you!