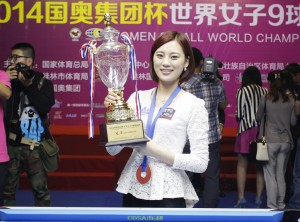 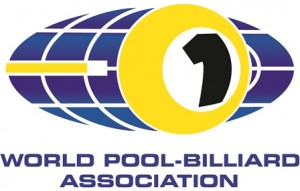 (Guilin, China)–Lui Shasha did it again.

Not only did the diminutive and feisty 21 year old win her second WPA Women’s World 9-ball Championship tonight, but it was the second time in the last 15 months that she defeated rival and fellow national team member Chen Siming by one rack in a major tournament final in China.

In what amounted to a repeat of the China Open final in Shanghai in June of 2013, albeit with much more riding on the line, Liu and Chen battled toe to toe in a classic for the biggest prize in women’s pool. For 90 minutes practically nothing stood between these two greats of the women’s game, until the last 20 minutes of the match when Liu, displaying the heart of a hungry lion, won the last three racks and eked out the win and the world championship, 9-8.

Liu’s amazing victory tonight made her only the fourth woman in the 23 year history of the Women’s World 9-ball Championship to win the event twice.  She first captured pool glory in 2009 at the age of just 16 years old, stunning legend Karen Corr in the northeastern Chinese city of Shenyang.

Liu’s win this time certainly had to be much more satisfying, however, as five years ago she was a freewheeling teenager who could play without a care in the world. Now, as a Chinese national team member playing under the pressure of high expectation, and the intense glare of the massive Chinese media spotlight, the 21 year old Liu can finally say she has conquered the world and officially arrived at the mountain top of women’s pool.

For the massively talented Chen, the loss proved a bitter disappointment as she had Liu on the ropes right up until the end. The 20 year old Chen has now lost twice in the World Championship final, the first time in 2011 when, as a 17 year old, she went down in flames against fellow Chinese Bi Zhu Qing.  Chen was more than up to the task this time, however, and the fact that she couldn’t close out the match had nothing to do with any poor play. The balls at the end simply didn’t give her anything to look at, and Liu executed some memorable shots right when it counted.

The fact that the final was played at such a high level was not surprising considering how well both players had been playing in the lead up. The day began with the two semi-finals which were played consecutively at a specially built TV arena inside Guilin’s Dream City development.

In the first race to 9 semi-final, Liu squared off with two time world champion Ga Young Kim of Korea. The match was even early before Liu turned up the heat and led 7-4. But just when Liu was ready to move to the hill, she missed a straight in 9-ball. Within minutes Kim had stormed back to tie and was about to move to the hill herself when she missed her own 9-ball. Liu took that rack then broke and ran for the hard nose 9-7 win.

In the second semi-final Chen faced Taiwanese veteran Tan Ho Yun. Chen looked like she was going to run away early as she went up 4-0, then 5-1. Tan clawed back to tie the match at 5-5. Chen, however, then put on a brilliant display of potting and cue ball control, and won going away, 9-5.

The final, which began an hour later at 5:30pm, swayed back and forth from the very first rack, with both players punishing mistakes by the other, and displaying world class cueing and safety prowess. The pair were tied at scores of 1, 2, 3, and 4.

At 4-4  Chen left a safety try open and the steady, reliable and tenacious shot making by Liu put her up by 1 at 5-4. Chen countered in the next rack, starting things off with a clutch bank on the 2- ball and a solid clear to tie the match at 5-5.  Chen made Liu pay for an errant safe in the next frame, then broke and ran the subsequent rack to now move up by two at 7-5.

With the pressure slowly building Liu broke and ran to move back within 1. But then Chen countered with one of her own to go up 8-6, and it seemed nothing could stop Chen from finally winning her first world title. 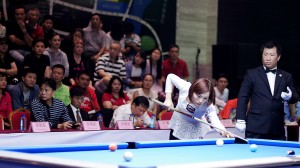 The next three racks will be ones both players will no doubt never forget,  but for completely different reasons.  With the match on the line, Liu kept the 15th frame going by potting the 2-ball via an incredibly difficult kick off the rail. She bore down and cleared the remaining colors to make the score 8-7.

Chen missed a difficult cut in the next frame and Liu stood up and, with a steely demeanor, ran the rack. The World Championship had come down to a one game,  sudden death decider with Liu breaking.

Liu made three balls on the break and had a shot on the 1-ball. But she wasn’t out of the woods yet. She made a nervy 4-6 combo but was faced with a difficult cut on the 4-ball and, at the same time, an almost impossible position to the 7-ball up table.  With the pressure nearly unbearable, Liu then executed perhaps the greatest shot of her career; she hit a blind cut on the 4-ball into the corner, and sent the cue ball three rails into perfect position on the 7-ball. A few moments later Liu Shasha was the new world champion.

Afterward, Liu  was rightfully over the moon with not just the result, but how she did it. Throw in a bit of luck and she knew it was her night to shine.

“I was really nervous before the match,” the friendly Liu said. “But after a few racks, I knew I was playing better than I played all week. When I was down 8-6, I told myself just try your best to do the job. At that point I was nervous but I knew I had to stay focused and try to win the match. I was so nervous on that shot(the 4-ball in the last rack.) But there was no other way to play the shot.

“I really feel that Siming is a more skillful player than me but when we play each other, I always seem to play good. And I think that sometimes I’m just lucky and maybe she’s not lucky.” 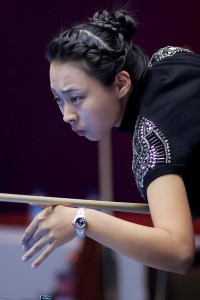 Chen put on a brave face at the awarding ceremony, but in the privacy of the VIP room with just her mother to console her, she wiped away the tears of another bitter finals loss.

“I’m very disappointed,” Chen said.  “I thought I played very well. And Shasha also played well.  In 2011 I played in the final and I didn’t play well but here I played good and it was a good match. My emotions are mixed right now. On the one hand I’m very disappointed but the only thing I can do is use this as a learning experience to try and improve.”

Everyone who watched her play this week knows that the supremely talented Chen will surely win her share of world titles in the coming years. As she doubles down on her efforts, she might want to take Liu Shasha’s words to heart.

“Winning this year is a better feeling and it’s more important than when I won in 2009,” Liu said. “Last year I was under so much pressure that I thought about quitting pool and I didn’t know if I could improve. So it’s really special that this year I won the World 9-ball Championship. I feel like I’m dreaming right now. I can’t believe I won.

“The lesson for me is that you should never give up. Never. Just do your best and good things will happen.”

**The 2014 Women’s World 9-ball was held in Guilin, China from October 13-18, and was sanctioned by the World Pool & Billiard Association(WPA), the world governing body of pool.  64 women players from across the globe competed for the biggest prize in Women’s Pool.