THE BIG BOYS BEAR DOWN

Story and Photo by Ted Lerner 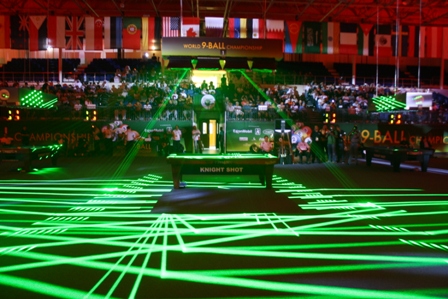 (Doha, Qatar)–Over the years pool fans have become accustomed to the opening stages of the World 9-ball championship producing major upsets, with unheralded newcomers  shocking world class players and sending them reeling over to the precarious losers side of their group brackets.  From there the top player is pushed into a do or die situation with every shot carrying the weight of shame and embarrassment if he doesn’t produce.

It could be said that part of the reason for the easy victories by pool’s elite was that the level of competition in the early stages of a 128 man field doesn’t always stack up. And it is true that perhaps more than half the field assembled in Doha has no chance at all to win pool’s most prestigious title. Perhaps only 40 to 50 players have any real chance to raise the trophy on Sunday.

But what was on display last night in the Al Sadd spoke of another kind of statement; that this year’s World 9-ball championship is for the big boys. Clearly the use of the notoriously difficult Diamond tables is proving a big advantage to the best players and will limit “incredible” upsets.  Also the newly ramped up tournament venue at the beautiful Al Sadd Sports Club, which many are saying is the finest they’ve ever seen in pool, is getting players’ adrenalin supercharged and helping to bring the best out of the best.

Before the final session of the day the Qatar Billiards and Snooker Federation held a 30 minute opening ceremony. Local dignitaries made speeches, a young man said a prayer, two young girls read a poem and then the arena was filled with a wild laser light show accompanied by music. For the finale the head of the Qatar Olympic Committee , who was seated up in the balcony, broke the ceremonial rack on Table 1 by pulling a hidden string from his perch overlooking the arena.

In what promised to be a highly competitive match,  Raj Hundal took on the Philippines Lee Van Corteza.  Hundal, who lives in London but players under the flag of India, hadn’t played in a world championship event since 2007 but looked in fine form as he sprinted past Corteza for a 9-4 win.

The group stages continue Sunday at the Al Sadd Sports Club with four sessions running throughout the day and evening. The players have been divided into  16 groups of 8, playing a double elimination format, race to 9, alternate Beak. 4 qualifiers (2 from winner’s brackets and 2 from loser’s brackets) will advance into the final round of 64 players which is single elimination, race to 11, alternate Break.  The final will be a race to 13, alternate break.

The WPA will be providing complete coverage of all the action from inside the Al Sadd Sports club throughout the tournament. Fans around the world can follow matches as they happen via our live scoring platform. The live scoring button can be seen on the front page of the WPA’s new and improved website, www.wpa-pool.com . There you can also see the brackets icon which will give you updated standings from each group and the knockout stage.

Fans can also get instant updates, insights and scores by following the WPA on Twitter.  Our Twitter user name is @poolwpa. You can go directly to our Twitter page at,  http://twitter.com/poolwpa.

In addition,  the WPA will be providing insights and analysis with articles posted several times daily on the WPA home page.

Complete results from sessions three and four on day 1 of the 2011 World 9-ball championship are below.