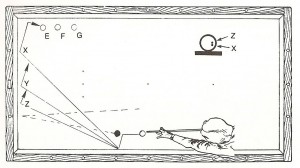 Pool players seldom have need for tremendous sidespin, but good three cushion players use it in almost every match. In fact, many pool players don’t even know how to apply it, and the question “How do you get so much spin on the ball?” is one-billiard players hear all the time. The answer to the question is simple. To make the cueball spin you not only have to hit it off center, you have to hit the object ball full in the face or very nearly so.

I’m talking English here-a tremendous amount of English. The shots I’m going to describe require the cueball to travel slowly across the cloth while at the same time spinning furiously. The only way to achieve the affect is to hit the first ball so full that almost all of the speed is removed from the cueball, leaving only the spin. Spin shots can be used to miss kisses, get position, or enlarge the target area on the third ball.

In Diagram 114, consider first the shot with E as the second object ball. If you can send the cueball to point X on the second rail with slow speed and great spin., the shot is almost impossible to miss because of the angle the cueball will take off the third rail. In planning the shot in your head, ignore the first rail and choose instead a likely spot on the second rail, keeping in mind how slowly the cueball will be traveling and how fast it will be spinning as compared to a cueball with normal running English. Be sure to hit it hard enough so the cueball is still spinning when it reaches the third rail, and keep in mine too that it is almost impossible to miss the shot “short.”