Dennis Orcullo on Top of the World.

Our final day in Fujairah began with a playoff for third place between Darren Appleton and David Alcaide. Alcaide dominated the match as Appleton only came to the table sparingly. Alcaide won 9-2.

Then it was time for the Championship match between Dennis Orcullo of the Philippines and Niels Feijen of the Netherlands. Orcullo won the lag and broke and ran the first rack. It then became the Orcullo break ad run show as repeated this performance ever and over until the score stood at 5-0. Orcullo had to play in local qualifiers to get into the tournament and he was making the most of the opportunity. When he broke the rack in game 6 he scratched in the side pocket and Feijen had his first opportunity.

Feijen polished off that rack to put his first mark on the board at 5-1 down. He then suffered a dry break but left a tough run of balls for Orcullo. Orcullo had to bank the three ball cross corner to get his run begun and then had a very tough lay of the land to navigate. He took his time surveying each shot and did a simply marvelous job of getting through the rack with one tough position after another. But he left himself long on the 8 ball and it rattled in the jaws, returning Feijen to the table. 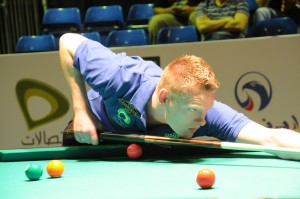 Feijen had a big problem with the 14 ball. Everything else had a pocket but the 14 was blocked from the corner by the 8 ball. He would need to slide into a narrow window between the two to play the 14 up-table, attempt a bank, or try to move the 14 with another shot. Or he could play a safe and try to get ball in hand. He chose the safe, locking Orcullo behind the 13 ball way up-table. Orcullo called the 8 in the corner and measured his kick shot. He missed the 8 ball and scratched, again awarding ball in hand to Feijen. Feijen positioned the cue between the 8 and the 12 ball which he had moved next to the 14 on his safety, made the shot and finished off the table to bring our score to 5-2.

Feijen made two balls on the next snap and had an easy layout. He very quickly made it 5-3. He was running throughout he next rack with ease when he got what appeared to be a skid on the 4 ball and it stayed up between the corner jaws. Orcullo was back at the table. He cleared up and the score became 6-3 in our race to ten games. Orcullo made a great spread of the balls on the next break and finished that rack easily to lead 7-3.

The outlook began to truly dim for Feijen when Orcullo made three balls on the next break and faced an open table of well-spread balls. It was soon 8-3 Orcullo. But Orcullo scratched in the side pocket on the break to bring some light to Feijen’s chances. But he missed a long shot to the corner early on and Orcullo finished off the balls to claim his spot on the hill.

Orcullo now stood one rack away from his first World title. He made two balls on the break but the table was not an easy one to finish off. But he made it look easy and sank the final 8 ball to a celebration of fans in the arena. FInal score 10-3.