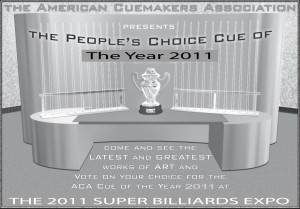 The American  Cuemakers Association (ACA) is proud to announce its latest inductee into the ACA Hall of Fame and its 2011 “Cuemaker of the Year.”  The ACA was formed in 1992 to promote the American made cue as a unique collectable art form,  to establish a standard of excellence in the art of cuemaking, to educate the public, and to work with other organizations whose objectives are compatible with those of the ACA.

Tad began repairing cues in 1963 in a pool room he owned in Los Angeles, California.   Within a year, and because of popular demand, he began making his own cues.  Although not a pool player himself, Tad had a lot of input regarding the playability of his cues from the likes of Willie Mosconi, Jimmy Caras, and Joe Balsis.  Tad was also influenced by cuemakers Harvey Martin, Ernie Gutierrez, Gene Balner, and Doc Fry, three of whom are previous inductees themselves.

Never making more than approximately 100 cues per year, Tad used very little ivory in his cues.  In 2003, after 40 years of making top quality, highly collectible cues, Tad Kohara was recognized as a “Master Cuemaker” by his peers and collectors at the “Showcase at the Ritz” in California.  Although making very few cues today, the Kohara name carries on as his son, Fred, continues the tradition started by his father.

The “Cuemaker of the Year” award was begun in 2008 to recognize an ACA member who has provided a top quality product in an ethical, honorable, and professional manner throughout the years.  The award is presented annually at the Super Billiards Expo at the Valley Forge Convention Center in King of Prussia, PA.  This year’s Expo will be held on March 10-13, with the presentations being made at the ACA banquet on Saturday, March 12.

The 2011 ACA “Cuemaker of the Year” is Keith Josey of Josey Custom Cues in Savannah, GA.  Keith grew up playing pool and woodworking in his father’s shop.  In 1988, Keith opened Josey Cue Repairs in Savannah when he became dissatisfied with local repairs.  Then in 1992, he opened Josey Custom Cues.  Known for his elaborate points and inlay designs, many Josey cues have complex floating points with a “medieval” motif.  Cue enthusiasts can spot a Josey cue from across a pool room.

Because Savannah is surrounded by many military bases and because of Keith’s penchant for perfection, his cues can be found all over the world.  Sherri Josey, Keith’s wife, handles all business transactions for Josey Custom Cues as well as accompanying Keith to events throughout the country.

Also to be recognized at the banquet will be this year’s recipient of the “Peoples Choice Award.”  This award acknowledges the public’s choice of their favorite cue on display at the ACA booth at the Super Billiards Expo.  Every ACA member can display one cue of which they are especially proud.  Attendees at the show can then cast their votes for their favorite cue.  The cuemaker whose cue receives the most votes will be recognized with the “Peoples Choice Award.  Last year’s winner was Pete Tonkin.

Pictures of the award winners and the winning cue will be posted after the presentations on the ACA website:  www. cuemakers.org.