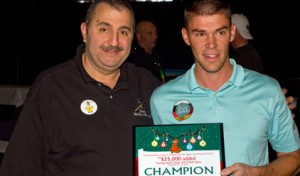 Corey Deuel Takes Win at Turning Stone XVI Corey Deuel has defeated Stevie Moore to claim the champions spot at the Turning Stone Classic XVI in Verona, NY. This week featured some of the most memorable matches of the year with Johnny Archer coming from behind to narrowly escape Karen Corr 9-8 and Dennis Hatch and Earl Strickland shooting at lightning speed in a match that found Hatch emerging the winner.

Many of the weeks matches went double-hill, with three of these coming in a row on the AZBilliards/Accu-Stats free live stream. Our two finalists took a long road on Sunday to reach their final showdown. The day began with four matches on tap. On the one-loss side Hunter Lombardo came on strong to defeat a resurgent Earl Strickland 9-8 while Gabe Owen controlled Tom D’Alfonso 9-3 to progress.

On the winner’s side Corey Deuel defeated perennial Turning Stone favorite Dennis Hatch 9-7 and Stevie Moore destroyed Mike Dechaine 9-1. This set up the next pair of match-ups on the one-loss side of the brackets. Here Mike Dechaine took down Hunter Lombardo 9-5 and Dennis Hatch stayed alive by besting Gabe Owen 9-2. Hatch and Dechaine then paired off and Dechaine never gave Hatch much air as he dominated the big man to win 9-4.

Meanwhile, the hot seat match between Corey Deuel and Stevie Moore turned into an endurance-testing 2.5 hour marathon that finally resulted in Deuel claiming the chair 9-7 after Moore was up 7-6 and running out when he committed a clothing foul that sent him to his chair for the rest of the match as Deuel took control and ran the rest of the racks to grab the win. This meant that Moore had to return to battle immediately against Dechaine and prevailed 9-5 there to earn both a bit of revenge and his honors into the finals rematch against Deuel. Deuel took control early in the final race to 13 games as he deposited the first three 9 balls. In rack four Stevie played a safety on the two ball that could have allowed Deuel to continue his winning ways as he left a narrow window to the 2 ball open with the 9 ball sitting nearby in the jaws of the corner packet. But the combination attempt went awry and Moore returned to the table to lay waste to the rest of the rack to score his first bead at 3-1.

Our combatants traded blows the next three racks to find the score at 4-3 in favor of Deuel at the end of the first hour of play. In rack number eight Deuel played a nifty carom off of the 1 ball to pocket the 9 in the corner and stretch his lead a bit to 5-3. Deuel continued to slowly pull out and after three more racks led Moore 7-4 in our race to 13. At the two-hour mark the score saw Deuel leading 9 games to 5 and our holiday crowd was entertaining dreams of sugar plums and shot clocks. In rack #13 Deuel was on his way through the rack when he scratched on the 7 ball and left Moore an easy two-ball out to move within two games at 10-8. Moore then began to claw his way back into contention and, taking advantage of a couple of missed steps by Deuel, tied us first at 10 games and then took the lead at 11-10 before Deuel captured another rack to tie us again at 11.

Our race to 13 was now a race to 2 games for the win. In his attempt to gain the hill first Stevie Moore landed to straight on the 8 ball and had to settle for a long cut on the 9 ball. He jawed that in the corner, gifting the hill position to Deuel. Deuel then made a ball on the snap and had a shot on the 1. He made that and then made a long shot on the 2 ball. THe 3 went into the foot corner and he played three-rail shape on the 4. The 4 dropped obediently into the side pocket and the rest of the rack lay out before him in a simple pattern. When he put the 8 into the corner the cue ball rebounded off of the rail into the 9 and drove it into the opposite corner for the win. Our thanks go out to Mike Zuglan and the Joss NE 9-Ball Tour for hosting a marvelous week of pool. The sponsors of this event include the Turning Stone Casino, Simonis Cloth, Joss Cues, Webb Custom Cues, Cameron Custom Cues, Samsara Cues, World CLass Cue Care, Billiards Press, Totalpool.info, Tiger Billiard Products, OB Cues, Poolonthenet.com, Cue-Z Products, Cue Shark, Billiard Community.com, and AZBilliards.com.