USA Maintain Lead but Only Just

USA Maintain Lead but Only Just 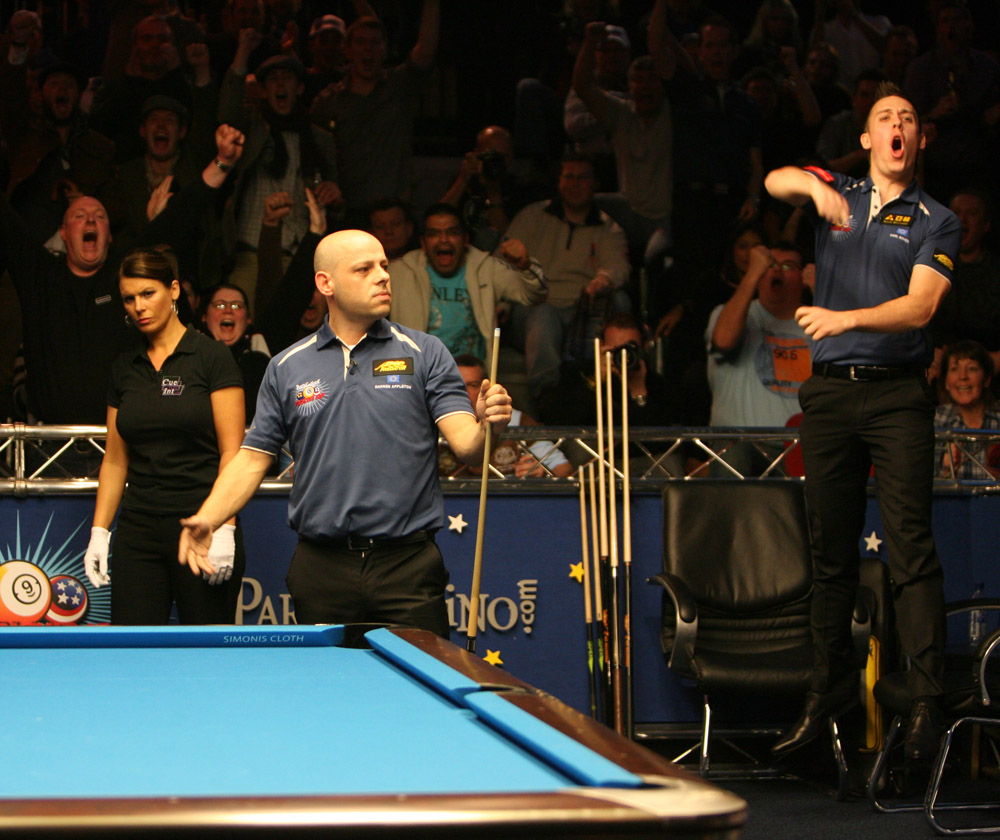 IT WAS all square in the Friday night session of the 2010 PartyCasino.com Mosconi Cup as both teams scored two points apiece. That leaves the USA just a single point ahead and the feeling is that this years event will go down to the wire.

Three of the four matches were decided by the single rack as if to emphasise the closeness of the competition. The final match was a high-quality encounter which saw Shane Van Boening edge past Nick van den Berg in a match that either player could have won.

It all came down to the final rack when Van den Berg got to the table but was forced to play safe after a poor positional shot. Van Boening blasted the cue ball across the table and managed to fluke the two into the middle pocket. One pot and a 3/9 combination and it was all over and America went to bed as Mosconi Cup leaders.

In the barn-storming show-opener, Dynamite Darren Appleton and Karl Boyes raised the roof of the York Hall as they overcame Johnny Archer and Shane Van Boening to level the overall score at 2-2.

6-3 was the score and it was a match full of nerves, atmosphere, misses and some brave shot-making mainly from Darren Appleton. His match-winning shot was indicative of his play in general as he slam-banked the 9 ball back up table.

Boyes enjoyed some traditional Mosconi Cup banter with Dennis Hatch who was sitting in the stands and at times the crowd got over-exuberant but it was a typical York Hall Mosconi Cup match of days gone by.

Boyes who made his fair share of mistakes, including a 9 ball to win the match was honest in his assessment; “That shot was down to nerves. With some of the balls I missed my mindset was not right but for that 9-ball I thought this place will go crazy instead of focusing on the shot, but it’s all a learning curve.”

Appleton was delighted with his form, “I’ve been playing really well for the last couple of months. Last year I didn’t win a point. But here the crowd is amazing and a major help. I like to play in teams with Karl and he’s a good friend and has been for 15 years so this is a dream. We knew we were a great team so to get a point on board for the guys is amazing.”

In the next match, the captains pick where the respective skippers select their opponents players, it was Johnny Archer and Ralf Souquet who took to the arena. Presumably, both players were there for their shakier performance on day one but it turned out to be another thriller.

Archer took a big 4-0 lead as Souquet looked once again out of sorts, but the Kaiser found some form out of nowhere and before long the score was 5-4 in the Germans favour as Archer looked shell-shocked.

The miracle comeback was not to be though as the Scorpion took the next two racks to restore the USA one point lead.

“Ralf is one of the best players in the world so it didn’t surprise me that he came back. I didn’t do that much wrong or make too many mistakes but he just played well and did what he does to put himself in a position to win said Archer.

“It’s hard out there and just different to normal. I would like it a lot more if the crowd was on my side but they’re there for their team and having a good time so I can’t say anything bad about it.

“But the crowd boo me during the match but after it’s over they give me respect and that makes me feel better. You know it’s not just you, they’re just rooting for their team.”

There was another towering performance for Yorkshires Darren Appleton in the third match of the evening as he and Ralf Souquet nicked a point from Rodney Morris and Corey Deuel to once again level things.

Appleton who has a miserable time of it last year in his Mosconi Cup debut in Las Vegas, is fast becoming the heart and soul of the American side as he came with the critical shots at the right moments.

The win was also a terrific boost for Souquet who had been on the wrong end of two narrow score lines and looked to be short on confidence.

In a nip and tuck affair, the USA reached the hill first and breaking for the match, Deuel delivered a good one. Their visit came undone though as Deuel played an inexplicable shot and massively overran the cue ball. Morris’s attempt at a safety left everything on for Europe and they took what was a thrilling match to the hill.

In the final break of the match, Appleton delivered a pearler as three balls dropped and there was a clear shot on the two ball. They completed the run out for the win and Appleton danced with delight, even planting a kiss on Souquets cheek.